Years after the Olympia Brewing Company was sold, a new brewery in the state capital looks to the same artesian spring for inspiration 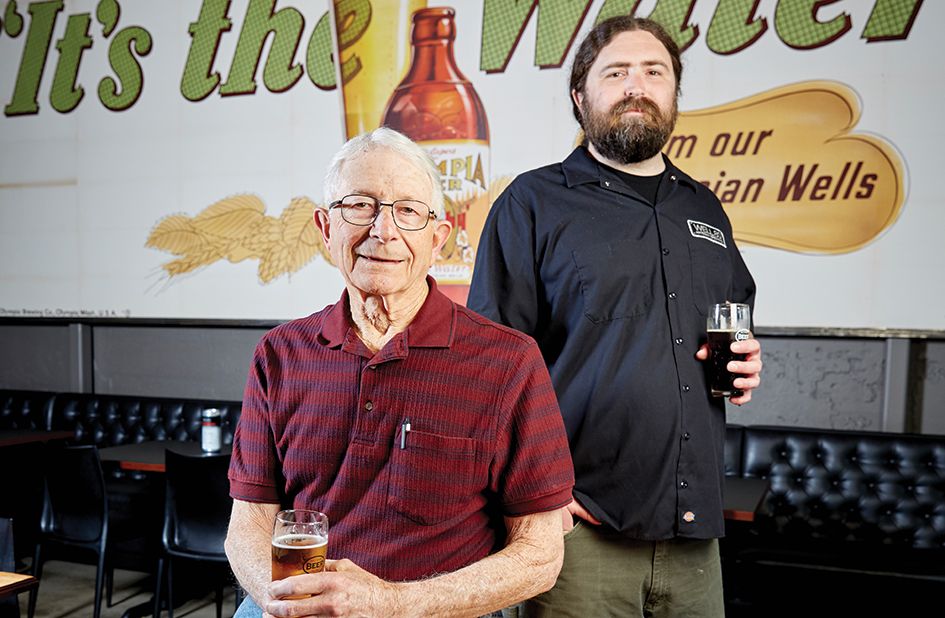 In 1895, montana politician and brewery co-owner Leopold Schmidt visited Olympia to scout for inspiration as his state prepared to design its Capitol building. However, rather than return to Montana, he decided to remain here, not for the stately architecture, but because of an enchanting artesian spring near Tumwater Falls.

A year later, Schmidt’s new business—the Capital Brewing Company, which later became Olympia Brewing Company—was producing a light lager and a bock (a stronger iteration of the lager style) made with the spring’s pristine waters. Schmidt meticulously managed his brewery’s yeast strains to ensure strong, healthy cultures, an innovative approach in 1896. A six-story brewhouse built in 1906 became the tallest building in Thurston County. Demand was high: “He ended up with the cleanest, most consistent beers of all his competitors,” says Paul Knight, Olympia Brewing’s brewmaster from 1961 until he retired in 1997.

Over the years, the brewery’s popular ad slogan, “It’s the Water,” credited the appeal of Schmidt’s beer to its water source: an artesian aquifer deep below Olympia that collects water flowing from the Cascade Mountains. Along the way, that water goes through a natural filtration process and picks up minerals. “It was perfect right out of the ground,” says Knight.

When the Tumwater brewery closed for good in 2003, a part of Olympia’s culture, history and economy was shuttered, too. Although the City of Tumwater is actively working to restore the 1906 brewhouse tower and eventually to open a craft brewing and distilling center at the brewery complex, progress seems slow, and redevelopment is complicated.

But in the meantime, there’s Well 80 Brewery and Brewpub (Olympia, 514 Fourth Ave. E; 360.915.6653), which opened in downtown Olympia last year and is working to restore Olympia’s legacy as a beer lover’s destination. The modern industrial brewhouse sits atop one of downtown Olympia’s 96 artesian wells; 35 gallons of water at a constant 53 degrees Fahrenheit flow into the brewpub every minute through a metal pipe at the back of the building. Other wells in town have been paved over or built around, but well number 80 gives the upstart brewery access to the H2O that put Olympia Brewing on the map. “We take a lot of pride in bringing some of that history back through our beer,” says head brewer Paul Pearson.

Although technically retired, Knight still plays a vital role in bringing that history to the forefront. (He met Well 80 owner Chris Knudson through their involvement with the Olympia Historical Society.) On production days at Well 80, he shares his encyclopedic knowledge of Olympia Brewing’s recipes and processes. Combined with Pearson’s craft brewing expertise and Olympia’s cool, clean artesian waters, the two re-create vintage beers engineered to appeal to today’s craft beer aficionados. From the Original Lager ’64 to the Original Dark ’66, the beers from their collaboration are rooted in retro methodologies that reflect Olympia Brewing’s heyday. WELL PAIRED: Well 80 offers a range of food options to pair with its craft beers

Well 80’s facility is different than that to which Knight had been accustomed. The kettle he worked with at Olympia Brewing was 80 times larger than Well 80’s. Today’s craft brewers also don’t have space for lab facilities or testing apparatus to create the same beer batch after batch, as previous brewers did, and that’s not a bad thing, Knight says. “It’s part of the allure of craft beer. As long as it’s similar and tastes good, that’s great.”

Well 80 gives locals a connection to their city’s history, one sip at a time. “There has never been a better time to be a beer drinker,” Knight says.

Original Lager ’64
(4.2% ABV)
A reinvented classic, this American light lager put Olympia Brewing on the map. The Original Lager ’64 is slightly more flavorful than its predecessor, but remains balanced, refreshing and drinkable.
Pair With: Grilled meats, such as the Paris Bistro steak frites at Well 80.

Original Dark ’66
(4.5% ABV)
A modern twist on an Olympia Brewing cult favorite that was never distributed outside of the region, this dark lager has a full-bodied, roasted richness, with caramel, chocolate and coffee notes and a deep ruby red color.
Pair With: Sweet treats and desserts like s’mores.

Volle Pulle! Hefeweizen
(5.0% ABV)
This southern German–style hefeweizen, which earned a silver medal at the 2019 Washington Beer Awards, is more flavorful than its American contemporaries, with touches of banana and clove, soft acidity and a dry finish.
Pair With: Bratwurst or another meaty dish.