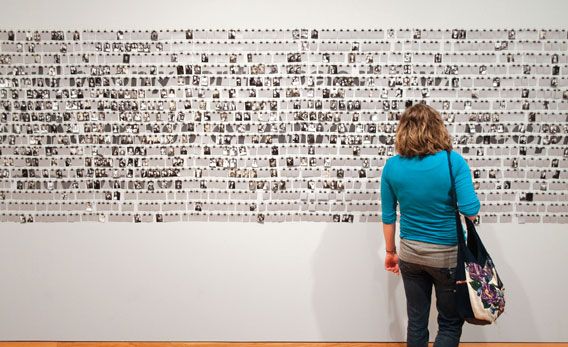 Best case of life imitating art
Love, fear, pleasure, lust, pain, glamour, death. But enough about you. Seattle Art Museum patrons could see pictures of us and several thousand other visitors at the Andy Warhol exhibit (called love fear pleasure lust pain glamour death) on the gallery’s wall of photo booth strips. Because of inflation (and Facebook), our 15 minutes of fame have been extended indefinitely. See the results at facebook.com/seattleartmuseum (click on “Photos,” then “Andy Warhol Photo Wall”).

Best way to feel this much closer to Jon Hamm
Even though the ad execs on AMC’s Mad Men already behave as though every day is humpday, local independent filmmaker Lynn Shelton (We Go Way Back; My Effortless Brilliance; Humpday) had a thing or two to show them about film directing. She got her chance recently when she called the shots as director on an episode of season four called “Hands and Knees,” which aired September 26 and does not refer to scrubbing the floor. Taming the overactive egos of the partners at Sterling Cooper Draper Pryce was a logical next step for the talented Shelton. Her films are known for their quirky originality and unscripted improvisation, and once again she has proven herself adept at sculpting people’s messy lives into believable narratives.

Best combination of art and sports
Turns out getting paid for artistic work is as simple as using Crayons. Local artist Diem Chau (tinyhaus.blogspot.com) was recently commissioned by the Portland-based advertising agency Wieden + Kennedy to sculpt 66 tiny totems from the unassuming waxy sticks. The mini-sculptures, which feature likenesses of soccer greats such as Didier Drogba (in copper, introduced by Crayola in 1957) and Robinho (in silver, introduced in 1949), were part of a Nike promotion for the 2010 World Cup. Chau rates a resounding GOOAALLL for this one.

Best way to stop ringing in the ears
It’s almost 2011, people. At this point we’re pretty familiar with how cell phones work. So why are they still going off during live performances? Seriously, how hard can this be? The talented folks at New Century Theatre (newcenturytheatrecompany.org) broached the subject last May during the run of On the Nature of Dust at ACT Theatre. Arriving audience members were greeted with a sign echoing those on highways noting the number of days since a forest fire, or at a construction site, tracking days since the last accident. “Performances without a ring,” it read. (The number was 17 on the night in question.) “Help NCTC become America’s first cell phone free theatre.” Bravo. Best way to bring art to the masses
A billboard-size mobile gallery that traveled to various Seattle art walks between June and October, Gallery 40 (gallery40.com) not only made art extremely accessible, it also gave exposure to local artists who had never had a solo show. (The roving gallery also aided the artists in applying for grants to fund their work.) Curated by local photographer Todd Jannausch, shows featured the work of graffiti artists, photographers, poets and painters, including Lauren Klenow, Daniel Carrillo and Counsel Langley—all artfully arranged inside the 40-square-foot space. Whaddya know? Just like chickens, art is happiest when it’s free range.

Best musical incubators
Since its humble beginnings in 1979, Issaquah’s Village Theatre (villagetheatre.org) has become known as an incubator for Broadway and off-Broadway musicals—in fact, the theater’s former associate artistic director, playwright Brian Yorkey, shared with writing partner Tom Kitt a 2010 Pulitzer for their play, Next to Normal, the Tony-winning rock musical that had its debut at Village Theatre. (The national tour of Next to Normal will be staged at the 5th Avenue Theatre in March 2011.) And speaking of the 5th Avenue Theatre (5thavenue.org), it is no slouch when it comes to incubation: Its coproduction (with the La Jolla Playhouse) of the rock ’n’ roll musical Memphis was nominated for eight Tonys in 2010 and won four, including Best Musical and Best Original Score.

Best way to get the masses to watch modern dance
You might think four consecutive evenings of modern dance, featuring performances by 12 different local dance companies, would be something for which only the most hard core of dance fans would be game. But when On the Boards turned this scenario into a game of sorts last December—having the audience vote for the winners each night, including the final dance-off—the theater sold out four nights in a row. Called The A.W.A.R.D. Show and held in partnership with New York’s Joyce Theater Foundation, the competition was a complete—and controversial—smash, which had the arts blogosphere afire debating whether “non-dance audiences” would really understand what the “best” performances were, and whether that was good or bad. Either way, packed houses for local modern dance is a big win (just ask prize winner Amelia Reeber, who took home $10,000). It’s happening again—with all new local companies—January 27–30, so get your tix pronto (ontheboards.org). Best performance by a local actor and actress
It’s customary during live theater performances to be vaguely aware of constant sounds and movement in the audience—somebody has the sniffles, somebody else has a throat-clearing tic, the guy in row H shares every thought in a stage whisper, and the lady in row D is determined to get that candy out of its wrapper. But in two instances, audiences were so enraptured by performances that they were stunned into silence. In January, Marya Sea Kaminski starred in Seattle Shakespeare Company’s Electra, and when we say starred we mean as in a sun—her performance was a luminous, celestial body with a gravitational pull. In April, during An Iliad at Seattle Repertory Theatre, Hans Altwies roared, cajoled, entranced and broke hearts as a poet telling a war story as old as time and as fresh as a bleeding wound.

Best lemonade made from lemons
STart (the Sound Transit Art Program) is beautifying the two-block hole in the ground that Capitol Hill residents will have to walk around for the next four years as the city builds a light rail station next to Cal Anderson Park. The project, curated by artist D.K. Pan and titled “The City: Love, Loss and the Moveable Future” (startwallproject.blogspot.com), turned a giant construction wall into an art gallery accessible to all who pass by. Nearly 30 local artists have been tapped to participate in this ongoing exhibit, including the Seattle Experimental Animation Team, a group of local animators that is painstakingly painting, filming, repainting and filming eight animations on the wall for a cumulative installation called “Wallrus.”

Best lemons to lemonade, lutefisk edition
Arts activists Anne Baumgartner and Pam Gray (with the support of local businesses) used donated supplies and their own creativity to beautify the chain-link fence surrounding the space in Ballard formerly known as Sunset Bowl (which was supposed to become a condo building, but ended up an unsightly vacant lot). Called “On the Fence” (onthefence2010.blogspot.com), the temporary installation turned an eyesore—at least briefly—into eye candy.

Best reason to cross the lake
Since its inception in 2007, Bellevue’s Open Satellite Gallery (989 112th Ave. NE, Suite 102; 425.454.7355; opensatellite.org) has been offering three-month residencies to emerging and midcareer artists, both local and international, supporting them as they create large-scale works in diverse media. (Each residency culminates in an exhibit in the lofty gallery space housed in the bottom of a luxury condo building.) But since Seattle art scenester Yoko Ott, previously at One Reel and the Frye Art Museum, took the reins as director in late 2009, Open Satellite has truly taken flight. Under her guidance, the gallery has featured bleeding-edge exhibits by California installation artist Primitivo Suarez-Wolfe, the English avant-garde team of Heather and Ivan Morison, and Japanese video artist Meiro Koizumi. Go, Yoko, go.

Best (and last) still-funky thing in Fremont
Anyone who is feeling nostalgic for Fremont’s pre-condo glory days of community solidarity should hie to volunteer-powered Fremont Abbey Arts Center (4272 Fremont Ave. N; 206.414.8325; fremontabbey.org). The Abbey, a 9,000-square-foot former church at the top of the hill, offers group classes, workshops and public events for all ages in everything from modern dance to self-defense to yoga for cyclists to vegan arts. Do not miss The Round, a monthly mash-up of songwriters, poetry slammers and painters (theround.org).

Best karaoke-inclusive art
There was a lot of karaoke incorporated into contemporary local art this year. A lot. Western Bridge director Eric Fredericksen did a two-part lecture/performance called “Speak & Sing: Contemporary Karaoke Practice.” Amy O’Neal’s dance company, Tiny Rage, asked audience members to do speed karaoke during intermission at her March performance of “Too.” In April, performance artist Mike Pham made a cardboard-karaoke machine as part of the Strange Coupling show at Ouch My Eye. But perhaps the most successful (and certainly longest-running) karaoke art experiment has been Frances Farmer Organ Karaoke (every first and third Thursday at Vermillion Gallery; ffok.net). The bizarro brainchild of Seattle performance artist Korby Sears, FFOK invites all comers to sing (or shout, recite, make use of the megaphone) to pop music, which he plays on an old-school organ. Yes, you have to be there to get it. And you should.

Best reason for a name change
Since 2002, Bellevue arts aficionados have been struggling to secure funding for an across-the-lake venue known as PACE (Performing Arts Center Eastside) to host world-class theater, dance and music performances. This past June, the Bellevue-based Tateuchi Foundation saved the day with a $25 million donation that will finally bring the dream into being. The newly named Tateuchi Center is now in motion—it will include both a 2,000-seat concert hall and 250-seat cabaret-style venue—due to be completed in 2013.

Best Way to Make New Yorkers Jealous
There are many cool things about Picasso: Masterpieces from the Musée National Picasso—the size of the collection, the fact that the works are those Picasso himself hoped to be remembered by, the way the Seattle Art Museum has connected the exhibit with its wider collection by calling out Picasso’s influences and influence-ees—but perhaps the coolest thing is that Seattle is one of only three cities in the U.S. (seven worldwide) selected to present this tremendous show. And New York City isn’t among them!

Best Example of Interactive Art
“Interactive art” gets a lot of lip service, but rarely does the concept inspire the fervent response generated by Ryan Molenkamp’s Portrait Challenge project (flickr.com/photos/theportraitchallenge), as seen at Bumbershoot this year. Its simplicity is part of its brilliance: Molenkamp posts a photo of a celebrity or citizen model on an 8 ½-by-11-inch piece of paper, and under the photo, six blank boxes beckon artists at all skill levels (including minus 10) to draw their interpretations of the photo. It’s inviting, non-threatening fun—and the cumulative page makes for a fascinating survey of the human artistic impulse. People went nuts for it at Bumbershoot, and will likely again this month and next, when a new Portrait Challenge is posted at the Seattle Art Museum (in the Think Tank space) for the duration of the Picasso show. Nice save!
We all know from reading bumper stickers that Art Saves Lives. But sometimes art (and artists) must save their own lives. Such was the case for several local arts venues that had to find new digs this year in the face of soaring rents and diminishing arts incomes. Berets off to Elliott Bay Book Company (1521 10th Ave.), Velocity Dance Center (1621 12th Ave.), Lawrimore Project (117 S. Main St., Suite 101), Taproot Theatre (still at 204 N 85th St., but kudos for rebuilding after the Greenwood arsonist fires), and Canoe Social Club (417 E Loretta Place). We’re thankful for these rebirths (which could well have been deaths), and we’re pulling for Grey Gallery (which at press time was still a gallery in search of a new space) to soon join their numbers.