This article originally appeared in the December 2012 issue of Seattle Magazine. 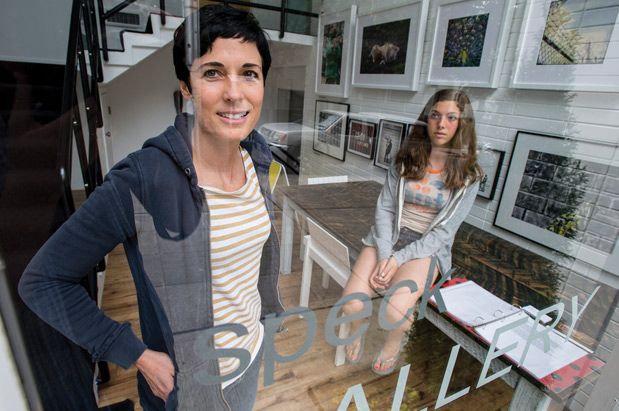 Visual Arts
BEST NEW CONTEMPORARY ART GALLERIES
Good news: This year saw so many new art gallery openings that we couldn’t pick just one. For socially conscious artwork from beyond American shores, we love M.I.A Gallery downtown, whose narrow space only elevates the impact of the work. Capitol Hill’s Blindfold Gallery has done a splendid job of showcasing work by local, emerging (and affordable) artists in its charmingly funky former office space. Finally, we adore Speck Gallery for its eclectic but strong collection of work from emerging local artists, all housed beautifully in a tiny, two-story lobby space that gives us hope that Belltown can make a comeback.

BEST SCULPTURAL ART
Dan Webb at Greg Kucera Gallery
We’ve loved Dan Webb’s sculptural work for more than a decade, but this year his show at Greg Kucera blew our minds. For Destroyer, Webb carved stunningly realistic arms, bones, hands and running shoes from huge blocks of fir and maple, leaving them attached to the raw wood via carved chain link. The effect was one of instant recognition—of the human striving toward what we desire, whether it’s perfection or reckless abandon, all while chained to the anchor of who we are at the core. BEST NEW ART COLLECTING RESOURCE
ArtsYo!
So many local art galleries, so little time. In Seattle, we are both blessed and burdened with a surfeit of local art—so much that it can be overwhelming. Founded last summer by Seattle arts aficionados Stella Laurenzo and Sarah Brooks, ArtsYo has come to the rescue, with its online art matchmaking service that pairs locally made art with eager buyers. Visit the site and browse acres of art—including work by Seattle luminaries Luke Haynes, Serrah Russell, Joey Veltkamp, Ryan Molenkamp and Counsel Langley—or specify your search by artist name, gallery neighborhood, color scheme, shape, size and/or medium. Talk about love at first sight.

BEST MULTIMEDIA ART
Susie J. Lee’s ‘Still Lives: Exposure’ at Frye Art Museum
Deeming a 30-minute, looped video of an elderly woman slumped over and napping “art” is risky business. But Seattle artist Susie J. Lee knows what she’s doing. Skillful lighting and composition made her piece “Still Lives: Exposure” feel more like a Baroque painting than new media. And though the video—shown in her first solo museum exhibition, at the Frye—left us to reckon with an old woman, barely moving, Lee offered a compelling and memorable challenge: to remember that breath is a beautiful, intimate exchange.

MOST USEFUL ART
Mark Mitchell’s silk urn
Greg Lundgren’s ongoing quest to revolutionize the death industry includes holding invitational shows at his First Hill gallery, for which artists create new takes on the cremation urn. For last spring’s show, The Softer Side of Death, the focus was on fiber urns, the most stunning of which was created by local costume designer Mark Mitchell. Dyed in watery orange and sea foam tones, the silk cinch bag resembled a large sea urchin and was designed to be thrown into the sea, where, in a nod to impermanence, it would eventually disintegrate. It must be said: That bag was to die for.

FUNNIEST ARTS TUMBLR
First Thursday Art Schlock (firstthursdayartschlock.tumblr.com)
Let 2012 be remembered as the year the animated GIF made a comeback, thanks to viral blogs pairing looped clips from movies, television and YouTube with hilarious captions. Cut to Seattle, where the newly created, intriguingly anonymous “First Thursday Art Schlock” Tumblr perfectly skewers the local art scene with captions such as “Portrait of a Seattle Art Career” paired with an animated GIF of a man eternally trying to walk up the down escalator. Excruciatingly honest, and totally fun. BEST DANCE PERFORMANCE/IMMERSIVE EXPERIENCE
Petruchska/Spectrum Dance Theater
Donald Byrd’s reimagining of Igor Stravinsky’s ballet Petrushka, a puppet story about love gone bad, fully transformed Spectrum Dance Company’s Madrona Bathhouse. Audiences were herded into different spaces for each new scene, eventually into a spooky, airless prison for puppets, which the Spectrum dancers rendered not just real, but sympathetic. In one room, dancers performed live but hidden on the other side of a curtain. We could hear their breathing, feel the weight of their jumps, but we could only see their movements from a distance, via a wall of television screens showing the dance from so many different angles that it looked as though more than one performance was in progress. The result: a tortuously grimy, voyeuristic and affecting view of misdirected affections.

BEST DANCE PERFORMANCE/USE OF NUDITY
This Land Is Your Land/Mark Haim
Those of us exposed to a lot of contemporary dance are also exposed to a lot of nudity. It seems dancers are constantly stripping down—a choreographic way of exclaiming, “Oh, the humanity”—but too often nakedness is used to make an impact when the quality of the work isn’t strong enough to do so on its own. Not so in the case of Seattle choreographer Mark Haim’s piece This Land Is Your Land, at On the Boards, which charmed with its simple, repetitive energy: a phalanx of dancers of all shapes and sizes walking from upstage to downstage and back, as if on a superwide fashion runway, in an ever-evolving series of costumes—which happened to include birthday suits. The joyful, playful, edifying gesture rendered nudity shockingly, refreshingly normal. BEST CROWD-PLEASER
Seattle Opera’s screening of Madama Butterfly at KeyArena
Puccini’s Madama Butterfly is one of the world’s most popular operas—and it became a tiny bit more popular last spring, when the Seattle Opera took the radical step of streaming the live production’s opening night at McCaw Hall to a giant screen at KeyArena. The simulcast was free for the adoring public—more than 5,000 of whom were able to experience Patricia Racette’s astounding performance as Cio-Cio-San on the big screen. The smell of french fries and popcorn in the air? That didn’t hurt a bit.

BEST CLASSICAL UPDATE
Sonic Evolution/Seattle Symphony
Ever since Ludovic Morlot took the maestro reins in 2011, the Seattle Symphony has been implementing innovative programming that proves orchestral music doesn’t have to be mired in the past. Perhaps the most exciting of the new programs is Sonic Evolution, for which the symphony commissions contemporary composers to write new pieces based on the work of Seattle music heroes. The first edition spun complex and insightful works from the music of Nirvana, Quincy Jones and Jimi Hendrix; the second put a symphonic twist on Alice in Chains, Yes and Blue Scholars. Bravo!

Theater
BEST ACTRESS
Anne Allgood
Allgood reigned supreme as the Queen of Scotland in 2011’s Mary Stuart at ACT, and this year she continued to hold sway—in particular, thanks to her work in ACT’s Pinter Festival. As Anna in the tight, tense Old Times, Allgood rose to the challenge presented by Pinter’s legendary silences, speaking volumes with her present, precise performance as the dangerous corner of a contentious love triangle.

BEST ACTOR
Darragh Kennan
Kennan is hardly a shocker for this category—he’s been doing impressive work in Seattle theater for years. But this year the actor rocked several performances, including an artfully played racist in Clybourne Park at the Seattle Rep, and two roles in ACT’s Pinter Festival: a panicky and remorseful hit man in The Dumb Waiter, and a loquacious, nostalgic waiter in Celebration. In all of the above, Kennan brought the acting magic, making us believe he was someone else entirely.

BEST NEW PLAY
Torso
Local playwright Keri Healey’s Torso (at Theatre Off Jackson) had us unable to look away from her tale of dark thoughts taken to darker places—even when we wanted to cover our eyes. Dual storylines followed a fratricide committed over a small financial dispute, and a woman so angry about her sister’s wrongful death, she can’t stop thinking about how to avenge it. The remarkable cast included Sarah Rudinoff and Stephen Hando, who channeled the ever-building tension to its deliciously disturbing conclusion.

Literature
BEST BOOKS BY LOCAL WRITERS
Where’d You Go, Bernadette? by Maria Semple
Semple hoists Seattle on its own artisanal petard in this rollicking novel, which pokes fun at our city’s eccentricities with a high-energy, often laugh-out-loud storyline in which Bernadette’s daughter attempts to figure out what led to her mother’s breakdown and disappearance. The humor is artfully balanced with a dose of genuine insight about the best and worst ways to deal with our own failures.

The Revised Fundamentals of Caregiving by Jonathan Evison
A former stay-at-home dad who has lost everything he loves embarks on a funny, touching road trip with a ragtag crew of troubled souls in this compelling novel. The Bainbridge Island–based author has an uncanny knack for writing prose that roils across the page, sweeping readers up for the ride. With careful character studies and raunchy wit, Evison turned what could’ve been a standard tale of redemption into a thoroughly original and memorable tale. BEST LOCALLY MADE ANIMATED FILM
Hi! I’m a Nutria by Drew Christie
Local animator/illustrator Drew Christie—a Seattle mag Spotlight Award winner whose short film Song of the Spindle was a 2012 Official Selection at Sundance Film Festival—took a stand on behalf of a certain maligned species of giant rodents that haunts the shores of Lake Washington. Part history lesson, part public service announcement, this charming hand-drawn animation gently admonishes: The next time you decide to impugn an invasive species, stop and look in the mirror.

BEST LOCALLY MADE FEATURE FILM
Eden by Megan Griffiths
The Seattle film scene is smokin’ this year, thanks in no small part to filmmaker Megan Griffiths, whose latest feature, Eden, is as important as it is beautifully made. Griffiths directed and cowrote this harrowing, hard to watch and utterly gripping tale (based on a true story) about a Korean-American girl forced into prostitution in the Southwest (yes, the southwestern United States, as played by Eastern Washington). The film serves as an eye-opening call to arms as Griffiths elucidates the many factors that allow the American sex trade to succeed in its appalling business.