Our city hosts a bounty of boutique chocolate shops.

This article originally appeared in the February 2013 issue of Seattle Magazine. 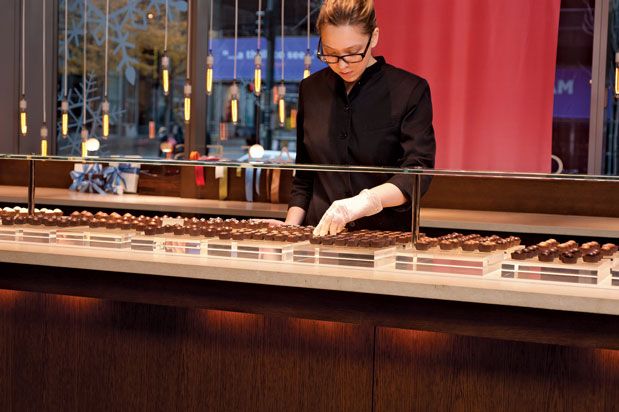 Intrigue Chocolates Co.
Aaron Barthel says he wanted to be a mad scientist when he grew up. That dream nearly led him to a career as a botanist, until he spotted a recipe for chocolate ganache truffles in a botany magazine his mom had sent him. Now this Pioneer Square–based child of Minnesota dairy farmers is whipping up maddeningly good truffle bars, ingeniously infused with plant-world superstars such as organic basil, bay leaves, añejo tequila with fresh lime zest, and black tea with fresh sage. You can sample his creations—he has more than 150 flavors of truffles—in a special pairing with spirits at downtown cocktail bar Vessel, or better yet, make the pilgrimage to Barthel’s hidden kitchen and quasi-retail space with a speakeasy feel, where, if you figure out how to ring the old-fashioned doorbell, he’ll teach you the scientific approach to a total chocolate geek-out. $2 per truffle, $20 for a box of 12, $9–$12 for truffle bars.
76 S Washington St., Suite M104; 206.829.8810; intriguechocolates.com

Fran’s at the Four Seasons
From the pointillist truffle mosaic on one wall (a portrait of owner Fran Bigelow’s granddaughter) to the line of eager tourists at the counter, Fran’s Chocolates’ flagship store in the Four Seasons Hotel, just south of Pike Place Market, is Seattle’s classiest chocolate spot, an elegant, cream-colored reflection of the time Bigelow spent chasing chocolate in Paris. No matter which color ribbon Fran’s is using to wrap her signature chocolate-colored boxes, the swish shopping experience makes one feel gifted—which Bigelow says is her ultimate goal, as if bringing out the true flavor of chocolate isn’t enough. No wonder she’s been in town for more than 30 years.
1325 First Ave., 206.682.0168; additional locations at University Village and in Bellevue; franschocolates.com

Chocolopolis
Queen Anne’s chocoholic haven carries an encyclopedic collection of chocolate bars and cases full of nationally acclaimed truffle makers, including Kansas City’s Christopher Elbow and LA’s Valerie Confections. We like how the spare, sunny store is organized by source region, so a serious taster could learn exactly why some prefer, say, Venezuelan over Ecuadoran chocolate. For an extra $1.50, you can also turn any bar you buy in the store into drinking chocolate. It’s a good plan—by the time you’ve spent 30 minutes dreaming through the cool, climate-controlled 68-degree room, you’ll be looking for a warm-up.
1527 Queen Anne Ave. N; 206.282.0776; chocolopolis.com

Chocolate Box
If your idea of bliss is being hot-boxed by the region’s best chocolates, step into Chocolate Box, the chocolate-packed downtown store devoted not just to chocolate, but to those who make it close to home. From Bainbridge’s Pink Peony to Green Lake’s George Paul to Ballard’s Chocolat Vitale, the store is a who’s who of the local chocolate scene. Now, in addition to its Seattle chocolate tours, Chocolate Box also has weekly evening truffle classes, which pair the chocoholic’s dream DIY project with the store’s deep selection of local wine. It’s the perfect first date.
106 Pine St.; 206.443.3900, tour hotline 206.427.2515; sschocolatebox.com

Oh! Chocolate
You can bet that one of the first things you’ll hear when you walk through the door of any of its four warm and welcoming minimalist shops is “Would you like to try a chocolate?” A family business that began in Hawaii more than 50 years ago, luckily for us, set its roots down in the Pacific Northwest, first on Mercer Island, and now in Bellevue Square, Madison Park and the recently added Normandy Park outpost. From the tropics-invoking mango habañero to luscious dark chocolate Cabernet or the buzz-worthy honey orange caramel, everyone seems to have his or her particular favorite here. And whatever you don’t taste, you can just take home. $15 for box of nine.
Multiple locations in Seattle and on the Eastside; ohchocolate.com (also available through AmazonFresh)

GrendelSweets
Any trip to Crossroads Mall on the Eastside is well rewarded with a pop into the out-of-place adorableness of GrendelSweets, which makes a smooth, creamy and thoughtful handmade truffle with the best of ’em. But at this time of year, you need to stop in for the anatomically correct heart it fashions just for Valentine’s Day. Whether you go for the milk, dark or white chocolate version, this is a confection your sweetheart won’t soon forget. No price at press time.
Bellevue, 15600 NE Eighth St.; 425.644.7119; facebook.com/grendelsweets

Chocolat Vitale
Although Chocolat Vitale had been selling hot chocolate mixes wholesale for nine years, new owner Janet Eicher opened her store east of Ballard/Phinney’s Stumbletown in 2011. Like a well-traveled living room with too many armchairs, it’s a browser’s paradise, with chocolate from around the globe, of course, and also an eclectic mix of retro furniture, vintage dishware and—our favorite—a bubble gum machine that dispenses a big handful of rich dark-chocolate-covered pistachios when you plunk in 50 cents. Don’t miss the Venezuelan dark hot chocolate ($3 for a cup; $18 for 10-ounce mix), made by request from Vitale’s well-loved mix, also available for sale at the shop.
6257 Third Ave. NW; 206.297.0863; chocolatvitale.com

Plus, one worth the drive: Petits Noirs
Located a stone’s throw from Walla Walla, in Milton-Freewater, Oregon, Petits Noirs is a chocolate and candy boutique that’s more Paris than wheat fields and vineyards. The truffles come nestled in boxes that look like they’re made of red leather. The labels are literal works of art, designed by owner Lan Wong to create the feeling of giving something special—like a Faberge egg case for your chocolate. Petits Noirs offers tasting sessions, pairing petit “boutons” (baby chocolates akin to giant chocolate chips, only more interestingly flavored) with local wines. The offerings are strictly seasonal, so while you can bet on a straight chocolate ganache truffle, you might find a rose-petal-infused version one day (too grandmotherly for our tastes), and a fiery chile version the next. Despite the abundance of chocolates, our favorite, after tasting through its store, was the nougat selection—try the barely sweet variety made with Marcona almonds and toasted sweet corn.
Milton-Freewater, Ore., 622 S Main St.; 541.938.7118; petitsnoirs.com (not available online)

No Oompa Loompas at these candy-making centers, but peeking behind the sugary curtain is a delight.

If we could create our dream box of chocolates, these 10 local treats would be in it.

We scoured the city for its best liquid indulgences: thick, rich, hot melted chocolate and milk.