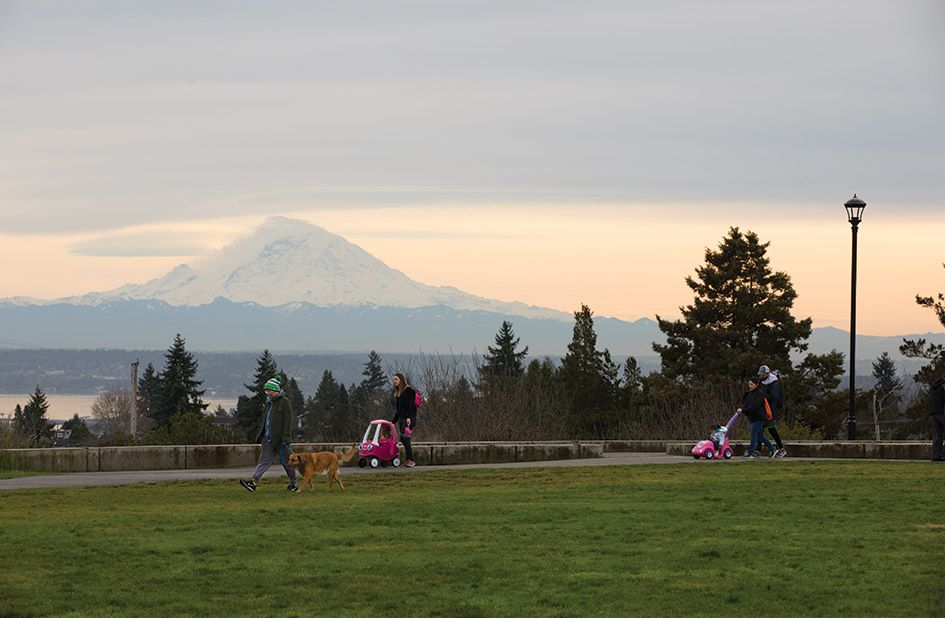 Local lore has it that Seattle’s Maple Leaf neighborhood, snuggled between Northgate and Roosevelt, got its name from being so far north that it may as well be in Canada. When Jill Killen opened Cloud City Coffee there in 2002, at the intersection of Roosevelt Way NE and NE 88th Street, “Nobody knew where Maple Leaf was,” she says. “We were always clumped in with Wedgwood or Green Lake, never our own spot.”

Killen started handing out bumper stickers that read “Maple Leaf 4 Life,” part joke and part community-building effort, she says. Eighteen years later, those bumper stickers—spotted on vehicles ranging from minivans to Mini Coopers—are a badge of honor for the folks who have been in on Maple Leaf’s secret from the start.

Cloud City is the de facto neighborhood hangout, thanks in no small part to Killen’s tireless efforts to make everyone who enters feel at home. When the coffee shop opened, Killen says, the neighborhood was quiet, and predominantly occupied by longtime residents. But she quickly noticed the number of families with young children that would pass by the café’s large front windows. She put in a kids’ corner—with a rug, couch, a few toys and books—and “It’s been a hit since the beginning. Those same kids that were little then are in high school now, and we’re hiring them as bussers.”

The café’s location makes it the perfect pit stop before walking two blocks south to the Maple Leaf Reservoir Park, a 16-acre park constructed in 2013 on a concrete lid that covers a 60 million-gallon reservoir. The park includes a half-mile track—with peekaboo views of both downtown and Mount Rainier on a clear day—and a playground, where kids swing and run and squeal from dawn to dark, regardless of the weather.

The entire neighborhood seems to have been designed for (or maybe by?) kids: Neighborhood favorite Kona Kitchen has big plates of Hawaiian food, pink guava cake and nary a vegetable in sight; Math ’n’ Stuff, in business nearly 30 years, sells puzzles and games and hosts the coolest Lego-building birthday parties; and Reckless Video remains the last family-owned video rental shop in the city, the only place where you can find some of those old-school films, like My Neighbor Totoro, that haven’t made it to Netflix. Robin Sheridan, a Compass Real Estate broker and attorney, says she’s taking clients through Maple Leaf homes more and more these days, “because prices [dropped] a little bit after the boom of Roosevelt, and because the rezoning [allowing larger developments and closer housing] has pushed people north who crave a little more space and less density.” Single-family 1940s bungalows, classic mid-century modern houses and boxy new construction dominate the rental and buying market. The location, too, works well for working parents: I-5 runs along the neighborhood’s west edge, and when the new light rail stations at Northgate and Roosevelt (to the north and south of Maple Leaf) open next year, a downtown commute will take only 10–15 minutes. Not that you’ll want to leave. “If you’re in Maple Leaf, you likely live there,” Sheridan says. “It’s a spot to land at the end of a busy workday and feel comfortable and settled.”

Indeed, it’s a community that feels like home. “We want people to come in in their pajamas and feel OK with that,” Killen says. “I’ve thought about fancying [Cloud City] up, but that’s just not us.” It’s not Maple Leaf, either.

Best for: Families with children
Typical home value: $734,359
Typical rent: $1,948
Walk Score: 68
Arts and Culture: The Northwest Puppet Center is keeping puppetry alive; Early Masters offers fine arts history classes for kids.
Food and Drink: The Shambles is a 21-and-older bar and restaurant that house-cures its own charcuterie—it’s arguably the best date night destination in the neighborhood. For beers and food in a kid-friendly place, go instead to The Growler Guys.