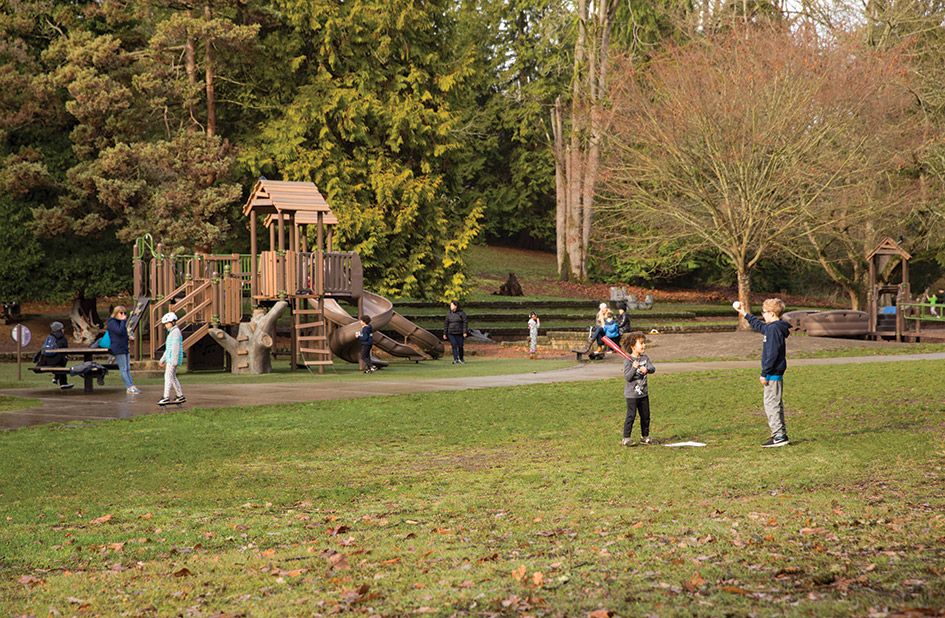 As you drive south from Mount Baker Beach, majestic old trees give way to sprawling water views along Lake Washington Boulevard S. Continue down this stretch of public access waterfront—or ditch the car on Bicycle Sundays during the summer, when a section of the boulevard is closed to car traffic—and you’ll soon land at Mount Baker Rowing and Sailing Center, another recreational perk making Mount Baker a prime neighborhood for those looking to prioritize time in nature without straying too far from the city’s core.

If you spot people pointing toward the sky during your journey along Lake Washington’s western edge, “that’s usually because there’s an eagle,” says Flora Fleet, a broker at Windermere Real Estate Mount Baker and board member for the Mount Baker Community Club. Fleet, who has lived in the lakeside neighborhood, tucked between Leschi and Columbia City, since 2006, has taken to traversing the area’s hills and hidden stairways with a neighborhood running group. “[Mount Baker is] very vibrant and full of nature for being so close to the city,” she notes.

From downtown, whether by light rail from the Westlake station or by car, the trip to Mount Baker takes less than 20 minutes, yet the neighborhood’s Olmstedian boulevards and parks evoke a sense of suburbia, further enhanced by the grand columned homes perched along Cascadia Avenue S and other hilltop blocks. Plus, quick access to the I-90 on-ramp makes it easy to get out of town. Both Snoqualmie Falls and the Rattlesnake Ledge trailhead are less than 40 minutes away. Cocktail vibes at The Velvet Elk. Photo by Alex Crook.

While the area is known for older, Craftsman-style houses, an increasing number of modern townhomes and apartment buildings are popping up, especially near Rainier Avenue S, home to the neighborhood’s public transportation hub: the Mount Baker light rail station and the Metro bus transit center, which are currently located on opposite sides of the busy thoroughfare. At the time of this writing, the city was studying the feasibility of relocating the Metro bus transit center to be closer to the light rail station as part of the Accessible Mount Baker Plan, a Seattle Department of Transportation effort to improve connectivity in the area and fuel the development of a town center along with walking and biking options. In 2014, the Artspace Mt. Baker Lofts opened next to the Mount Baker station. The development offers affordable housing for area artists and ground-level commercial spaces, several of which are currently used by residents for creative endeavors—another push to enhance a busy stretch that’s occupied predominantly by strip malls. Nightlife is limited in this neighborhood, but head back toward the lake and you’ll find a small pocket of charm between Mount Baker Park and Mount Baker Boulevard. Stop in at cozy all-day café Mioposto for wood-fired pizza, or head next door to The Velvet Elk for craft cocktails and bar snacks.