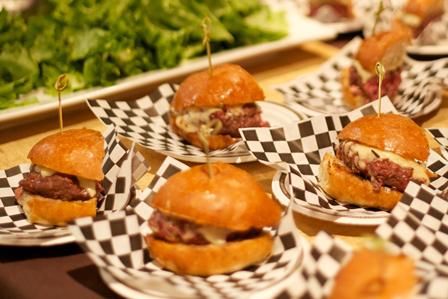 Two things filled the hall at Bell Harbor Conference Center last night: a lively crowd of hungry people and the wildly seductive smell of over a thousand tiny burgers cooking on miniature grills.

My winter coat still bears a hint of this scent, which I now refer to as “happiness.”

Ten talented crews came out last night to Seattle mag’s first-ever Burger Brawl event, for which they served up as many delicious mini burgers as those of us in attendance could eat (which turns out to be a lot). The crews represented some of our favorite Seattle restaurants, most of them covered in the Best Burgers issue. They’re listed here, along with the tasty burger they cooked last night, in case you want to taste any in their natural habitats.

Also in attendance: Bluebird Ice Cream, so popular the server was scraping the bottom of his containers and serving ice cream with forks by the end of the night.

And the folks from Washington State Beef Commission were there promoting their Beef Counts initiative, which helps people in our state who are at risk of going hungry. $5 from every ticket purchased went to support that program. Aside from eating burgers (I managed to scarf down six, plus ice cream, which apparently still counts as sort of wussy in these offices), the best part of the event was watching people spin around and around in circles, eager to point at booths around the room to indicate which burgers they liked and which they had yet to try. We were all giddy with burger love.

At no other event have I confidently strolled through a crowd of people, cramming half a burger into my wide-open mouth, toppings and sauce spilling everywhere, and feeling nary a bit of self-consciousness. The fact that both glasses of wine I had were filled, literally, to the brim (my new favorite bartender, you know who you are) may have helped.

Or, perhaps it was the site of so many people doing exactly the same thing.

By the end of the night, several people were sitting on the floor, reclining against a wall and letting it all hang out while the burger bliss worked itself slowly through their veins. If this isn’t the sign of a successful Burger Brawl, I don’t know what is (that doesn’t involve an ambulance).

Truly, all of the burgers were fantastic—they reminded me how exciting eating a good burger all on its own can be (not once did I crave a French fry). Long after I felt full, enchanting calls of “horseradish aioli,” “Painted Hills beef,” or “topped with a disc of pork belly” inspired me to push forward and try another one.

I appreciate, now, the great pains our food critic Allison Austin Scheff went to when she tasted nearly every burger in the city over the course of a few weeks, so she could authoritatively edit the Burger Issue. Ali, you are truly the Burger Queen.

In spite of the weird burger hangover I’m experiencing today (a bit of nausea paired with subtle, sporadic sensations of choking), I would do it all over again in a slow, congested heartbeat.

I have no unanimous winner to announce for the Burger Brawl, just pounds of great feedback online and around the office this morning. So I offer it here for you, readers, to inspire you to try all of these burgers—on separate occasions, so you can truly appreciate their deliciousness. From the Seattle Mag Team:

Rachel Hart (editor-in-chief): I loved how each and every burger tasted completely different. Even Tom Douglas’ smoky Palace Kitchen burger was totally different than his classic Brave Horse burger, which was my fave along with Spring Hill’s deliciousness and chewy sesame bun. Quinn’s proudly disclaimed that their burgers were slathered with beef AND pork fat. Why not? Next year, Lipitor should be the sponsor! Also, the “bloodbath” was displayed proudly—if people don’t know the “proper” way to cook burgers—medium rare to practically rare—they do now.

Allison Austin Scheff (food editor): The feedback I heard was: Spring Hill #1, Spur/Tavern Law #2, Brave Horse #3. Most people agreed that the best burger there was Spring Hill. Guess it’s worth $19 for the big one at the restaurant! (Also: yuppie burgers rule?!) Overall, what a fun event! The smell! The awesome, awesome smell of the burgers cooking was the thing I remember most. And Rachel’s speech with beer in hand! Wish we had photo evidence of that.

Kristen Russell (managing editor): The event was so dang cool, I weep for vegetarians. Amazing burgers, never a line to get to one. Favorites: Spring Hill, Skillet and Quinn’s. When is Pizza Brawl?

Cody Ellerd Bay: Not to brag, but the mister and I tried every burger in the room, and went back for seconds on two (Spur & Spring Hill). Ok, so I am bragging. Our top 3 were Spring Hill, Spur and Bravehorse—though mister puts Bravehorse Tavern at his #1 spot for its classic purity.

Brangien Davis (self-proclaimed “ham-etarian,” or a vegetarian who eats ham):
My favorite was Spring Hill, but (full disclosure) I only tried 2.5 burgers. For someone who eats beef maybe once every six months, that was .5 too many.

Marianne Hale: I ate a wimpy four burgers and thought I might die.

Shawna Leader: I’m not even a huge fan of beef, but I made it through five sliders and a Bluebird Snickerdoodle ice cream before calling it quits. I’ll be dreaming about that Spring Hill burger for weeks.

Maysha Watson: My favorite burger was definitely the one from Spring Hill, although I think the star ingredient from that was their house-made American cheese. JakeStamp: My cup doth runneth over. With burgers.

WanderinVoyager: Back from #BurgerBrawl stuffed but delighted- @Local360Seattle takes home the prize in my opinion- that sauce, those red peppers- YUM

andwinjones: Quinn’s… your burger was my idea of heaven #burgerme

codybay: @springhill_ws your heavenly beefiness is clearly the best, and yes, I tried them all. #burgerme

Doug A. Kaplan: This event was fantastic, better than Burning Beast or the Lamb Jam. Skillet wins, with Spring Hill coming in second and Tavern in 3rd. Love this event, hope there is more where this came from!

Jamie Michelle Peha: I had a mini-burger from skillet street food Spring Hill Restaurant & Bar Palace Kitchen Brave Horse Tavern and Zippy’s Giant Burgers. Painted Hills seems to be beef of choice. Get out there and try these. You will be very happy. Burgers make people happy, didn’t you know? Awesome job Seattle magazine on 1st (hope annual) Burger Brawl

AJ Mulcahey: Can’t decide who had the better burger- so many awesome burgers to choose from! Plus the [Blue Bird] ice cream was amazing! Great event!

Chrisnishiwaki: I got into a brawl, #BurgerBrawl, & I won. Tried all 10 sliders.