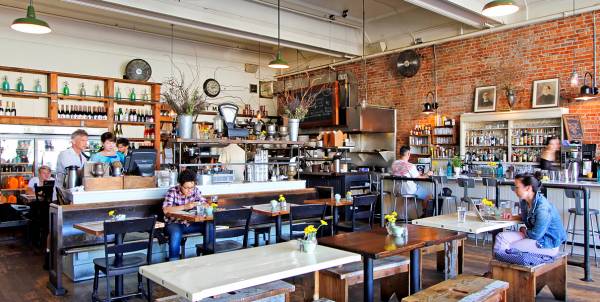 !–paging_filter–pstrongAs the bridge-and-tunnelification of the Pike-Pine corridor /strongsteadilystrong /strongpushes residents of the Hill out of the area, especially on weekend nights, businesses are branching out into other corners of the hill. We watched the wave hit the crest of the hill three years ago, leaving the Melrose Market in its ebb. Then 12th was conquered (Ba Bar, Presse Stumptown, Von Trapp’s)./p
pNow everyone’s got 19th in their sights. strongIn the next few months, two new restaurants will open, one will expand, and a grocery will move in./strong/p
pThe opening we’re most excited about is a href=”http://aneighborhoodcafe.com/” target=”_blank”Tallulah’s, /awhich will anchor the first floor of retail (though strongly food-centric) space at a href=”http://www.19mercer.com/” target=”_blank”19 Mercer/a when it opens in early December.a href=”http://aneighborhoodcafe.com/” target=”_blank” /aLinda Derschang’s latest is named for her (now adult) daughter, Tallulah Anderson, who happens to be the Marketing Coordinator for Derschang’s six ventures (Bait Shop, Oddfellows, Smith, Linda’s, King’s Hardware and, soon, Tallulah’s). Anderson tells me that Tallulah’s will be stronga casual, neighborhood cafe open for dinner nightly and brunch on the weekends. /strongIn comparison to Oddfellows, I’m told we can, “expect a slightly vegetable driven menu, with dishes like baby beets with goats yogurt, house flat breads, and a lamb burger with zucchini, harissa, and house fries.” For now, follow the progress on the buildout ona href=”https://www.facebook.com/TallulahSeattle” target=”_blank” Tallulah’s Facebook/a./p
pJust next door you’ll find a joint project from a href=”http://www.mollymoonicecream.com/” target=”_blank”Molly Moon’s/a and new cookie shop called a href=”https://www.facebook.com/hellorobincookies” target=”_blank”Hello Robin/a. Robin Wehl Martin’s been winning bake-offs (most notably two Best Classic Whoopie Pie contests at Oddfellows Whoopie Pie Bake-off) and, when approached by her friend Molly Neitzel to open a joint shop, she couldn’t resist./p
pThere’s a food-focused general store opening up, too. a href=”https://www.facebook.com/coneandsteiner” target=”_blank”Cone and Steiner Mercantile/a is a joint project with Fuel’s Dani Cone, Josh Henderson (Skillet, Westward) and Jon Milazzo and Lori Pomeranz (owners of Retrofit Home) on board. strongWe’ve been teased with talk of a growler filling station, a flour mill/strong, select housewares and grocery staples./p
pLastly, a href=”http://www.monsoonrestaurants.com/” target=”_blank”Monsoon/a, a beacon on a barren stretch of road when it opened in 1999 and a destination-worthy dinner house since, is in the midst of expansion. There’ll be 30 additional seats in the dining room and room for eight at a new bar when the construction that began yesterday is finished sometime this spring./p