"I feel helpless to do anything, except stay inside. Which is the same as it ever was." 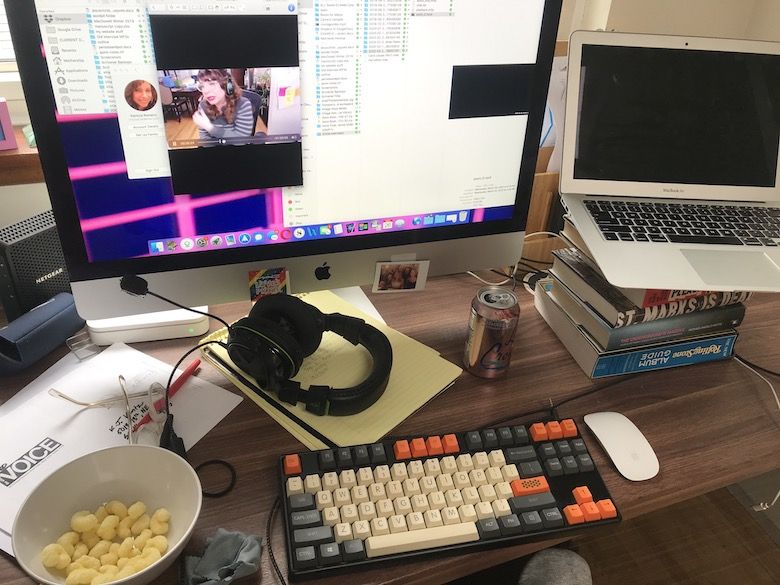 This is part of a series of personal essays we’re calling Stories from Seattle, contributed by our community and designed to show how the coronavirus pandemic is impacting the lives of Seattleites. Want to share your story, coping mechanisms, wildest ideas? We’d love to hear. Please email: chelsea.lin@tigeroak.com.

“Aren’t you freaking out?” asked my friend who was clearly freaking out. He was stuck in traffic in Los Angeles earlier this month and he called to find out how I was doing in Seattle, then the epicenter of Coronavirus in America.

I was not freaking out. I was sanguine.

Because long before Governor Jay Inslee decreed large events be shut down, that schools be closed, that people self-quarantine, I was already isolated from the general public.

I have the wipes, the meds, the cans of soup, the extra set of toilet paper (it’s still unclear why we all went on a run of toilet paper, but I got two packages anyway). I have a freezer packed with frozen foods. But life for me is the same as it ever was. As a freelancer, I’m already self-quarantined. As a struggling freelancer, leaving the house is expensive, even in the best of circumstances. I only do it a few times a week, and even then, my friends are kind enough to help. If the weather is nice, I take walks, but I live in Seattle. So, mostly, I stay inside.

In January, before it had entered America, I would stay up nights looking at the reports leaking from China. Some of them were clearly fake news, but many of them were true and horrific and awful. I watched drones telling little old ladies to stay inside. I saw people being dragged from the streets into vans because they refused to stay inside. I saw people passed out on the street, possibly dead. I was horrified and fascinated, and wondered how bad it really was, how it would be if it ever made it over here. That it was happening so far away made it seem like a science fiction movie.

But now that it’s here, it still feels completely unreal.

I live in Capitol Hill, in Seattle. I have no car. I only travel by foot or public transportation, which is not nearly as crowded as New York’s. Kirkland, where the outbreak happened, is as far away as China to me. I feel terrible about the people who have died, the families who can’t see their loved ones because of the lockdown. I feel helpless to do anything, except stay inside. Which is the same as it ever was.

I go days without seeing anyone but the shadows of my neighbors walking past my apartment. I talk on the phone with people for interviews. I read the shouting online. But I am inside from the time I wake up to the time I go to bed. It is a weird life. I am not sure it’s a healthy one. I have no idea what is going out in the outside world except through what the screen tells me. Social media is hard to quit for this reason. Without the constant yammering of voices, I am not sure what I would do for conversation.

I live alone. I can not go to a concert, I can not go to a museum, I have to self-quarantine, but I have been self-quarantined for three years now. Before we were on lockdown, because I didn’t have any after work plans, and I didn’t have a need to go to the store, and because, in addition to being too lazy, the Coronavirus scare has given me another excuse to not rejoin the gym, and now, I have no need to leave the house at all.

So I binge watched Love is Blind (I would like those hours back, these people are boring and deserve each other), and then, it happened again the next day, because a friend and I both woke up feeling “iffy,” and now feeling “iffy” means you have the plague. So she canceled. I didn’t leave the house.

This stir-crazy feeling isn’t new if you are a freelancer. It is made worse in face of all-city quarantine. I know I am in a privileged position, because I don’t have kids or work in the service industry where I am in contact with the public. I am not a hospital worker, a modern-day saint. I am not elderly and have no underlying health conditions. I’m a writer.

But in the face of the virus, I want more than ever to connect. After 9/11 in New York, we didn’t stop taking subways or gathering in places or living life. We didn’t want the terrorists to win. I don’t want Coronavirus to win. I want to see the concert, go to the movies, watch authors speak. I want to live life. I don’t want to get anyone sick. But I am beginning to understand why those people in China fought the police.

The week that Coronavirus arrived in Seattle, I had gone to a co-working space. I had been researching them before the outbreak because I wanted to be around people. Workers ate their food at the tables in the office which was now filled with tantalizing smells. A dog rolled over on his back and offered up belly rubs. I obliged. Nearby, behind me, a guy was coughing. Suddenly, it felt brazenly dangerous to be there.

I went to the movies on a Saturday night when you could still go to movies on a Saturday night to see Portrait of a Lady on Fire. Few people were at the theater. I had a whole row to myself. I was self-limiting my space. I wiped everything down, I went to the bathroom and scrubbed my hands so clean I exacerbated my eczema. I could have stayed home another night, and watched another movie. But I needed to be around people, even if they were sitting far away from me in the dark.

I understand why the Italians had a hard time containing the virus. My people (I am Italian American) are social creatures. They are also touchy. They give slobbery kisses on the cheek and gregarious full-bodied hugs. Humanity without humans isn’t much of a life.