Why Many Seattleites Now Use a Personal Concierge 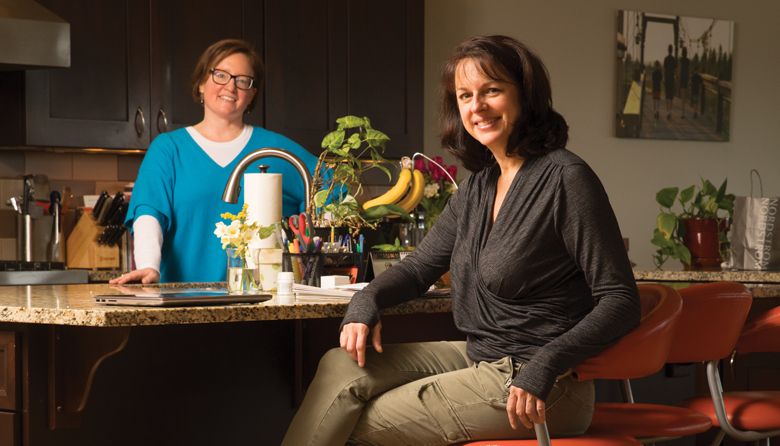 All photos by Hayley Young

Roughly three years ago, Cami Gearhart, a senior executive with an ethical review company, began to realize that women—despite everything they’ve been told—just can’t do it all. Workweeks of 50–60 hours and frequent business travel were standard requirements of her CEO position, and her husband, a physician who occupied a leadership role at his clinic, was equally busy with work. Although the Bellevue couple seemed to be the embodiment of professional success, their home life—specifically the household—was a different matter. “It’s just much better for our mental health to realize that we really needed some help,” Gearhart remembers thinking, describing the snowballing list of home repairs that finally led her to seek out somebody to assist her in managing the rotating crop of helpers—from housecleaners to repair people—needed to make a household run smoothly.

Today, Gearhart considers her personal part-time assistant an integral part of the household, and she’s far from alone. Just as the upper class once enjoyed the luxury of a household staff, a growing number of today’s overscheduled professionals and parents are seeking personal concierges to help them achieve work-life balance—it’s one of the decade’s hottest trends and it’s being embraced in Seattle. “It’s probably a billion-dollar industry right now, and there’s probably a [personal concierge service] in every major city,” says Katharine Giovanni, a 20-year veteran in the national industry who also credits tech companies such as Uber, Lyft, TaskRabbit and online grocery delivery services with helping the business of concierge services to go mainstream. ON BALANCE: A one-time real estate agent, Sondra Firestein founded Pursuit Concierge after finding that new homeowners often had no time to manage their investment

When California native Sondra Firestein arrived in Seattle in 2012, she noticed the gap between Seattle’s outdoorsy vibe and the lack of time that people had to enjoy it. “The people that are moving here are really, really drawn to that lifestyle,” says Firestein, who herself was beckoned by Seattle’s “quality of life thing.” But her early days as a real estate agent and bridal consultant also revealed a city that, despite all its progress, felt conspicuously short on time. “Here were these capable young professionals with relatively simple lives, they didn’t have children and they still were just at the mercy of their to-do lists,” she says, recalling the challenge of finding time for busy young couples to view homes or wedding venues together.

This disparity led Firestein to found Pursuit Concierge, a lifestyle management company conceived in part to help young homebuyers better manage their new investments. “For so many people here in Seattle, what keeps us busy, what keeps us overwhelmed, is stuff that has to get done, but not necessarily by you,” she says.

Today, her small but growing team helps 43 clients around Seattle and in Idaho with a diverse range of tasks: running errands, vetting vendors such as painters, repairers and plumbers; writing company blog posts; booking dinners; even supporting one client as she sought treatment for an eating disorder. Some clients, including divorce and family lawyer Elise Buie, have come to appreciate Pursuit’s distinct mastery of professional and personal tasks; for example, networking and taking care of dry cleaning, which she couldn’t delegate to an ordinary legal assistant. Other clients initially contracted Pursuit to help ease their work lives, only to gradually incorporate their concierge’s services into their personal lives, too.

“There’s this mental block of saying, ‘No, I should be able to figure this out,’” says Raina Henderson, a Ballard-based interior designer who, despite hiring Pursuit Concierge to handle general administrative tasks for her company, initially felt bad about outsourcing errands and other drudgery. About a year in, however, Henderson has found Pursuit so beneficial that she sends the company from 50 to 100 hours’ worth of professional/personal tasks every month, all the while watching her own clients—particularly those working long hours at places like Amazon—start to embrace similar services. “This,” she says, “is kind of the way that they buy their personal time back.”

The crunch time the city is experiencing today began looming in 2012, when stay-at-home mom Kara McKeage, a former administrative assistant, happened to be brainstorming flexible options for part-time work as her son entered kindergarten. “Things were just starting to explode in Seattle,” says McKeage, whose South Lake Union neighborhood offered a front-row seat to Amazon’s dramatic expansion. The sudden growth got her thinking. In the diverse collection of sales support roles McKeage had as an admin assistant, she had discovered a talent for juggling disparate tasks and creating new processes. “I thought surely there are people who need help because they’re busy, they’re working long hours,” she recalls. But even though personal concierge firms were at work in larger cities, McKeage could find only one other person offering such services in Seattle. This dearth led her to found one of Seattle’s first luxury concierge services companies, Pepper’s Personal Assistants. TEAMWORK: Kara McKeage, founder of Pepper’s Personal Assistants, with her staff who work with clients to help them keep their households running smoothly

“People are starting to outsource and seeing that it’s smart to outsource,” says McKeage, whose clients often come to consider her and her team a part of their family. This was the experience of Maygan Wurzer, an overworked View Ridge mom, widow and dance studio owner whose worried employees found and vetted Pepper’s on her behalf. Fifteen months later, Wurzer likens her dependency on her part-time personal assistant—who once even came out to fetch her when her car battery died—to a marriage. “It’s the best money I ever spent,” says Wurzer, describing a service that, although expensive, pays for itself in peace of mind and extra bandwidth to reinvest in work and family.

Despite clients like Wurzer, McKeage says, she still notices that women in particular, who are juggling kids and busy careers, often hesitate to accept outside help. “One thing that we come across a lot is husbands wanting to help by hiring us, and the wife is like, ‘No, I can do it all,’” McKeage says. “Yes, you can,” she agrees, “but you’re always saying ‘no’ to something when you say ‘yes’ to chores.”

Recent years have welcomed a fresh wave of tech start-ups trying to fill the demand for personal concierge services. (There have been previous efforts, such as Seattle’s original errands service, MyLackey.com, which died when the dot-com bubble burst.) Among these new concierge businesses is HeyThrivy, an app-based company founded by two former Microsoft employees in 2017. It offers three tiers of subscriptions for concierge and household management services (see below for details).

“There’s always been the TaskRabbit [a service that allows consumers to find temporary help with everyday tasks] or Craigslist to find somebody one-off,” says HeyThrivy founder Danna Redmond. HeyThrivy’s difference? It offers a dedicated home manager with whom clients can build a relationship, along with home care visits for tasks such as folding and putting away laundry, organizing closets and drawers, sorting mail and other things falling outside typical housecleaning chores.

HeyThrivy—which currently serves Seattle and Mercer Island only, but plans to eventually expand to the Eastside—also offers clients an on-demand stable of vendors, who are basically repair people, plumbers and other fix-it workers whom the company has used and for whom it can vouch. Depending on your monthly subscription tier, HeyThrivy can also schedule appointments and manage those projects on-site, so clients don’t have to take time off from work.