Climate Change: When Rising Tides Do Not Lift All Boats

Will all neighborhoods be protected equally as the city adapts to climate change? 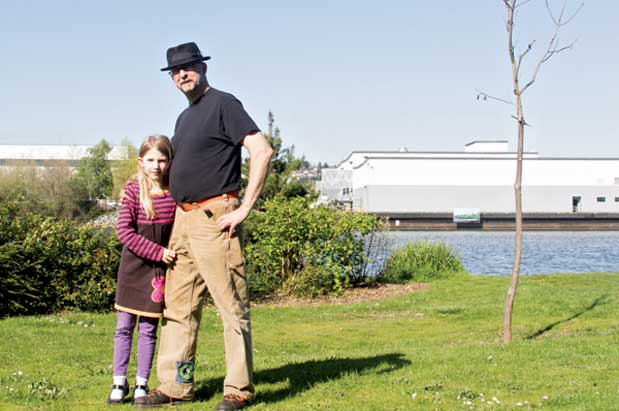 Most of the streets in the South Park neighborhood end at the Duwamish River. Local children and their parents often play and fish on the river’s shoreline, even gathering there for bonfires. Every spring, Concord International School 5th grade teacher Kate Ayers educates her students about the environmental issues that have plagued the waterway: that it’s a Superfund site; that the fish in the river aren’t always safe to eat; that after a trip to the river, kids should wash their feet to remove arsenic and other contaminants.

Next year, Ayers may add to her lesson, since learning that the Duwamish is predicted to rise 6 or more inches by 2050 and much higher than that during storms. The cause is climate change. Without shoreline alterations, the Duwamish will spill through much of the neighborhood. “That’s a really amazingly short amount of time,” Ayers says.

Many people in Seattle are taking steps to shrink their carbon footprints and help slow climate change, by driving less, consuming less and living in more energy-efficient homes. Even if we can stop increases in carbon emissions, however, Seattleites will need to adapt to the effects of climate change.

Case in point? Seattle’s rising water levels. Ayers learned about this in January, as many others did, after Seattle Public Utilities (SPU) released a new map showing what a Seattle shoreline would look like in 2050, both from an everyday perspective, and also during storms and high tides. “We know we have assets that have exposure to sea level rise, and we wanted to get a sense of where they are and what that degree of exposure is,” says Paul Fleming, manager of the climate resiliency group at SPU. The document projects that parts of Georgetown, West Seattle, Harbor Island, Interbay and Golden Gardens will, like South Park, be underwater, and that record high tides will become commonplace in the future.

Sea level in Seattle is expected to bump up an average of 6 inches by 2050. (The Duwamish, an estuary, is also affected by sea level rise.) Conservative estimates range from a low of 3 inches by that date to a high of 22 inches. During rainy, windy high tides, water will rise higher.

“There’s going to be a change and it may be big,” says Jill Simmons, director of Seattle’s Office of Sustainability and Environment, of our shoreline shift. “I think it’s not really on most people’s radar.”

And it’s only part of the picture. A federal climate change report earlier this year showed an altered Northwest in coming decades. According to the Third National Climate Assessment, prepared by 13 federal agencies, the shrinking seasonal snowmelt will reduce the supply of fresh water to our region. That decreased water will affect farming and ranching; fish, such as salmon and bull trout; and our ability to produce hydropower to keep our lights burning and computers humming. Ocean acidification will alter seafood availability. And we’ll likely need to rewrite our hiking books and our state moniker: The assessment says increasing wildfires, insect outbreaks and diseases, often caused by low water supply, mean many Northwest forests will die.

To try to prepare for some of these changes, Seattle this year created a draft climate action plan that describes dozens of possible future impacts on city dwellers, from city watershed changes that could harm fish, to heat stress and respiratory diseases that could afflict people as the climate warms. Suggestions for ways the city can adapt include restoring urban forests, improving emergency planning and further conserving energy.

“[The Puget Sound region] has been looked at as one of the leading cities in the country in terms of adapting to climate change,” says Lara Whitely Binder, outreach specialist for the University of Washington Climate Impacts Group. As examples, she points to SPU’s efforts in studying sea level rise and Seattle City Light’s research on how reduced streamflow and water temperature will affect hydroelectric power and fish.

Our issues regarding rising sea levels are shared by many of the world’s shoreline cities, and Simmons says we will probably make use of similar solutions, which are usually grouped under the acronym PAR: “protect, accommodate or retreat.” In New York City, for example, officials are studying the possibility of creating tidal barriers to ward off some of the damage caused by megastorms like last year’s Hurricane Sandy, and are also considering buying up oceanfront property and allowing it to become sand dunes.

“I think it’s going to be all of the above” for Seattle, says Simmons. For example, a shoreline park could be designed in such a way that it can flood occasionally without creating problems, while the Port of Seattle, in the bull’s-eye of sea level rise on low-lying Harbor Island, likely will need protection.

The city has already taken some steps. For instance, the design for the new seawall takes future sea level rise into account, as does all of SPU’s new drainage infrastructure. Further, Seattle plans to have an adaptation strategy in place by the end of next year. Simmons says that strategy will be revisited continually as the science improves. “I think we have some time,” she says. “Doing it well and in a thoughtful manner, and being strategic and prepared is critical.”

But we shouldn’t wait too long. “People will say about some of these impacts: ‘It doesn’t look bad until the 2050s!’” says Whitely Binder. “There’s a tendency to think that we’ve got decades until we have to deal with the problem, when the reality is that some of the solutions will take decades to implement. It would be like someone trying to lose a whole bunch of weight after a heart attack. With time, we have the ability to work in adaptation measures that are less disruptive than the typical response that might happen after a crisis.”

For some Seattle residents, the time to begin is now. Last December, parts of Seattle sloshed through the highest tide ever recorded in our city—a high mark that is projected to be commonplace by 2050. One neighborhood that took a soaking was Alki, in West Seattle, where the water crept like a Navy SEAL team up the beach in the night and flooded about 100 properties. “It was the highest I’d ever seen it,” said Deone Benninghoven, an Alki resident for more than 20 years. The sand and the promenade around the Bathhouse were underwater for much of the day. As she watched kids glide over the soggy beach on skimboards, Benninghoven worried about how many years she had left before her nearby house is inundated during a high-tide storm. She says she doesn’t think neighbors give Alki’s rising tides and increased flooding enough thought. “I don’t see the worry, except for from the old-timers who have seen the change. For others, it’s more like blissful denial.”

Benninghoven plans to work on her emergency preparedness for next winter—stockpiling sandbags and devising an evacuation plan in case the water rises during the night. She’s also considering moving away from the shoreline.

That kind of climate change planning gets more complicated in areas such as South Park, which has a median household income well below Seattle’s average. “Climate change impacts can be disproportional on low-income communities,” says Whitely Binder. For example, she says, residents might have less financial ability to move out of harm’s way, or money to recover if a disaster happens. They may not have insurance coverage to allow quick recovery. Health issues can grow worse with rising temperatures. Language barriers may make it harder to communicate information about hazards.

Architect Sage Saskill bought his one-level house in South Park in 2005. “I’m two blocks from the Duwamish,” he says. “When the sea level rises, it’s going to rise right here.” Saskill says it’s not always simple to move from a neighborhood you love, even when there’s the potential for water to come lapping at your doorstep. “One thing, it’s not a great time to sell your house if you live in this neighborhood. Two, where are you going to go?”

Schoolteacher Ayers hopes neighborhoods like South Park don’t get left behind in the planning. “Certain neighborhoods are going to take action and do whatever they are going to do to make changes to protect themselves,” she says. “South Park doesn’t have the political clout or the money. But this community matters just as much.”