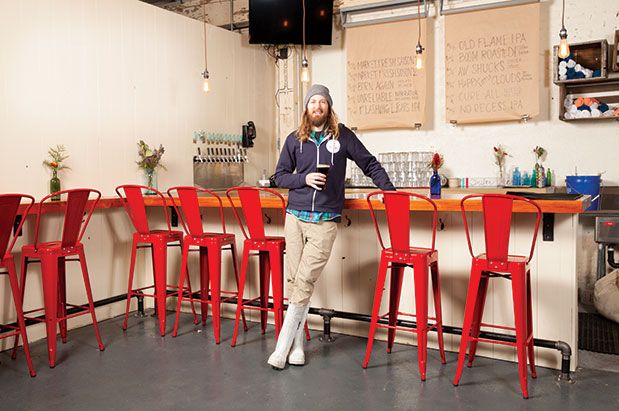 When the story broke in January 2015 that Anheuser-Busch had acquired the Elysian Brewing Company, one of Seattle’s oldest and best-loved craft breweries, beer lovers reacted like it was a death in the family. The sense of shock was even more pronounced among Elysian Brewing’s employees, who were unaware that getting gobbled up by the beer behemoth, often viewed as the arch enemy of small and independent breweries, was even a possibility.

By the time the acquisition was announced, Steve Luke, then the brewer at Elysian Brewing Company’s Elysian Fields brewpub near CenturyLink Field, was far beyond daydreaming about opening his own brewery. His decision to open Cloudburst Brewing (Downtown, 2116 Western Ave.; 206.602.6061; cloudburstbrew.com) in Seattle was not an act of rebellion against his new corporate overlords; he had been planning his departure for months.

Luke opened Cloudburst Brewing this past December, just one block north of Pike Place Market in the former home of Elliott Bay Bicycles on Western Avenue. The 7,200 square-foot space is primarily dedicated to the brewery, but the small, beer-only, 21+ taproom instantly became a popular destination for neighborhood regulars and beer lovers from across the city.

Leading up to the opening, local beer fans were dizzy with anticipation, recognizing that Luke was the creative mastermind behind some of Elysian Brewing’s best-loved beers such as Space Dust IPA and Dayglow IPA, as well as more imaginative beers like Split Shot Espresso Stout and Punkacinno Coffee-Pumpkin Ale.

According to Luke, whimsy and imagination are themes at Cloudburst Brewing. “As a brewer, I didn’t want to open a brewery just so I could make the same beer over and over again. There is always something to admire about consistency—it takes skill and attention to detail—but I also like to experiment, to be creative.”

After all, Luke is the brewer who created Elysian Brewing’s Gourdgia on my Mind, a one-of-a-kind pumpkin-peach ale that gained notoriety when Budweiser seemingly mocked it, though not by name, in a television commercial using pumpkin-peach ale as an example of an overly fussy beer.

One of Cloudburst’s regular offerings is Market Fresh Saison, a beer with a dynamic recipe that takes advantage of the brewery’s location near the market—and its seasonal ingredients.

“It’s so cool being this close to Pike Place Market,” says Luke. “I’m excited to experiment with whatever I can find there—what’s just coming fresh, what’s about to go out of season, and everything else. Saison is a style of beer that lends itself particularly well to this kind of playfulness.”

For now, Cloudburst Brewing’s beers are only available on tap—no bottles or cans. Look for it at local bars that focus on good beer, like The Pine Box in Capitol Hill (pineboxbar.com), Beveridge Place Pub in West Seattle (beveridgeplacepub.com), or Brouwer’s Café in Fremont (brouwerscafe.blogspot.com).

The best place to drink it or fill a growler is at the brewery’s taproom. (Downtown, 2116 Western Ave.) Note: Market Fresh and Happy Little Clouds will be a regular part of the lineup. They’ll always offer a coffee beer, though it may not be the same every time.

KENDALL’S FAVORITE CLOUDBURST BEERS
Happy Little Clouds, Dry-Hopped Pilsner
Crisp and refreshing like a Pilsner, but hoppy like an IPA, it packs a bracing wallop of resinous, floral character. The name is an homage to the late, great Bob Ross, the beloved PBS art instructor known for painting happy little clouds. 5.2 percent alcohol by volume.

» Market Fresh Saison
Slightly sweet and fruity, it finishes dry and just a bit tart, but what sets this saison apart from others is the use of market-fresh ingredients: herbs, fruits and spices. The base beer is the same, but the added flavors change each time they brew a batch, depending on what looks good at the market that day. The first batch was flavored with fresh cranberries and sage because that’s what piqued Luke’s interest when he visited the market one day. For the second batch he used grapefruit and rosemary. Who knows what’s next? 5.1 percent alcohol by volume.

» Born Again Spiced Blonde Ale
This sassy blonde is seasoned with coriander, peppercorns, and grains of paradise. Bright golden and slightly hazy, you’ll recognize the coriander, but the other spices are more subtle, and it’s all balanced with a slightly sweet, fruity flavor. 5.8 percent alcohol by volume.

» Boom. Roasted! Imperial Coffee Porter
They cold-brew freshly roasted beans from Seattle’s Herkimer Coffee and use the resulting joe to create a beer that is robust but dry, with an assertive coffee flavor that is smooth and vaguely sweet. Surprisingly, it is not bitter. 7.0 percent alcohol by volume.