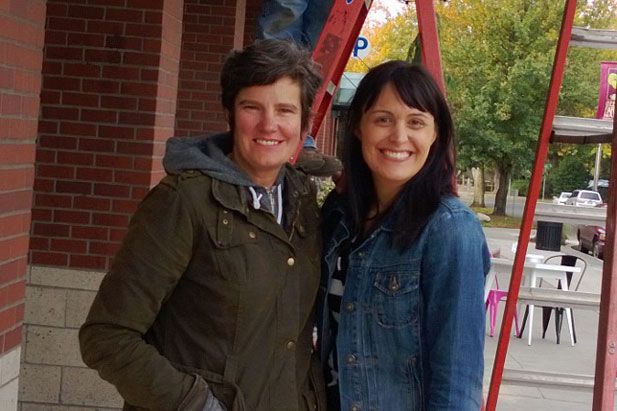 Cupcake Royale founder/owner Jody Hall and her head pastry chef/chief operations officer Nicki Kerbs have been busy. Adding ice cream to the now 12-year-old cupcake chain in 2012 and expanding Cupcake Royale to six branches in 2013 was all well and good, but Hall and Kerbs, it seems, were just getting started.

This spring, the duo introduces a range of new endeavors: a donut pop-up in the Ballard Cupcake Royale starting this Saturday, March 28; 10 new flavors of ice cream developed with prominent local chefs beginning May 11 (in all branches) and a new non-Cupcake Royale-related business called The Goodship Company, marketing cannabis sweets in 18 approved venues around Seattle so far, as of last week. We caught up with the treat team for details on all, and any idea of what might be next. This Saturday, March 28, Rodeo Donut will ride into the Ballard Cupcake Royale at 7 a.m. to serve up six flavors of small-batch brioche donuts ($2.50 to $3 each) for as long as they last. Hall plans to offer the pop-up at the Ballard shop through the end of June, rotating six flavors daily among the 14 they have developed so far: orange lemon honeysuckle, salted caramel crème brulee and preserved lemon, to name a few.

What’s different about these donuts? A few things, according to Kerbs, who developed the recipes with a team of other Cupcake Royale bakers. Made from brioche dough, which includes eggs, egg yolks and butter instead of shortening, like most donut doughs, Rodeo donuts are lighter and fluffier than what we’re used to—as well as richer (thank you, butter).

Furthermore, the particular brioche base that Kerbs and co. have developed packs flavor, featuring orange flower water, vanilla beans, orange zest and honey in place of half of its sugar.

Finally, Kerbs says that Rodeo Donuts are distinct in that all of the glazes and fillings are also housemade (“nothing from a bucket”), and they’ll will be prepared in small batches and served fresh from the fryer.

“Our goal is quality over quanity,” Kerbs says. “We want the donut to be an experience, almost like a plated dessert: you get your sauce, your crunchy topping…” and so on. She notes that New York and Chicago have offered inspiration with their brioche donuts, as well as Crosstown Doughnuts in London.

Set to rise early Saturday? A bonus for those at that door of the Ballard Cupcake Royale at the Rodeo grand opening at 7: a free 12-ounce Stumptown coffee will be paired with each donut purchase while supplies last. How it works: Kerbs asked each chef for his or her favorite ice cream flavor or one they’d like to create. Erickson, for example, chose rocky road, and suggested touches she thought would make it shine: vanilla, salted Spanish peanuts or Marcona almonds and more. Then Kerbs and her team developed a version of the flavor and sent it to Erickson to sample and offer input. After several rounds of tasting and Erickson’s ultimate sign off, Renee’s Rocky Road is a smoky, salty variety, composed of sea salted Theo chocolate ice cream, Marcona almond bark and marshmallow ribbon.

Other flavors so far include Ethan’s Honey Ricotta with Pistachio Brittle (local honey ricotta ice cream with pistachio brittle folded in) and John’s Brown Butter Salted Pecan (lightly salted brown butter ice cream with roasted pecans). Once all the flavors are complete, Kerbs and Hall plan to offer three flavors at a time and are considering taste-offs and more come summer, so stay tuned. Outside of Cupcake Royale, Hall and Kerbs have been working on yet another product: a refined marijuana cookie as a part of Hall’s new business, The Goodship Company. In two flavors so far (sea salt chocolate chip and Saigon cinnamon snickerdoodle), each cookie has 10 mg of marijuana’s psychoactive chemical THC extract, a serving size according to the state. The confections are available at 18 local retailers approved to sell recreational marijuana so far, including Uncle Ike’s (23rd and Union), Dockside Cannibis (150th and Aurora), Cannibis City (2733 4th Ave S.), Ganja Goddess (3207 1st Avenue S) and Rain City Cannibis  (11537 Rainier Ave S).

“I like the idea that we can help normalize marijuana,” Hall says, who teamed with Kerbs as well as various food scientists for a year to develop what she considers a sophisticated treat that “tastes delicious and is made really well.”

“I love the notion that people would bring a six-pack of our cookies to a dinner party like we might bring a nice bottle of wine. It’s a really fun way to imbibe,” she says. “I think they help people disconnect from all the clutter in their brains, and help us be more present. They help us notice the beauty around us more; they help us connect with what were doing and the people we’re with. I think that’s stuff we’re all starved for.”

Hall recommends that people start with a quarter or a half cookie to “figure out your cruising altitude” and not overdo it. The confections come in childproof packages that must be cut open and don’t let in air or light, with leaf-free labeling designed to appeal to the adult set.

“The package is meant to be something you’d want to learn more about and trust,” she says.

Want a taste? Hall will be on hand with uninfused samples at Dockside Cannabis this Thursday, March 26 from 5 to 7 p.m. to promote the cookies and discuss her baking experience. At present, single servings of both the chocolate chip and the snickerdoodle are available ($11-13 each, with a 60-day shelf life). In a month, cookie six-packs will go on the market, and in May Goodship will release chocolate bars.