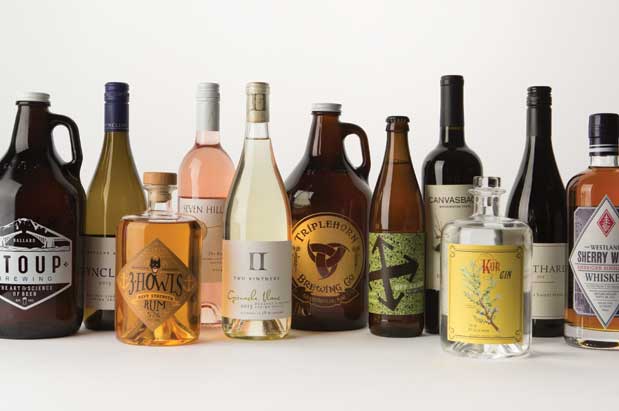 all bottles shot by chustine minoda and sarah pitts robinson Wildwood Spirits Co. Kur Gin, 750-ml bottle ($29)
Washington state’s selection of good gins continues to expand, and the finest recent addition is Kur, developed by master sommelier candidate and distiller Erik Liedholm. Recent winner of the New York World Wine & Spirits Competition’s Best in Show award (and a gin double gold), the Bothell-distilled spirit is made with heirloom-variety red winter wheat and botanicals such as coriander seed, Seville orange, Douglas fir and Braeburn apples from Liedholm’s yard and other local sources. With a classic London dry flavor, enhanced by citrus and a forest echo, it makes a wonderful G&T and is a hit in classic cocktails. Pair with pasta burro e salvia (pasta with butter and sage) and fish dishes. wildwoodspiritsco.com

“Hot” Red Wines
After back-to-back cool-weather vintages in 2010 and 2011, the following three summers in Washington wine country were hot (2012), hotter (2013) and hottest (2014). The majority of the red wines released this year will come from 2012 or 2013, so we can expect bottles with plenty of plush, silky fruit. The extra yum factor will be welcome after the harder-edged wines from cooler years.