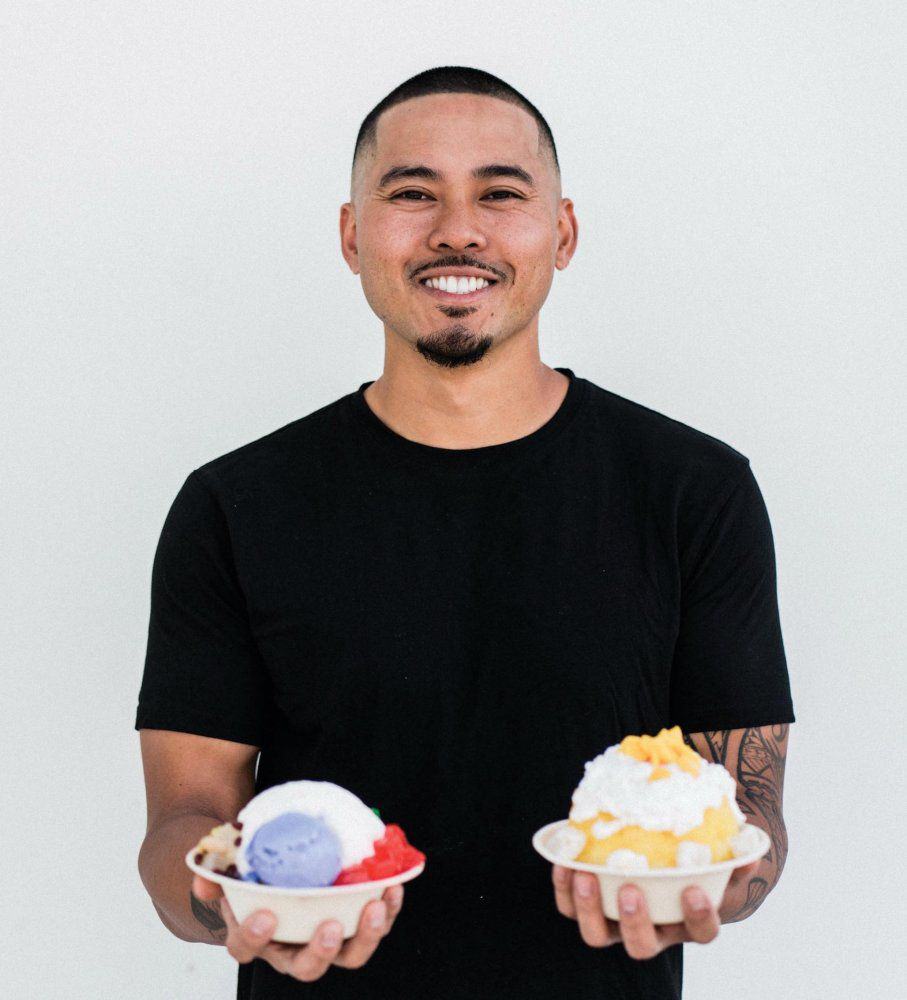 Shave ice — literally and ﬁguratively one of the coolest inventions of all time — seems simple in concept, but certainly didn’t start out that way.

The origin of shave ice can be traced back to Japan’s Heian period from 794 to 1185. Known as kakigori, it was available only to the elite since ice had to be sourced from the mountains and stored in ice houses or caves. In the summer, the ice would be shaved by hand with a knife, and topped with sweet sap from ﬂowers and vines.

In the Meiji period, around the 19th century, kakigori became accessible to the general public, which is how Japanese immigrants who worked on sugar plantations and pineapple ﬁelds in Hawaii ﬁrst introduced it to the United States in the mid-1800s. Back then, they used swords to shave blocks of ice and ﬂavor it with local fruit juices, which is how it became known as shave ice.

Eventually, shave ice was sold in convenience stores and grocery stores throughout Hawaii, which is where Renton-born and raised Michael Del Mundo ﬁrst experienced the treat as a kid.

“My dad moved to Hawaii when I was 10 to open a 76 gas station in Waianae,” Del Mundo remembers. “I’d spend my vacations helping out at his shop. My brother and I would get shave ice on the way to the beach in North Shore or on the way home from getting groceries for the shop.”

Del Mundo moved to Hawaii in 2010 to be with his dad, and in 2011, when his dad purchased a general store a block behind the gas station, the shave ice seed was planted.

“There weren’t many shave ice options on the west side of Oahu,” he recalls. “We had to go 45 minutes away, so I thought it might be cool to start selling shave ice. We opened the shop as Dan’s Maili Shave Ice & Snacks, and families would come together. It was a great feeling.”

Del Mundo, who taught himself to make shave ice from YouTube videos and lots of trial and error, just couldn’t shake the feeling that there was more to be done to spread the shave ice gospel beyond Hawaii. In 2015, he moved back to Seattle, and was working retail while trying to ﬁgure out what to do with his life.

“In the back of my head, I always knew I wanted to own my own business because my parents owned their own business,” he says. “I thought it would be cool to do shave ice in Seattle and ended up doing an event at the Chinatown Night Market in 2017, and it was really fun. We got a super positive response from everyone.”

Convinced there was enough demand, Del Mundo quit his job and went all in with Mike’s Shave Ice. He started doing pop-ups with local businesses, the Kirkland Farmers Market, and various night markets and festivals.

He got his shave ice trailer in the summer of 2019, and now shows up in the spring and summer in the parking lots of local businesses, including BIPOC-owned businesses with Hawaiian origins, such as Sam Choy’s, Cakes of Paradise, Café Kai and Ono Poke.

“My parents are from the Philippines and I’m a ﬁrst-generation born Filipino-American,” Del Mundo says. “Even though I wasn’t born and raised in Hawaii, it’s important to me that I do justice to the culture, as there are so many diﬀerent types of shave ice, and each culture makes it their own.”

Though Del Mundo uses traditional syrup concentrates from a distributor in Hawaii, he makes his own specialty syrups with organic cane sugar and local strawberries. He hopes to start adding more local berries and rhubarb, and is already using ice cream from Laina’s in Rainier Valley.

As a tribute to the popular Filipino treat Halo-Halo, he has experimented with it in shave ice form, using ube —purple yam — ice cream and toppings such as sweet red beans, coconut jellies and toasted rice known as pinipig.

In his commercial kitchen in Georgetown, he and his team hand roll and cut hundreds of tiny pieces of mochi used for the specialty creations like the Strawberry lilikoi — passion fruit — which has a house-made strawberry syrup, passion fruit juice, haupia — Hawaiian coconut milk pudding — vanilla ice cream and is topped with fresh strawberries and mochi. Other ﬂavors like Thai tea, mango and sago — coconut pearls — and strawberry and lychee mint are also top notch.

“I wanted to share shave ice with people in Seattle who haven’t had it, and people from Hawaii who want that feeling of being back home, and that’s just what I’m doing,” Del Mundo says. “It’s such an awesome feeling.”

Dining In, Dining Outdoors in Ballard

In a past reality that seems almost like a dream, Seattle’s outdoor dining existed only in the summer months, when we were all just happy to be in actual sunshine, even if it disappeared as quickly as the tables and umbrellas. Then, during the early days of the pandemic, dining stopped. Everything stopped. From a…

First Paris Baguette in Washington set to open in 2023

The quick-service restaurant is coming the the Pacific Northwest

Washington state’s first Paris Baguette quick-service restaurant is set to open in early 2023, courtesy of a local businessman and restaurateur hoping to recapture some of his past. Paul Liu, who immigrated to the Seattle area with his family from South Korea when he was 10, developed a fondness for the internationally recognized neighborhood bakery-café…