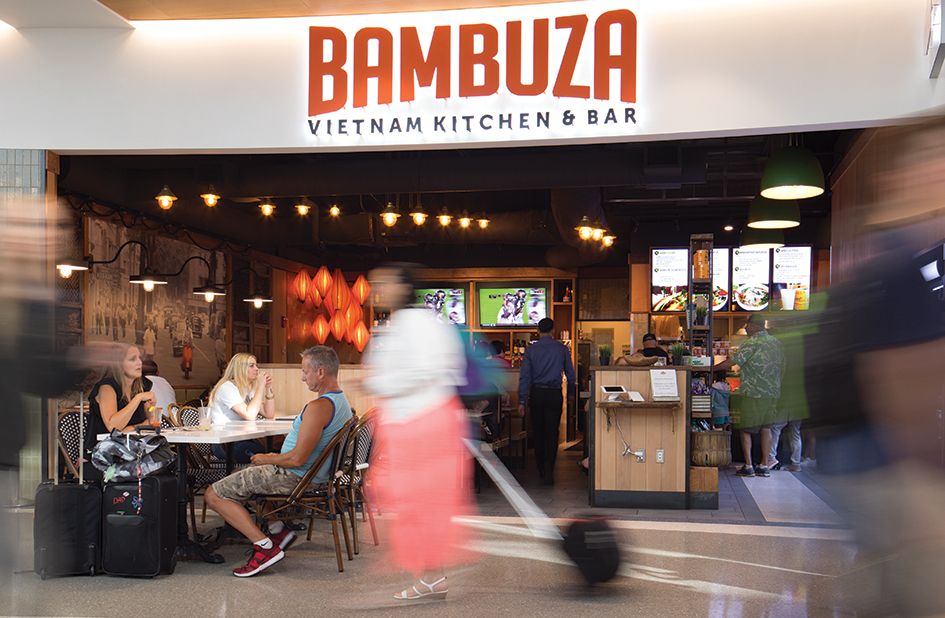 Smaller seats. Longer waits. Fewer freebies. Passenger flight is no longer the uplifting experience it was during aviation’s halcyon days in the 1960s. Airports, however, have never been better. While our own Seattle-Tacoma International Airport may not have the world’s largest indoor waterfall or its own butterfly garden (you’ll find these amid the splendors of Singapore’s Changi airport), it’s undergoing a massive redesign to better serve the approximately 50 million travelers that pass through it each year. And a large part of that renovation means providing better food options.

Dawn Hunter, the Port of Seattle’s senior manager of airport dining and retail, jokes that the new motto of the airport is “Come early, come hungry.” That directive isn’t misplaced: In 2019 alone, the airport has opened nearly 20 new dining and retail options. Another dozen or so will be added by 2021, when renovations are set for completion. Many of these new locations are outposts of established local businesses, with a greater emphasis on female- and minority-owned companies than ever before: The port says 68% of airport businesses will be run in some part by women and/or minorities by 2021, thanks to a federal program called Airport Concessions Disadvantaged Business Enterprises, which aims to “level the playing field for socially and economically disadvantaged firms competing for airport dining and retail business.”

That’s not to say travelers passing through won’t be able to grab a Big Mac or venti drip coffee. Chain options like McDonald’s and Starbucks are important, says Hunter, for balancing a scale of price points that could easily tip higher with upcoming local additions like Salty’s (in the central terminal) and Lou Lou Market & Bar from Loulay chef Thierry Rautureau (at B gates).

But Hunter says it’s crucial that overall, the airport reflect a quintessential Pacific Northwest experience—fueling travelers’ enthusiasm, providing locals with the comforts of home and acting as an extension of a joyful trip rather than the conclusion of it. “At the end of [your stay in Seattle], we want someone to be able to say, ‘I spent the weekend at Bainbridge Island and I went downtown to Pike Place Market, and now I’m at the airport and I’m having that same amazing experience here,’” she says. “Ultimately, this is all for [the guests], to make sure they have the best experience they can have.”

Read on for where to procure that next preflight snack. ROLL WITH IT: Vietnamese restaurant Bambuza is one of the eateries housed in the expanded north satellite terminal; fresh spring rolls and banh mi are popular orders there

Travelers will notice the biggest changes here in the main terminal, where months of barricades have finally given way to reveal new dining options, such as Evergreens, pan-Asian fast-food chain Pei Wei and Kathy Casey’s Lucky Louie Fish Shack. Lucky Louie has replaced Ivar’s, offering another option for fried fish and travel-friendly to-go staples, which some may recognize from Casey’s Dish D’Lish restaurant at Sea-Tac’s C gates.
Don’t miss: True to Seattle’s standing as a destination for live music, the Experience the City of Music Program began bringing live performances by local musicians to the airport in 2012. When the new amphitheater-style stage and seating area opens next summer, it will give passersby a place to relax and enjoy the show.
What’s next: Much of Salty’s reputation rests on its scenic views, and staying true to form, its new main-terminal restaurant will look onto the Seattle skyline when it opens next summer.
Did you know? Lucky Louie Fish Shack—on a primo piece of real estate and with a menu of quitessential Seattle seafood—sells more than 300 pounds of wild, sustainable fish every day.

Workers are completing the new multilevel, 450,000-square-foot International Arrivals Facility, which is scheduled to open next fall. Located east of Concourse A, its purpose is to improve connection times and generally better serve the millions of international travelers who pass through Sea-Tac each year.
Don’t miss: Floret, from the owners of Madison Park’s beloved plant-based restaurant Café Flora, offers a truly Instagram-worthy eat-in dining room and a menu of sweet and savory vegetarian items.
What’s next: Capitol Hill Food Hall, debuting in 2020, will feature a roster of local (though not specifically Capitol Hill–related) businesses, including Macrina Bakery and Slate Coffee Roasters.
Did you know? The Washington’s Lottery locations within Sea-Tac are among the highest performing in the state when it comes to ticket sales. Jessica Wang skillfully blurs the lines between sweet and savory

First, it was a cupcake empire and cannabis edibles. Now, Jody Hall is focused on liquid mushrooms.