Everyone's favorite place for deep dish has a new location, with an impressive list of beverage options 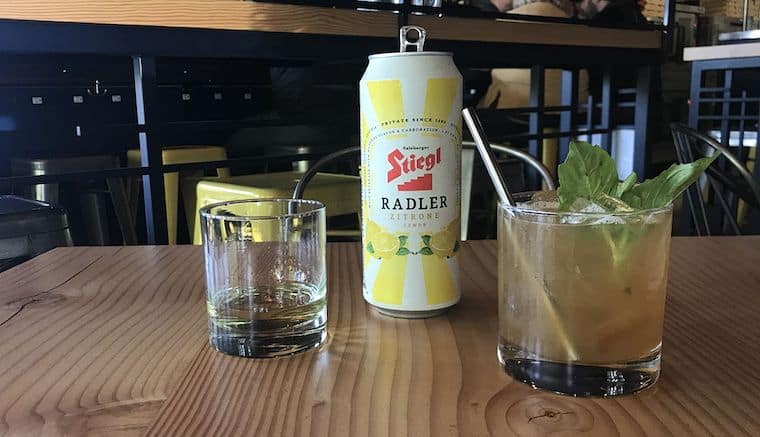 Recently moving from a corner of the Batch 206 distillery Batch Bar into a permanent space on Phinney Ridge (5918 Phinney Ave N), Windy City Pie has already garnered kudos for its Chicago-influenced deep-dish pizzas. And with good reason, as it’s delicious and can generate a full treatise on the various forms of “Chicago-style” pizza and where Windy City fits therein – which is an awesome conversation to have if you love pizza! However, not quite as much has been made, yet, of the drinks, some of which also deliver a little Chicago to Seattle.

This delivery comes via Jeppson’s Malört (sometimes referred to as just Malört), a digestif which starts with a light herbal opening salvo followed by citrus hints and then a mighty wormwood and gentian buzz and burn. For some, that might not sound appealing, but for those, like me, in love with invasion of drinks in this realm (heralded by Italian amari), this is enticing stuff. The back of the Malört bottle says, “It’s [sic] bitter taste is savored by two-fisted drinkers.” But in our modern drinking world, many are more comfortable with bitter beverages.

Introduced in the 1930s and produced by the Jeppson Company, until sold to the C.H. Distillery in 2018, Malört is based on “Bäsk” or “Besk” (old and modern spellings respectively), a Swedish treat flavored with wormwood and spices – Malört means wormwood in Swedish. Before a January distributor change, you had to travel to Chicago to experience it, or come from Illinois like incredibly amiable Windy City owner Dave Lichterman. When opening the full restaurant, he wanted a “bottle list that was digestif-oriented. Malört is that.” They have it on draft, and he and the Windy City bartenders utilize it in cocktails like the Devil In the White City, mixed with gin, Kina Lillet and Brennivín, a caraway-flavored Icelandic strong spirit – an aquavit, really. Lichterman says the drink’s like a “white Negroni.”

Malört’s on their fun list of Boilermakers, too, in the Chicago Handshake: Olympia beer with a Malört shot. However, on Lichterman’s suggestion, I tried the Aaron Burr, instead, which pairs one of spring and summer’s finest refreshing tangy treats – Stiegl Zitrone lemon Radler; the grapefruit version is also swell – and a shot of Letherbee Bësk. Also made in Chicago, with a Swedish-influence, this Malört cousin carries a higher ABV, grapefruit citrus notes and a lighter backend burn. Want even more fun? Get a shot of Malört and the Aaron Burr, and taste test sips of both it and the Bësk after sips of the Radler. It’s a yummy way of taste testing.

The inventive cocktails at Windy City aren’t married to Malört. Another standout was the La Chapita, an ideal-for-our-current-sunny-days combo of mezcal, lime, Amaro Sfumato Rabarbaro (another mysterious bitter drink, this time Italian and made with alpine herbs, Chinese rhubarb root and smoke), and fiery locally made habanero-based Scrappy’s Firewater Tincture. And the drinks don’t stop with bitter-y drams; there are nice lists of beer in draft, bottle and can, and a wine list highlighted by another Lichterman favorite: lightly effervescent, fruity and flowery Lambrusco.

On my last visit, my wife and I split a Brussels Snout pizza, with white sauce, mozz, caramelized onion, and Brussels sprouts, skipping the candied bacon but adding zingy sweet hot peppers. While the Malört and cocktails proved perfect before digging into our pizza (getting the appetite primed – and you need a big appetite for these pizzas), the Lambrusco accompanied it divinely. If you haven’t had a Windy City pizza yet, they’re deep dish (deeper than many that go by that moniker), with a chewy, bottom crust that carries the smallest stich of sweetness and an outer Maillard-browned (caramelized, but science- phrasing is fun) cheese crust edge. The pizza is so unique that servers – all the servers here are particularly helpful, including Lichterman, who is everywhere, describing pizza, helping out, checking in – provide instructions on how to cut it when it comes to your table.

As Lichterman says, it’s not a clone of a particular Chicago pizza, but delivers an essence of the city, a distinctive regionalism, as does the Malört, and the many Chicago World’s Fair posters on the deep blue walls, including original 1893 posters in one restroom. The whole spot, with big booths on one side, wooden-tables, and bar area seating, has a very cozy feel, even with a high ceiling and bustle. Perhaps it’s the plants, or that friendly staff, or the filling and tasty pizza – maybe the Malört? Either way, Windy City is taking off, so I suggest getting their early to beat the rush.