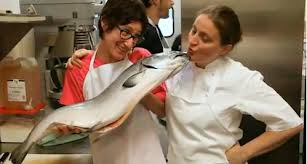 At any food festival, there’s the big, daytime tasting event. Usually wineries and restaurants, serving up little sips and bites, very similar to our own Taste Washington.

At Feast Portland, the Bon Appetit-sponsored festival in Portland last weekend, this tasting event was called the Oregon Bounty Grand Tasting. And it was a fun event: While Incanto’s Chris Cosentino did a taco demonstration with Bon Appetit editor Adam Rapoport on the mic (there were a dozen such demos and talks during both days the Grand Tasting was held), I, along with hundreds of festival-goers, tasted my way through dozens of Willamette Valley pinot noirs, ate the occasionally inspired bite (the best of which was Paulee chef Daniel Mondock’s squid ink cracker with uni cream and a huge, gorgeous hunk of Dungeness crab (pictured here) and, most fun for me, sipped many new-to-me microbrews.

But what stands out now, looking back at my two days at the festival (which is in its first year, but had none of the stumbles, hickups and mixups usually associated with new festivals), are the sensational chefs that the festival brought to Portland for collaborative dinners.

Oh, believe me, I tried hard to snag a seat at the Matthew Lightner (Atera, NYC) and Sean Brock (Husk, Charleston, SC) dinner held Saturday night, but that one sold out before I’d even had a chance to view the weekend’s lineup. Among the talent from out of town: Anita Lo (of New York’s Annisa), Marco Canora (NY’s Hearth), Seamus Mullen (Tertulia, NYC), Paul Qui (Uchiko, Austin, TX). And that’s not counting the superstar Portland chefs: Andy Ricker (Pok Pok), the guys from Olympic Provisions, Cathy Whims (Nostrana) and so many more. What I wish I’d seen: a decent Seattle chef contingent. Only Ethan Stowell and Molly Moon Neitzel showed up, even though other Seattle chefs were invited.

Thankfully, I still managed to get a spot at the April Bloomfied (Spotted Pig, The Breslin, John Dory, NYC), Hedy Goldsmith (Michael’s Genuine Food & Drink, Miami) and Jenn Louis (Lincoln, PDX) dinner held at Louis’s Lincoln Restaurant. And who did I see as I was walking in to take my seat? A stout fellow in a hard-to-miss black and white striped suit: Mr. nose-to-tail himself, Fergus Henderson, of the great St. John restaurant (and of just being a world-renowned badass). Someone hold my purse while I faint.

It was a lovely dinner with lamb as the featured protein. We started with lamb carpaccio with slivers of jalapenos and green coriander berries (look at your own cilantro and you’ll likely see they’ve gone to seed–same thing). Then came lamb sausage, an assortment of heirloom tomatoes, hot little corn fritters everyone ooh’d and aaah’d over. Finally, a braised lamb in a tomato sauce scented with Moroccan spices over rustic dumplings. And then Hedy’s desserts, which included a fine peach tart with feta cheese (and it worked!) and the ringer, for me: black licorice ice cream. A very fine dinner, well paced and paired with local Pinot in the glass, of course.

For Feast Portland to pull off near-impeccable dinners like this one, not to mention bringing in chefs of this caliber, in its first year? Color me impressed. And excited for next year.  How will they top a lamby dinner cooked by a passionate team of lady chefs, eaten in the warmth of dear Portland, with Fergus (FERGUS!) just steps away? I cannot wait to see.