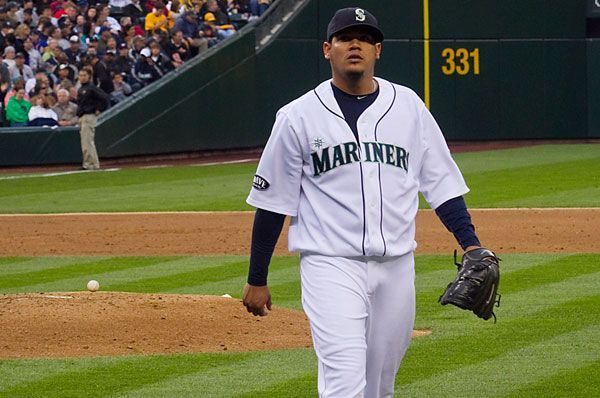 So, it turns out that part of the reason Mariners pitcher Felix Hernandez–King Felix to his many fervent fans–decided to stay in Seattle was pancakes. That’s what a charming profile in Tuesday’s New York Times reported.

“For Hernandez, the choice came down to comfort. Comfort in his neighborhood, east of Seattle in the Bellevue suburbs, where his two children play in the local parks. Comfort in the direction being taken by the Mariners’ organization, its minor league teams laden with young talent. And comfort food at his favorite local eatery, Chace’s Pancake Corral, an unassuming joint that suits its most superstar of clients,” Greg Johnson wrote.

Holy smokes! Restaurants, especially ones as old school and low key as the Pancake Corral, which has been flipping flapjacks in Bellevue since 1958, don’t often get that kind of high-profile plug from a beloved superstar. High fives Fifi!

When I called the restaurant this morning to ask what they thought about being mentioned in The New York Times, the perky gal who answered the phone said she had no idea of the inkage in the nation’s most important newspaper.

She did say, yes, Felix had been in with his family recently. And no, he doesn’t have a “usual.” “He likes to mix it up,” she said.

I can’t help but wonder if this mention will mean a flood of fans lining up for a table at the wildly popular Pancake Corral, where the menu emphasizes from-scratch cooking. Maybe they’d make the pilgrimage to find out what Felix likes about the place, and, on the off-chance that they’d bump into him and ask him to sign their King of Perfection T-shirt. Wait, does that sound like I’m scheming to become a stalker? No way! Well, maybe.

All I know is that reading that Felix Hernandez digs being a regular at this diner turned me into an even bigger fan of the man. Who, by the way, is pitching against the Yankees in New York today. Go Mariners!