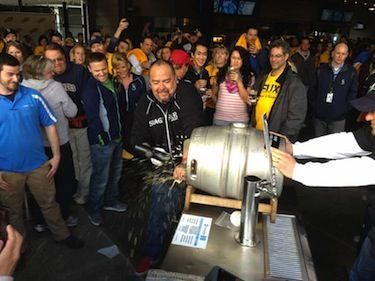 !–paging_filter–pEven for non-beer geeks like myself, there is something very intriguing about the word “firkin.” And now that I know what it actually means, and why it’s such a cool new addition to Safeco Field, I need to share./p
pFirkin Fridays are something that happen during every home game in The Pen, where local brew masters tap small kegs of cask conditioned ale. These cask-conditioned ales are made in a small container called a “firkin,” similar to a quarter-barrel, that contains 72 pints. This cask ale is commonly known as “real ale” to beer experts, like our own Kendall Jones, who was at last Friday’s inaugural firkin tap:/p
pOver at his emWashington Beer Blog/em, a href=”http://www.washingtonbeerblog.com/firkin-fridays-at-safeco-field-everybo…” target=”_blank”he explains the scene/a:/p
blockquotepBy the time they tapped the firkin, only serious beer fans remained. A lot of them. The demand was greater than the tap would allow, and there were some issues getting the beer flowing at an acceptable rate, but as soon as they dealt with it, the beer flowed as fast as possible – no tap, just poured straight from the keg. In other words, the firkin was drained as fast as it possibly could have been. Maybe five minutes?/p
/blockquote
pKendall has even more information about a href=”http://www.washingtonbeerblog.com/seattle-mariners-add-caskconditioned-b…” target=”_blank”cask-conditioned beer at Safeco/a and a href=”http://www.washingtonbeerblog.com/beers-at-ballpark-2014-finding-good-st…” target=”_blank”how to find good beer there/a in general. Heads up, bottoms up!/p