King County’s Trailhead Direct Is Back

After a successful season in 2018, the bus service returns with access to more trails 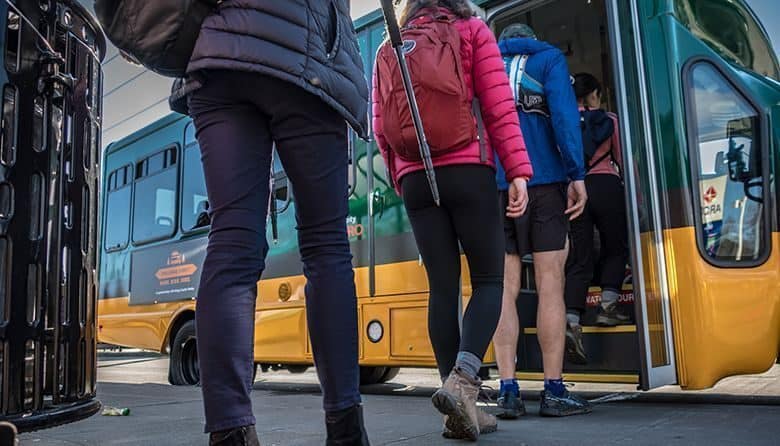 Attention, Seattle-area hikers: Trailhead Direct, a King County public shuttle service that takes nature lovers to some of the most popular Western Washington trails, is back just in time for peak hiking season. The program, a partnership between King County Metro and King County Parks, launched in spring 2018 and quickly gained popularity, servicing more than 10,000 hikers between April and October.

In its second season, which started April 20, the service is expanding its offerings to include an additional pickup point at the Link light rail Tukwila International Boulevard station to the popular Cougar Mountain Sky Country trailhead, along with a new destination added to the Mount Si route. Same as last year, hikers can catch the shuttle near three other Sound Transit Light rail stations: University Street (downtown), Mount Baker and Capitol Hill, and at the Issaquah Transit Center. All four routes operate on weekends and holidays recognized by King County Metro until the end of October, leaving every 30 minutes from 7:30 a.m. until early afternoon (see Trailhead Direct website for specific times). The shuttles are equipped with bike racks. Well-behaved dogs are welcome, though owners may have to pay an additional ticket fare depending on the size of the dog. The cost is $2.75 per rider, the same price as Metro’s inner-city fare, and can be paid by ORCA card, Transit Go mobile ticket or cash with exact change.

The new service has been enthusiastically embraced. In a survey conducted by the King County Metro, 90 percent of participants thought the new service was a success, citing that Trailhead Direct was more environmentally friendly than driving and allowed hikers without cars to easily access hikes.

Hiking Tips from a Peak Performer

David Birkner has been a Wharton economics student, a naval oﬃcer stationed at Pearl Harbor, a travel agent, a freelance writer, a pioneering environmental activist, an outdoor guide, an elementary school teacher and a successful entrepreneur. But mostly, the 86-year-old walks – on all ﬁve continents, from the southernmost tip of South America to North Africa to…

This story appears in the July-August combo issue of Seattle magazine and Seattle Business magazine. Subscription information is here. The pandemic threw a lot of plans off course, but it didn’t cancel alpine wildflower season, bright yellow autumn larches or mountain waterfalls. Despite social distancing guidelines, there’s no better time to escape to nature. Studies show…

Go Take a Hike at One of These Five Hidden Gems

Snoquera Falls; Cutthroat Lake in the North Cascades; A biker on the Olympic Discovery Trail at Olympic National Park

Chasing Waterfalls on the Olympic Peninsula

This article appears in print in the March 2020 issue. Click here to subscribe. Due to the COVID-19 outbreak, many of the restaurants and places mentioned will be closed and/or offering to-go only. Turn this weekender into a day-trip by leaving early, packing your own food, picking a waterfall and staying safe by following health guidelines as recommended by WA-DOH….

This 6.5 mile hike takes you to the beautiful Mason Lake

It’s November and shorter daylight hours mean shorter hikes. If you’re not quite ready to bring out the snowshoes and full winter gear, it’s also a good time to explore the lower elevation hikes. Late October brought a round of early snow to the mountains, and closed off a lot of trails close to Seattle…