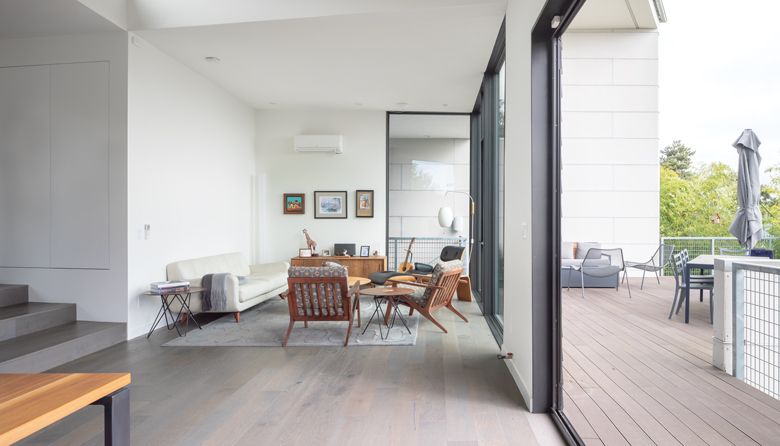 When Tom and Amy Gaffney bought a charming two-story, Northwest contemporary–style 1939 home in View Ridge in 2012, there was much to love: rich wood paneling, a whimsical layout with little rooms and narrow corridors that suited their young son’s active imagination, and, best of all, a breathtaking view. But even though large east-facing windows framed the sunrise over Lake Washington and the Cascade Mountains, the Gaffneys’ afternoons were spent shrouded in darkness, thanks to only a few street-facing windows and an entry that abutted a steep driveway and didn’t let in much natural light. OPTIMIZING THE VIEW. Top: Along with a design that brings ample light into the house, architect David Coleman says the Gaffneys wanted to minimize the height of their home to preserve their uphill neighbors’ views. Above: The folding glass doors in the modern kitchen allow the Gaffneys to enjoy the outdoors while staying out of the elements

Soon after they moved in, they’d talked about renovating to remedy some of the aging features of the home and to bring in more light. By 2015, the Gaffneys were ready for a brighter future, in the literal sense. To help them figure out a plan for upgrading their home, they hired architect David Coleman, whom they had met several years before on the sidelines of a soccer field as their sons played together.

Although they’d hoped to save the existing building, Coleman says, it became obvious the old home had significant issues: An aged roof and single-paned windows were insignificant compared to the foundation of a wing, added in the ’70s off the southeast side of the main floor, that had settled significantly, resulting in sloped floors. There was also a stairway connecting the home’s main and lower levels that wasn’t code-compliant. A preliminary estimate of what it would cost to renovate the existing home revealed that starting from scratch wasn’t that big of a financial leap. So, the Gaffneys moved into their next-door neighbor’s accessory dwelling unit (ADU) and watched as Coleman tore their home down to its foundation and began to build anew. Coleman’s design presents an understated street-facing facade that fits in well with the surrounding neighborhood, but inside, the home takes a dramatic turn. A short set of stairs lead from the entry perch down and below the line of sight from the street into a modern great room comprising a living room, dining room and an eat-in kitchen on the home’s main level. Coleman installed floor-to-ceiling folding glass panels along the length of the room to allow unfettered access to a large outdoor deck extending off the back of the home.

For Coleman, the effect is almost theatrical. “When you go down into that room, the ceilings rise up,” he says. “The clerestory windows become apparent, flooding light into the house from the west, so it undeniably creates this dynamic and exciting quality from the moment you arrive.” VANITY FAIR: The overall brightness of the home is carried through to the bathroom, where white paint and clean lines help preserve the airy feel

Behind the kitchen but with an open, direct sight line from the entry landing is a study, where Tom, a consultant who helps retailers build their own photo and video production studios, and Amy, an attorney for Boeing, can work from home. Opposite the study across the entry to the north is a hallway that leads to a bathroom and a bedroom belonging to the Gaffneys’ now teenage son. The small corner room gets plenty of light thanks to west-facing, floor-level windows and a large window that faces east over an angled section of the back deck.

The lower-level suite features a laundry room as well as two bedrooms, a bathroom and large family room. A glass door provides direct access to the outdoors and a wide terrace that juts out about 8 feet before a steep drop-off to the backyard 12 feet below.

The master suite is largely encased in glass, allowing unobstructed views to the east and north

Overlooking it all is an upper-level master bedroom and bath on the north side in the tallest portion of the home. With its simple, modern finishes, framed floor-to-ceiling windows, and a killer view to the east and—thanks to a strategically proportioned cutout in the outer shell of the building—to the north, the suite is easily Tom’s favorite room in the house.

“When David came to us with this idea for a ‘master-suite sky room,’ we had to laugh,” Tom says. “Doesn’t everyone need a sky room? But we kept an open mind, and when we saw the plans, it was just so unique and special. In Seattle, you just want to get as much light as you can, and David really delivered.”

> This family home was selected by a panel of architects for the AIA Seattle Home of Distinction program due to its creativity within the tight parameters of the existing footprint and steep-slope site. Dreaming about a home design project and not sure where to start? AIA architects can help. aiaseattle.org/askanarchitect