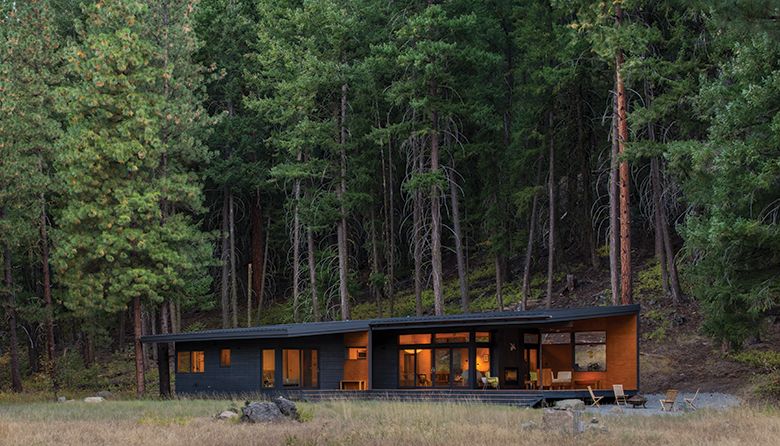 When Jason, an outdoors enthusiast and Hood River, Oregon, resident, read a magazine article about cross-country skiing in Washington’s Methow Valley, he put the area on his must-visit list. Eventually, he and his wife, Cheryl (the couple requested the use of their first names only), made the trip to this recreational Shangri-la. What followed is a familiar narrative—up to a point: couple falls for the valley, buys some property and makes plans to build the vacation home they’ve always wanted. The rest of the story, however, has little in common with the typical dream-house scenario, which often involves sprawling great rooms, three-car garages and palatial master suites. Jason and Cheryl wanted something small. In fact, the smaller, the better. GATHERING PLACE: Glass doors next to the steel-clad indoor/outdoor fireplace and along the meadow-facing wall connect the main indoor living area and the outdoor deck

“We were thinking 1,000–1,200 square feet, total,” Jason says. “We don’t have a big family and didn’t think we’d have people coming over all the time, so we didn’t want to pay for space we didn’t need or deal with extra upkeep and maintenance. A couple small bedrooms, one bathroom, a living space and a garage—that’s all we were looking for.”

To make it happen, in 2012, the couple tapped Seattle-based Balance Associates (which has since morphed into Prentiss Balance Wickline Architects) and decided on a plan that was indeed small in terms of its footprint but felt much larger thanks to its connection to the outdoors. Owners Jason and Cheryl keep everything open in the summer

To give the home some privacy from the main road that meanders through the Chechaquo Ranch neighborhood, architects Tom Lenchek and Margo Peterson-Aspholm chose a site near the back of the 1.32-acre lot. Though it doesn’t provide a mountain view, this orientation allowed the architects to take advantage of the passive sunlight coming in from the south while keeping the interior room and decks shaded and cool with the help of roof overhangs. And there’s still a great view from just about every perspective. The backside of the home looks out through a ponderosa pine forest at the foot of Flagg Mountain, while the front faces south toward an open meadow that teems with wildflowers in the summer.

Peterson-Aspholm stuck to a severe, stark palette (primarily dark gray and woodgrain inside and out, with the occasional yellow accent indoors), but chose different yet durable materials to bolster the dichotomy between the home’s mountain and meadow sides. The backside features metal siding that folds up over the top of the home to inform the roof. Beneath the fold, finished plywood covers the interior back wall of the home and the ceiling. Meanwhile, the meadow-facing side of the home has painted shiplap siding, sliding glass doors and large windows to let in the light and fresh air. GOLDEN HOUR: Much of the palette for the home (including the bedroom, left, and kitchen, below) sticks to neutral grey and creamy white with natural wood, but pops of yellow were inspired by the arrow leaf daisy that covers the meadow in the summer

In keeping with the homeowners’ minimalist mandate, the architects arranged the rooms within two distinct rectangles. The front rectangle features one small bedroom; an even smaller flex room, which the couple uses as an office/guest room; and a simple bathroom with an open shower and a single sink. The back houses the garage, mud room and a bare-bones linear kitchen that opens first into a dining area and then beyond that into a living room area. A hallway, enclosed by glass at each end, connects the two rectangles, which are also anchored by a large covered wood deck that extends out from the indoor living area at the east end of the house, adding nearly 800 additional square feet of living space.

While Jason and Cheryl don’t intend to live full-time in the valley (the compact abode’s simple features are decidedly more suitable for a vacation home), eventually, they’ll spend winters and occasional getaways there. For now, the couple lives full-time at their condo in Hood River, near Jason’s engineering job, outside Portland, and spend about one week out of every five in the valley, where they pass much of their time outside. SIDE EFFECTS: The backside of the home (pictured) is covered in metal siding, while the front facing the meadow utilizes painted shiplap

“Our house is right across the street from a ski trail hub, so we can jump on the ski trails and ski in four or five different directions immediately, or get on our bikes in the summer,” says Jason. “Then, when we’re home, we can relax and enjoy our big outdoor room. The location is just right, and the house is just really comfortable.”