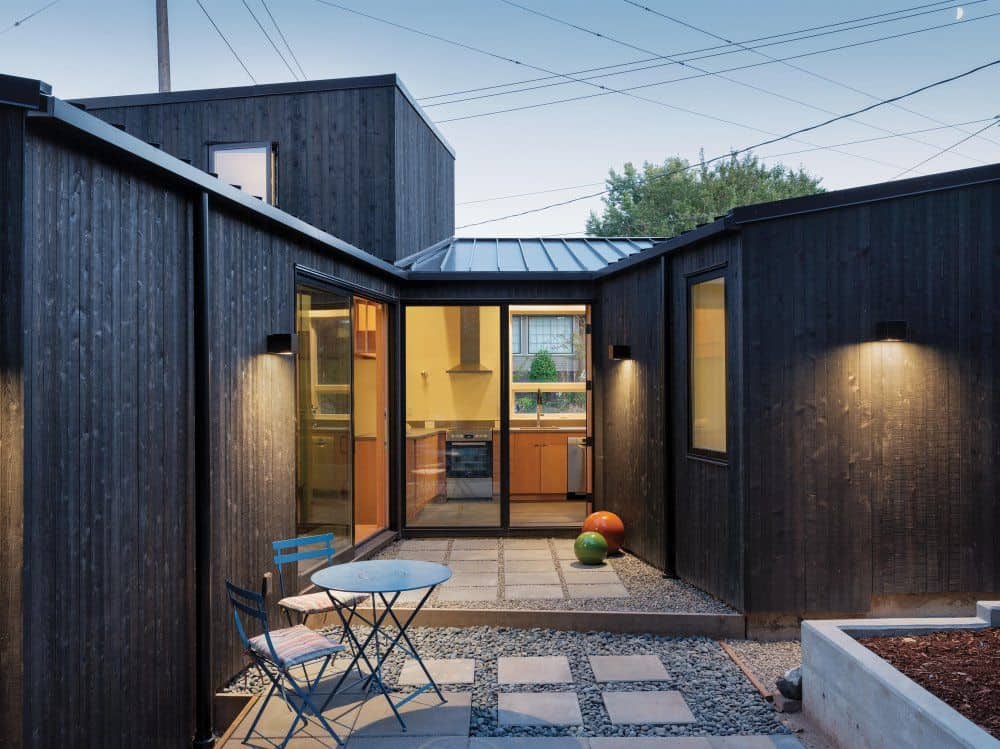 Pullman residents Iris and Mark Lange purchased a century-old Green Lake farmhouse in 2014 as a possible residence for a son who was considering attending college in Seattle. At the time, they thought the lot might also be a good future fit for a small new home known locally as a detached additional dwelling unit, or DADU.

The property had much to offer, but stood just two blocks from eight lanes of Interstate 5 at its southern exposure.

Erecting a sound-dampening wall against the direction of the relentless noise was the best affordable engineering solution, but opened up a can of architectural worms. No southern-facing windows to maximize solar gain and cheer the 760-square-foot space? To further complicate the natural lighting challenge, the Langes also hoped for a bright, u-shaped central courtyard oriented away from the freeway noise and yet also providing privacy from the nearest street.

The couple turned to Robert Hutchison Architecture, or RHA, a Seattle firm with a big appetite for small spaces. Hutchison and his five employees operate in “Pop-Out Studio,” a 430-square-foot office he designed and had built behind his old farmhouse in Fremont.

The cantilevered two-story structure includes multiple meeting and design spaces with plenty of shelves for books and storage space for architectural models. Like Courtyard DADU and many other of RHA’s projects, Pop-Out Studio features a clean modern look and darkly stained, rustic exterior wood siding.

The firm “specializes in the design of contemporary projects that balance beautiful, inspiring spaces with economic, pragmatic solutions,” Hutchison says.

Hutchison, a longtime instructor at the University of Washington’s College of Built Environments, has a strong interest in investigating the boundaries of architecture and creating works that evoke a strong sense of place. He balances architectural commissions with research, writing, photography and installation projects.

Hutchison and staff architect Sean Morgan were up for the Courtyard DADU challenge. The pair had also teamed up for what is perhaps RHA’s most famous project, Casa de Baños, an off-the-grid bathhouse in Mexico.

At Courtyard DADU, floor-to-ceiling windows on the north face pull in light, which bounces off sheetrock walls painted white. Interior apertures, including a transom over the bathroom door, provide pathways for light to move unfettered throughout the airy floor plan. “We wanted it to feel big,” Iris Lange says. “It’s almost one room. You can read the entire envelope, no matter where you are in the house,” Hutchison adds.

The home’s three levels roughly trace the steep slope of the lot, and help promote the roomy vibe. Its levels also allow for a generously vaulted ceiling that otherwise wouldn’t have been allowed under DADU height restrictions.

Concrete slab floors run throughout the home and are splashed with a dark, undulating treatment to mimic carpeting and to enhance the sense of open range as one level spills into the other. “We have just one carpet in the home, to add a bit of color,” Iris says.

There is no unsightly large HVAC system to mar the exterior lines of the home. The Langes decided they could do without air conditioning. Two water-heating units, which are small and tucked away, are enough to power the energy efficient radiant floor heat system that counterbalances the loss of passive solar.

The project cost $425 per square foot, roughly what might be expected for a larger home. There aren’t many cost efficiencies with building DADU homes, Hutchison notes. Nor does there seem to be much relief from the city’s arduous permitting process when building DADUs.

The city of Seattle loosened DADU restrictions just as RHA was wrapping up its design process. New rules would have allowed the Langes to bump the size up to 1,000 square feet and make other alterations, but they elected to hold the course.

“Rob and Sean worked really hard to come up with a great plan, and having a smaller home allowed for more green space outside,” Iris notes. The Langes are both prominent plant biologists and researchers.

Jousting with the design team was one of the most rewarding aspects of the project for Mark, who gravitates toward Mediterranean architecture, while RHA has a Japanese bent. “I enjoyed the interaction,” he says. “They’re super positive, and it was fun to go back and forth on staying within budget, but also adding amenities.”

Iris was especially pleased with the bathroom, saying, “It’s the best one I’ve had in my life.”

Late in the design process, the Langes felt that the project still needed a capstone. They focused their attention on the stairway to the guest loft, which the designers had treated like an insertion, almost like a piece of furniture.

“They really wanted it to be an architectural moment,” Hutchison says.

The solution was space-saving alternating stair treads crafted from steel plates, with vertical steel rods for handholds. Viewed from a distance, in context with the slats of the loft railing, a person climbing the stairs looks like a tiny tuner working the wires inside a piano.

When it was suggested that Courtyard DADU defies traditional classification, Iris exclaimed, “Perfect!”

“That’s the thing. I think there is not a style,” Mark Lange adds. “Call it Northwest Contemporary.”

This family home was selected by a panel of architects for the AIA Seattle Home of Distinction program due to its creatively changing the experience and views of this home toward a comprehensive design, all within the existing footprint.

Dreaming about a home design project and not sure where to start? AIA architects can help. aiaseattle.org/askanarchitect

Seattle’s Former Columbia Congregational Church and Allied8: A Match Made in Heaven