AIA Seattle Home of Distinction: Tucked into the Trees

This article originally appeared in the May/June 2021 issue of Seattle Magazine. 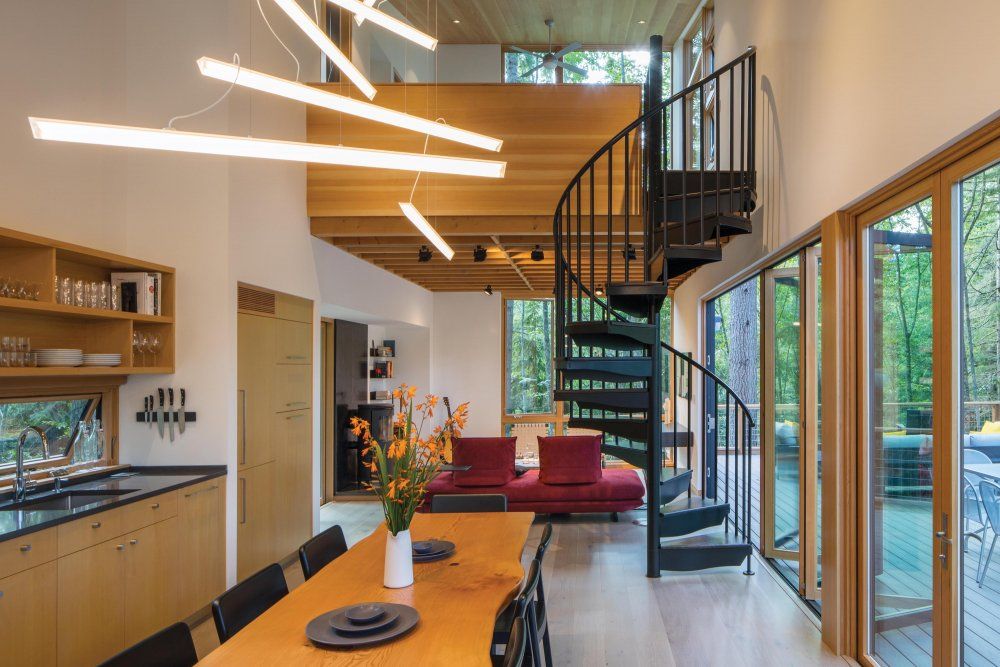 Many human neighbors of Little House/Big Shed don’t even realize the homestead exists. Located on the southern end of Whidbey Island, it is not so much constructed as it is lovingly slipped into the silviculture like a bookmark in a treasured classic.

David Van Galen, AIA, and wife Jane, a noted educator and author, fell in love with the 5-acre inland piece of property the first time they walked into its woods on a stormy December day.

“There is something very powerful about the wind moving through the trees,” David Van Galen says.

Harnessing that power by protecting those trees became the focus of the project. The couple took a full five years to ponder how best to present their proposal. Siting wasn’t the issue. The parcel was likely logged in the first half of the last century, with three acres of second-growth woodlands towering over a rolling meadow.

A narrow swath of alder remains among the dominant Douglas firs, rising from the bottom of a picturesque 40-foot ravine to a glade of ferns. Invasive holly and briars had sleep among the trees. During the design process, the studio and guest quarters were combined into a separate smaller structure, reducing the footprint of Little House and making it easier to wedge among the trees. The structures pivot at the remains of an old-growth fir, which nourishes a younger tree growing from its roots.

The siding is Corten steel, an alloy noted for its ability to invite agreeable rust to its exterior and resist disagreeable rust it at its core. Stained cedar trim and aluminum-clad wood windows complete the natural effect, bringing house and shed into dialogue with their surroundings. The structures are topped by standing seam metal roofs. Much like the trees themselves, each building surface uniquely responds to time, wind, water and sun.

Van Galen may swing through the trees with his wife Jane, but he’s no Tarzan. He speaks softly in carefully considered full sentences, and prefers to listen and collaborate.

Like Hall of Fame pitcher Hoyt Wilhelm, who homered in his very first major league at bat, Van Galen hit his first pitch out of the park. He had never designed a residential structure prior to Little House/Big Shed, despite having received his degree in 1986.

Unlike Wilhelm, who never hit another homer, Van Galen has a burgeoning portfolio of smash successes. His distinguished career in public architecture includes many local schools, where he seeks to connect students with the world around them.

The couple had worked together to remodel several homes over the years, but never built anything from scratch. As time has passed, their once separate architectural sensibilities have intertwined to become one.

“A project like this can sometimes put a heavy strain on a marriage, but in our case, I think it brought us closer together,” David Van Galen says.

The secret to their success is leaning on each other’s strengths.

“My wife is my intellectual superior, and I excel in the spatial realm,” David says.

Jane does not disagree. She has grown to appreciate those spatial skills. At one point during construction of Little House/Big Shed, as she was puzzling over the chosen placement of windows, the late afternoon sun splashed an alluvial fan of light across the ceiling joists. “It was one of those magical moments,” Jane says.

Getting sent to the woodshed is no punishment in this household. The Van Galens take turns using the Big Shed studio for various creative projects. In retrospect, they might have made it larger to accommodate both working simultaneously.

They now regret the decision to install just a compact dishwasher. Covid-19 upset their long-established routine of hunting and pecking for nourishment at local eateries.

One day, David Van Galen looked out his bedroom loft window straight into the penetrating gaze of a couple of barred owls just 10 feet away.

Each admired the others’ roost. If there was any shouting, it was the wind moving through the trees.

This family home was selected by a panel of architects for the AIA Seattle Home of Distinction program due to its creatively changing the experience and views of this home toward a comprehensive design, all within the existing footprint.

Dreaming about a home design project and not sure where to start? AIA architects can help. aiaseattle.org/askanarchitect