A Kabin in the City 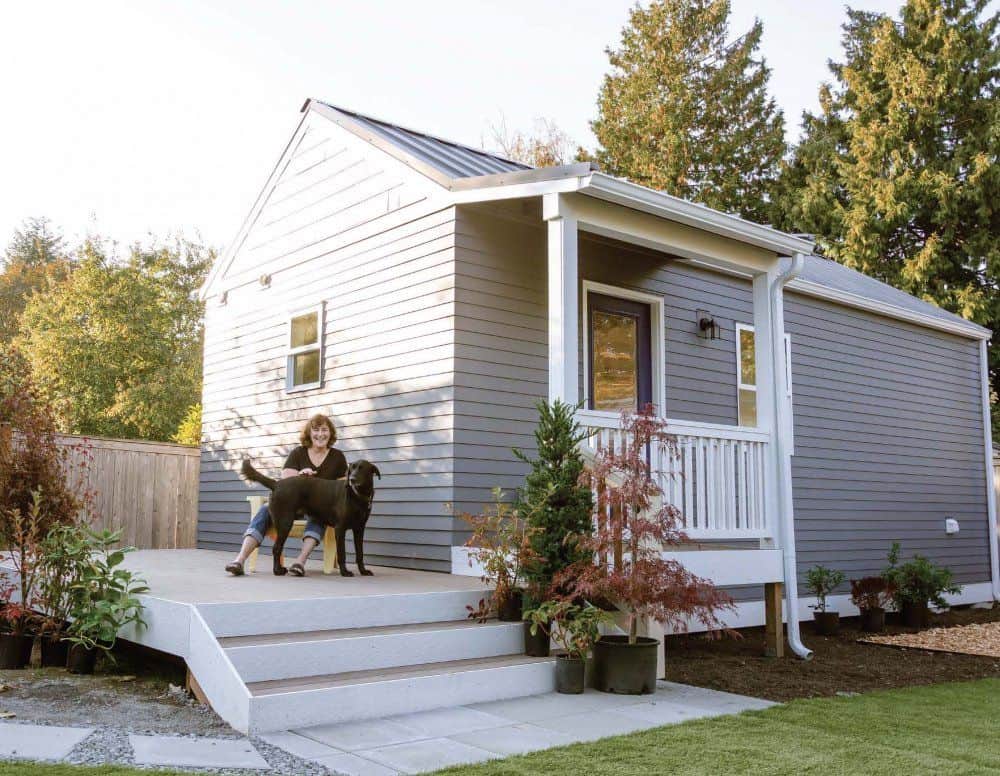 This article originally appeared in the November/December 2020 issue of Seattle Magazine.

Seattle’s lowest-profile contractor is also one of the city’s highest-volume homebuilders. In just its second year of operation, Bellevue-based MyKabin has already constructed 42 backyard cottages and offices, mostly in Seattle proper.

Clint Jones and Tom Todaro launched the business in anticipation of Seattle’s new briskly waving green flag for detached additional dwelling units (DADU). Todaro was initially the more enthusiastic of the two, concedes Jones, a long-time contractor and tradesman. Jones figured his longtime poker buddy was trying to draw to an inside straight.

“I saw a problem in the marketplace. Company after company after company offers backyard cottages and kits, and they advertise prices, and every one of them says, ‘Then go find your own contractor and put in your own foundation,’” Jones explains. “Especially in Seattle, a foundation can cost $10,000 on one site and $50,000 on another. You have engineering and all the legwork that goes into that. It’s really daunting for the homeowner. One thing I found out in this business is that if you can’t control the price Jones knew foundations weren’t the only hurdle to affordable backyard cottages.

“Our industry is really antiquated. I felt it was very hard to find a way to best serve clients. I saw an opportunity to create something the industry needed — a preplanned unit where you know what it’s going to cost up front,” he says. “It was so frustrating for me to see people go through the life cycle of a project. You go to an architect and say, ‘Hey, I want to build a new addition to my home.  How much is it going to cost me?’ And the architect will say, ‘Well, I don’t know. What do you want to build?’

“You always have this chicken versus the egg thing. People go through months of planning, getting excited and seeing it come to life, only to realize that it’s going to cost 50 percent more than budgeted and that it’s not going to cash-flow. It’s a big, long waste of time and energy.”

To achieve turnkey service with a guaranteed price, Jones devised a variety of modern and traditional cottage styles that perch on a modified pier foundation system that speeds construction and minimizes environmental complications such as groundwater runoff.

The units are assembled on site. Some components, such as shelving, are manufactured off-site. “We don’t have to fight with power lines or trees,” Jones says of MyKabin’s construction style, which he describes as “not really modular, not really prefabricated. It’s a modified prefabrication process. There isn’t really a label for what we do.”

Speed of construction has been a key to MyKabin’s success, especially in the age of Covid-19, when many are busily reconfiguring the way they live and work. In Seattle, you can have a MyKabin cottage up and inlawing in seven months, which is 120 days faster than the average builder, according to data collected by the city, Jones says. Some features, such as color and floor finishes, can be customized.

MyKabin’s swift execution has been especially popular with homeowners who are not fanciers of squatting contractors. “We disrupt your life less than anyone else,” says Jones.

Units start at about $97,000 for the MyOffice, a 253-square-foot unit (hobbit not included) with a bathroom, and $120,050 for MySuite, which is essentially an extra bed-room with a three-quarter bath. A maximum size, two-bedroom home designed for small family living costs about $300,000. All units are fully permitted, legal and energy efficient.

Apartments.com pegs the average current rent for a Seattle studio at $1,407 and $1,713 for a one bedroom. Historically low mortgage rates are making MyKabins a viable investment, with many home owners able to obtain a 20-year fixed loan for monthly payments of around $450 to finance smaller units.

In what was billed as the most progressive additional dwelling unit policy in the country, Seattle removed the owner-occupancy restriction on backyard cottages in August 2019 and waived the requirement to create a new off-street parking spot. The city also bumped up the square foot-age of backyard cottages to a maximum of 1,000 square feet, directed city agencies to streamline the permit process and allowed both an attached additional dwelling (attic, basement or built-on) and DADU unit on each property, where previously the home owner had to choose one or the other.

“If you’re a homeowner who really wants to monetize your house, you can have a supplemental income, times two, which is a pretty big deal,” Jones says.

Will your property qualify? It can get a bit complicated. MyKabin offers free assessments, and Seattle Mayor Jenny Durkan recently unveiled a new website, ADUniverse, which features preapproved cottage designs and a step-by-step guide to adding an additional dwelling unit.

“While in the middle of global health pandemic, we are even more aware that we continue to face an affordability and housing crisis. It’s our responsibility to use every tool available to increase housing options in every part of our city,” Durkan says. “These new designs will help streamline permitting issues, allow home owners to provide alternative housing choices to renters within their communities, and create options for residents to age in place or live with loved ones.”

The primary reason permits are rejected is a lack of buildable space. “If the lot does have enough buildable space, we have a model that will be the right size,” Jones says.

“Seattle has been the leader,” Jones says. “Kirkland is very, very friendly. Burien is very, very friendly; it just changed its regulation. A lot of areas are opening up.” The company is hustling to keep up with the changes. Kirkland recently bumped up its DADU maximum to 1,200 square feet and MyKabin quickly answered with a new model.

Pedestrian-friendly neighborhoods are seeing the most MyKabin activity and pro-vide the best return on investment, he adds. “It would be a little bit less desirable to have a backyard cottage on your place in Issaquah than it would in Green Lake, right?”

“For a lot of people, putting Mom in a backyard cottage is a lot better than putting her in a nursing home,” he says. “Beyond that, we’re hearing a lot more chatter about the benefits of an intergenerational lifestyle.”

Seattle’s former Columbia Congregational Church and Allied8: A match made in heaven