How Four-Plexes Can be Good for the Neighborhood

The softer side of the new multiplex residences that dot Ballard 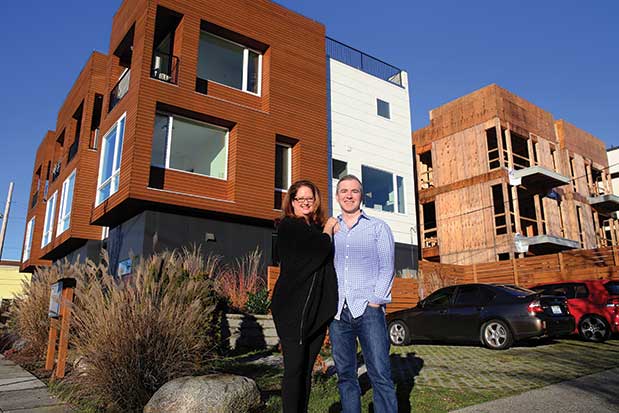 When Karen Lawson and Sebastian Wright were looking for a place to call home two years ago, the boxy four-plex a half-mile south of Ballard High School wasn’t even on their radar.

“We had driven past it multiple times in the six months we were looking and didn’t once think of coming in,” says Lawson, 42, a homeopath and part-time studio director for a Seattle interior designer. “We were looking for something with charm and personality, and this didn’t tick either of those boxes for me.”

But when their offer on their “dream home” in Columbia City was rejected, they reconsidered. Interior photos of one of the three-story units had just been posted online, and the couple decided to take a closer look.

“Something clicked,” says Wright, 42, who works in concept innovation at Starbucks corporate headquarters. “We instantly both said, ‘We can live in this place.’”

What changed their minds were the floor-to-ceiling windows in nearly every room, the rooftop terrace that stretches the length of the footprint and the high quality of the craftsmanship—something they hadn’t seen touring other multiplexes. Having lived in tight quarters in New York City for 12 years, Lawson particularly appreciated the spacious kitchen and thoughtfully incorporated storage space.

“In our tiny Manhattan apartment, I was storing my boots in the oven and covering the kitchen sink with a cutting board just so I could have a place to chop vegetables,” says Lawson. Here, a cubby under the stairs just off the kitchen serves as a spacious pantry, built-in shelves in the second-floor laundry room hold towels and bedsheets, and a walk-in closet in the third-level master suite offers plenty of room for the couple’s wardrobes—including the boots.

The unit’s single designated off-street parking spot was plenty for the one-car couple. Lawson uses the car to get to work in the Chinatown/International District on most days, and Wright commutes to SoDo by bike.

The verticality of the 1,600-square-foot unit is both a drawback and a benefit. The four flights of stairs between the ground-floor kitchen and the rooftop can be a challenge, especially when the couple is entertaining guests on the terrace in the summertime.

On the other hand, says Wright, the separation of the spaces allows for sanctuary and privacy, especially when out-of-town guests stay for extended visits.

Wright and Lawson’s modern-looking townhouse is one of dozens of single-family homes that have popped up in the Ballard neighborhood, which—until recently—had seen very little new construction. The couple knew their new property would be tentatively received, given how critics say such units threaten the livelihood of single-family neighborhoods, so as soon as they moved in, they reached out to their neighbors by hosting an open house. The gesture served to satisfy curiosity about the new complex and also brought a warm welcome from the friendly, tight-knit community of surrounding homeowners.

Wright and Lawson can understand their neighbors’ initial concerns. Construction of an identical four-unit townhouse is currently under way just 10 feet to the north of their home. It has already blocked the light that used to stream in through the couple’s rear sliding glass doors, and it remains to be seen how their privacy will be affected.

It’s something multiplex dwellers and owners of single-family homes in this Ballard neighborhood will have to get used to.

Another multi-unit development just broke ground down the street.