How a Wine Geek Became a Member of Washington’s Winerati

This article originally appeared in the November 2015 issue of Seattle Magazine. 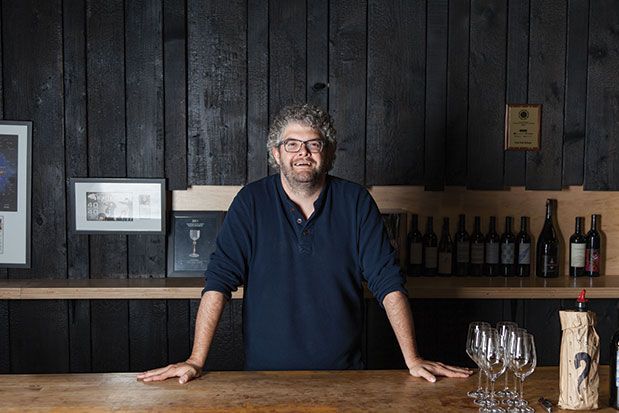 Applied mathematician Paul Zitarelli had just graduated from business school when the economy crashed in 2009. He had two options: take the six-figure Amazon offer as a senior financial analyst, or start his dream company, an e-newsletter selling boutique Washington wines.

He swears it wasn’t an easy decision.

“It seemed stupid to launch a business at that time, but I wanted to write about wine for a living,” recalls Zitarelli during an interview inside the 6,000-square-foot SoDo headquarters of Full Pull Wines, where cases of Upchurch, Kerloo, Gramercy and other small-production Washington cult wines are stacked to the ceiling.

If you recognize Zitarelli’s name—full disclosure: he’s our wine writer—you know he is now a celebrated Pacific Northwest expert, growing his newsletter from 400 to 4,000 subscribers by granting access to some of the region’s most coveted producers, including a recent exclusive on La Rata, a new project from Cayuse Vineyards’ assistant vigneronne Elizabeth Bourcier. In 2013, Wine Enthusiast magazine named Zitarelli among its “40 Tastemakers Under 40.” And, for the past two years, he has been named Retailer of the Year by the Washington State Wine Awards. Zitarelli offers incredible value combined with a deep respect and understanding of Washington growers and terroir.

But how did this self-proclaimed wine geek become an elite member of Washington’s winerati? After graduating from Harvard, Zitarelli moved from Boston to Seattle in 2004 with his wife, Kelli. One day, he found himself in the wine aisle at QFC, marveling at the wide selection of local producers.

“I remember thinking, ‘What the hell is going on? There is a legitimate wine industry here,’” he says. Tastings and trips to eastern Washington followed, and by the time Zitarelli started grad school at the University of Washington’s Foster School of Business, he was fine-tuning his palate and penning a Washington-focused wine blog he called Swordfern Wines.

The impetus for Full Pull—a term he picked up in New York’s Adirondack Mountains that means a perfect, joyful day—came when readers began leaving him the same comment: “This wine sounds great. Where can I get it?” Full Pull is similar in scope to Garagiste, which was founded by another Seattleite, Jon Rimmerman, in the 1990s. But Rimmerman’s focus is on the wines of Europe, while Zitarelli’s is on those of Washington and Oregon.

“There’s still that thrill of discovery here,” Zitarelli says. “We’re getting better at figuring out what is best planted where. We know that Cabernet thrives in the Horse Heaven Hills or that Grüner Veltliner and Pinot Noir can make sense in Columbia Gorge. That’s what keeps me jazzed about Washington.”

Today, Full Pull has a staff of four, including director of operations Pat Malloy, a veteran of the Seattle wine trade. Zitarelli tastes close to 2,000 wines a year and narrows that down to an exceptional 200—about four offers a week—which he blasts off to subscribers in his familiar prose. Here’s a sample describing an allocation of Fidelitas 4040, a Cabernet-dominant cuvée from winemaker Charlie Hoppes’ winning 2012 vintage: “Charlie really knows how to swaddle rich Red Mountain fruit…. For most of this seamless mouthful’s trip across your palate, it is a luscious little truffle of a wine, but my oh my does this pick up power and structure as it rolls into a finish with sneaky back-end chew.”

“I want it to feel like an email from a good friend who happens to know a ton about wine,” he says.

When he’s not selling wine, Zitarelli is studying it. He recently earned the highest honors with the Wine & Spirit Education Trust and is now in the throes of studying for his Master of Wine, a title thus far bestowed upon 318 wine experts worldwide, including just two Washingtonians, Joel Butler and Bob Betz.

He also recently acquired an import and distribution license, which will allow him to sell his own label, Block Wines, in local restaurants. Zitarelli launched the project earlier this year with friend and Two Vintners winemaker Morgan Lee. Together, they source top-quality fruit from all over the state. Zitarelli sets the vision—a single varietal that comes from a single block of a single vineyard—and Lee makes the wines.

Their first two releases, a Chenin Blanc and a Sémillon, are as close to winemaking as Zitarelli will ever get, he says. “I get so excited about the breadth and depth of wines out there,” he says. “I don’t know if I’d have the focus or discipline to be locked into one or two.” 2014 Block Wines Sémillon Boushey Vineyard Tauro Block, $22.99
Zitarelli longed to make a Sémillon that had the natural acidity to stand on its own (without the typical addition of Sauvignon Blanc). Dick Boushey’s north-facing vineyard in the cooler part of the Yakima Valley delivered. The juice was aged in neutral French barrels with a touch of stainless steel and malolactic fermentation that result in a creamy mouthfeel. I love the zippy lime flavors and fleshy fig undertones. Savor it with crab cakes or buttery poached salmon.

2014 Block Wines Chenin Blanc Rothrock Vineyard Block V10, $22.99
This little-known gem of a vineyard in Yakima Valley dates back 40 years (yes, ancient for Washington). The Chenin fruit was harvested early (September 10), and then pressed whole-cluster and fermented with native yeasts in used French oak barrels and a little stainless. The nose is beautifully floral, and the flavors remind me of Gala apples dipped in Turkish honey. Despite a tad of residual sugar, this Chenin’s finish is austere. Zitarelli suggests pairing it with duck liver mousse or spicy mussels in green curry. Amen.

Zitarelli’s Block Wines are available via his e-newsletter, Full Pull. The Semillon is available at Purple Cafe & Wine Bar locations and the chenin blanc is available at Sky City Restaurant. The project’s first two reds, a Grenache and a Cabernet Sauvignon, are due out in 2017.