Poet laureate Kathleen Flenniken is showcasing the work of countless local poets during her term.

This article originally appeared in the September 2012 issue of Seattle Magazine. 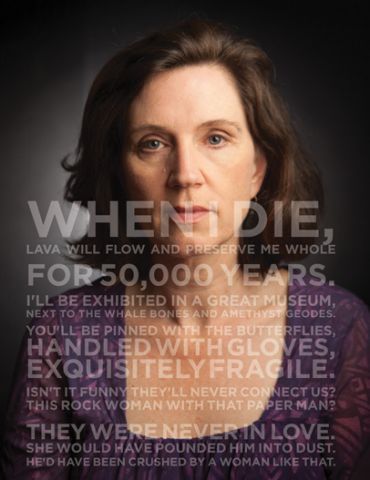 A master’s degree in civil engineering isn’t a prerequisite for becoming Washington state poet laureate, but it does tend to make for a unique perspective. Kathleen Flenniken, who began her two-year term as poet laureate in February, lives in View Ridge, but grew up in Richland, the daughter of a chemist who spent his career at Hanford Nuclear Reservation. “When I graduated from college in 1983, women were entering the civil engineering field in unprecedented numbers,” Flenniken says. “I wanted to make my father proud, and I also wanted to make a good living.” She followed her father’s footsteps to Hanford, where she worked until 1986, when she left to earn her master’s in civil engineering from the University of Washington. Her new book of poetry, Plume, combines personal history with historical research to portray the sense of betrayal felt by many who were assured that working at Hanford was safe.

Even while working as an engineer, she knew she wanted to write. “I had always had an urge to write (which resulted in the writing of a lot of bad love poems in college),” says Flenniken. “I prided myself on being an engineer who could write.” After leaving a Bellevue consulting firm to raise her three children, she took a night class in poetry and soon moved from engineering physical structures to building stanzas. She says poetry’s compact succinctness speaks to her analytical nature, the side of her brain that craves order and precision. “Stories are too long and involved,” she says. “Poetry is more manageable.” Echoing her first book of poetry, Famous (2006), which examines a mother’s domestic realm (and which earned her the prestigious Prairie Schooner Book Prize), she says, “Poetry is on the scale of a woman’s life. You can write it while the water’s boiling.”

Right now, however, Flenniken has more than a few irons in the fire. She is president of the board of local arts nonprofit Jack Straw Productions, and president and co-editor of Floating Bridge Press, which publishes Washington state poets. She continues to publish new work in journals ranging from Garrison Keillor’s Writer’s Almanac to scrappy new Seattle literary magazine The Monarch Review. That’s all in addition to her ambitious plans for her stint as poet laureate.

Flenniken intends to organize poetry readings, workshops and events in all 39 counties in the state. So far, she has done so in 11 counties, with nine more (and counting) planned for this fall. She calls it being a “matchmaker” between poets and audiences that would benefit from exposure to poetry. “People think they don’t ‘get’ poetry,” she says. “But poetry is like music—you have to find the kind you like.” Inspired by her new post, Flenniken also created a website, The Far Field (kathleenflenniken.com/blog), on which she publishes work by three to five Washington poets each week, everyone from university professors to third-grade girls. “I want to give a sense of the wide range of poets and styles all over the state,” she says.

As for her own writing, Flenniken says, “I’m steeping in a poetry tea with all my poetry duties, so I get the itch to write perhaps more than before, but finding uninterrupted time has been a little challenging.” And for her, writing poetry means taking the good with the…not so good. “You have to give yourself permission to write bad poems. I wrote 10 bad poems for every good one,” she says. “That’s the only way the good ones get written.”

NEXT UP: As poet laureate, Flenniken does many readings around the state, including 9/6 at Eagle Harbor Books on Bainbridge Island. For details on this and other readings, visit kathleenflenniken.com/blog.

Meet all of the 2012 Spotlight Award Winners