An old UW building where the ‘Boys in the Boat’ hung out has many layers of history, says Knute Berger, who is all for the current effort to restore it to its former glory 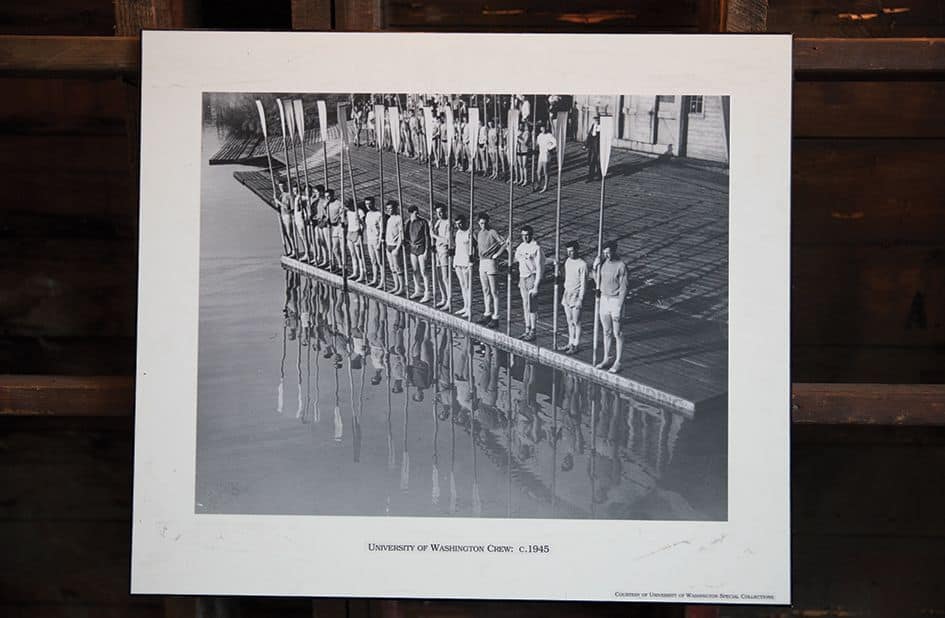 While Seattle has struggled to save The Showbox on First Avenue, another even more storied landmark is being singled out for revival. Boosted by a best-selling book and a movie in the works, that landmark is a little-known former military structure on the shores of Lake Washington. It is the former home of the now famous “Boys in the Boat,” the University of Washington Husky men’s rowing team that won an Olympic gold medal at the 1936 Berlin Olympics, beating two boats from then-fascist countries Italy and Germany. It was an event that hinted at the American prowess that would later come to bear in World War II combat, represented by a generation of young men.

The University of Washington (UW) has not always gotten it right when it comes to protecting structures of historic significance. In recent years, the university claimed to be exempt from Seattle’s landmarks ordinance (the state Supreme Court disagreed) and proceeded to demolish the More Hall Annex, aka the Nuclear Reactor Building—a building on the National Register of Historic Places—despite pleas from preservationists. But now the UW has embraced such protections in an effort to restore the old ASUW Shell House, located in the shadow of Husky Stadium on the Montlake Cut. The city designated it an official landmark in 2018—the first on campus—and the UW is now searching for a lead donor as it explores launching a $13 million campaign to renovate and endow the Shell House, a key project in the reimagining of the university’s approximately 2-mile stretch of waterfront. 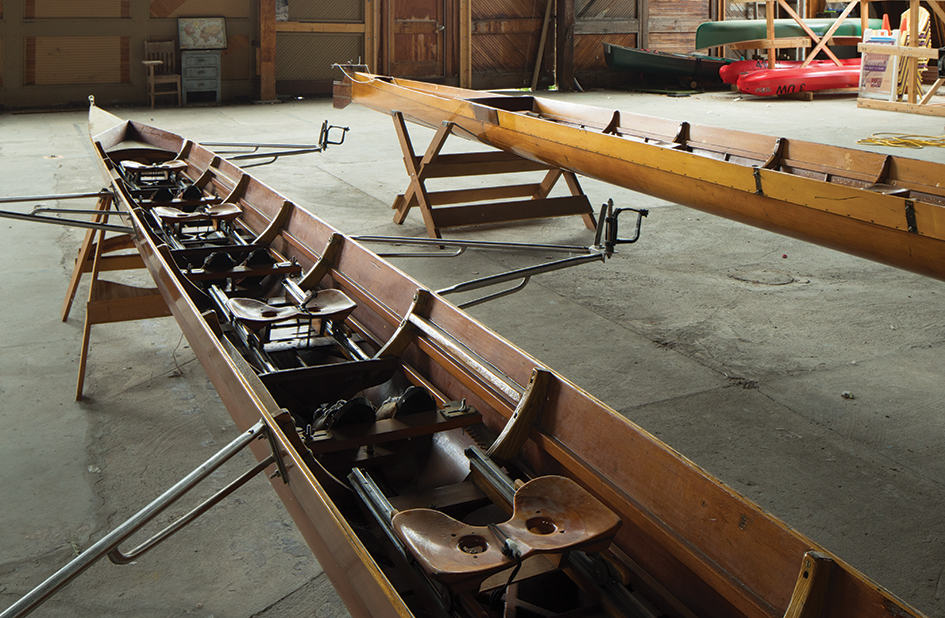 Efforts are under way to renovate the old ASUW Shell House which began its life as a Navy airport hangar. The city gave it landmark status in 2018

The layers of significance here are extraordinary. The building is an old U.S. Navy airplane hangar and instructional facility that dates back to 1918‒19. It was built on native ground where a strip of land once connected north Seattle to south before Lake Washington and Lake Union were connected by a canal. The land was a portage and gathering site for native peoples who beached and carried their canoes here—the main mode of travel in pre-settlement times. It was called stukh-ug-weelth by the Lakes Duwamish people, meaning “carry a canoe.”

After World War I, the Navy hangar—one of only two surviving wooden Navy hangars from WWI in the country—became the home of the Husky crew and George Pocock, the world-famous builder of racing shells. Pocock built that 1936 gold-medal-winning boat, Husky Clipper, and also revolutionized the sport of crew racing with innovative shell design and Northwest materials. Like Northwest indigenous peoples, he came to see the unique virtues of red cedar on water; he called it “the wood eternal.” He had come to know it while building flying boats for Boeing in the 1920s. It turned out to be a magic ingredient for faster, and cheaper, shells.

In the days before pro sports, rowing was the focus of local fandom in Seattle as well as the centerpiece of the spring opening of boating season, as it still is. And while the Husky program has brought home many more championships and gold medals, the publication of The Boys in the Boat in 2013 by Daniel James Brown took everything to a new level. Its story of young men rising from Depression-era poverty and adversity to achieve at the highest levels has inspired people the world over.

Fans of the book began showing up at Montlake unannounced, wanting to see the old Shell House where the crew trained and where its boat was built. Melanie Barstow, a UW student rower, began giving members of the public “Boys of ’36” tours. In the past three years, without major promotion, she has guided some 3,500 “Boys” fans.

The old Shell House is an extraordinary structure. It covers 10,000 square feet. Built of Douglas fir, it feels a bit like a glorious old barn. The loft where Pocock built his famous shells is still in place. Vast hangar doors face the lake, doors through which the Navy hauled in its instructional floatplanes and Husky rowers launched their shells.

The Husky crew moved to a new facility decades ago, and Pocock’s operation moved out in 1949. The building then became known as the Canoe House and has been used for storage and canoe rentals. The refurbished Shell House would be an events facility available to rent for conferences and weddings, a place to exhibit images and artifacts of the storied rowing history, a space for students and perhaps boatbuilders. The Burke Museum, for example, stores a recently carved cedar hunting canoe there, a replica of one found in the Green River in the early 1960s. It’s the kind of everyday river canoe the Salish people used, and after the Shell House’s renovation, the public might be able to take it out on the lake. A gift shop and café are also envisioned as part of the building’s restoration.

It is hard to imagine a physical structure more redolent with history: a native gathering spot, a naval aviation station, a place where Boeing influenced boat design and vice versa, a spot where championship athletic activities have been part of local sports and culture for generations, the building site of world-renowned racing shells made of local materials and the home of the 1936 team that beat Hitler’s crew. “I see the building as a storyteller,” says storyteller extraordinaire Daniel Brown. Now it can be a powerful representation of historic connections.

Disclosure: Knute Berger recently wrote an introduction for a book to be published this fall by the University of Washington Press and received an honorarium earlier this year for a speaking engagement to a UW alumni group.

FATHER FIGURE: This bronze statue of Chief Seattle was created by artist James Wehn and unveiled in 1912

Activists, union members and more participated in the WTO protest in 1999

There were numerous attempts to invent flying objects, which coincided with UFO sightings in the late 1890s

When I was a kid growing up in Seattle I was largely oblivious to birds. We had robins in the neighborhood and occasionally found their cracked blue eggs on the ground in the spring. There were seagulls aplenty. The garbage dump used to be at Union Bay near Husky Stadium where we dumped our trash….

Human Composting Becomes an Option in Washington, But Is It for Everyone?

Human composting will soon be a choice in our state, but Knute Berger has a different end in mind

AFTER LIFE: Walking through Lake View Cemetery in Seattle is a walk through Seattle’s past; the cemetary holds the gravesites of the city’s founders as well as famous citizens

Seattle has always been sports town—Knute Berger notes how in 1919, hockey and baseball were both making headlines

I was dialing the way-back machine to 1919 and noticed a couple of interesting reminders of our times, a century later. Hockey was in the news, and so was bad baseball. Seattle had a Pacific Coast league baseball team, at various times called the Giants, Indians and Rainiers. In 1919, the team played at Dugdale…