By Intro by Rob Smith

Summer is lavender season in Sequim. Get to know the truth about this popular herb. 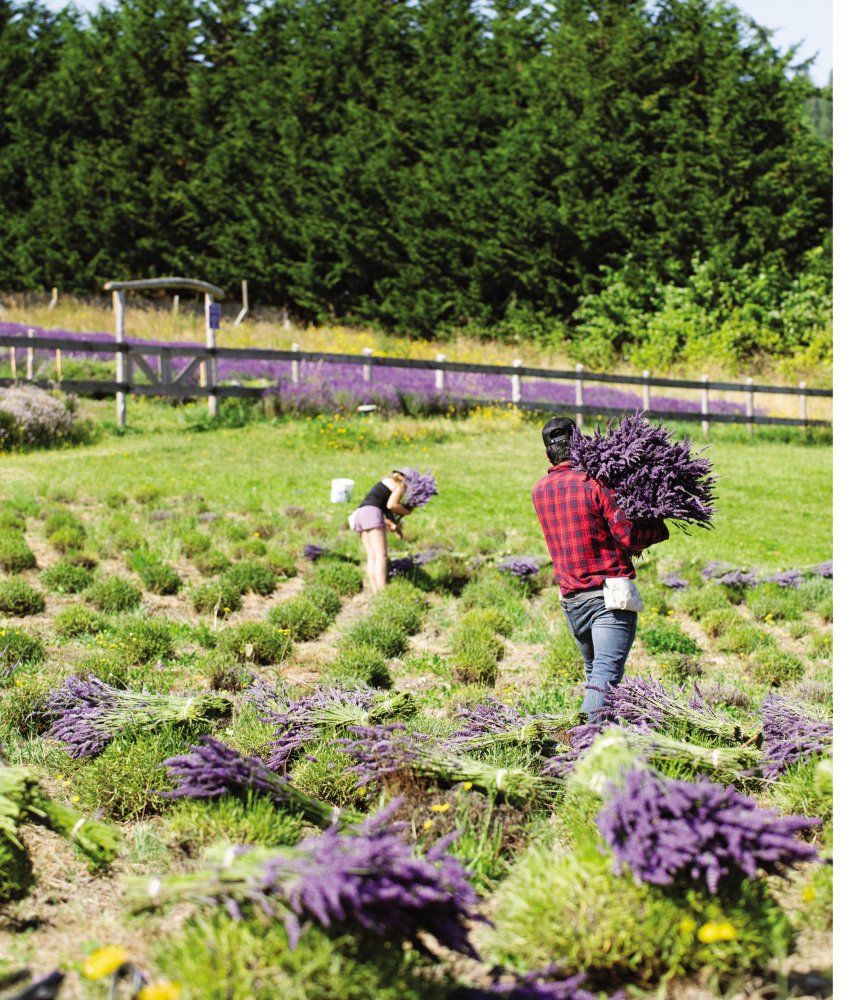 July and August are peak lavender season in Sequim, which is also known as “America’s Provence.”

From that rain-shadow valley’s purple ﬁelds comes a new book, “Lavender: 50 Self-Care Recipes and Projects for Natural Wellness.” The book focuses on the fragrant blooms and surprising culinary ways you can use the versatile herb.

The book is from Bonnie Louise Gillis, a Sequim resident who has written 28 books with more than 400,000 copies sold. Here is an excerpt:

Lavender has wafted its way around the world and through the pages of recorded history. Like an amulet, the herb was dangled to chase away demons, moths, and disease, and its oil was prescribed for headaches, hysteria, and gas. When Europe was ravaged by plagues, lavender was stuff ed into the beaks of bird-shaped masks to ward off  the Black Death—a disease that people thought was transmitted by scent.

Hidden within many myths are buds of truth, and so it is with lavender. The clean, powerful scent of the herb did indeed protect some from plagues as it fragranced the air, but not because it banished the evil smell of disease. Science has shown that those diseases were often carried by fl eas on rats, and the scent of lavender repelled both rodents and biting insects. Thanks to modern science we also know that lavender essential oil does indeed contain some disinfecting, soothing, relaxing, and pain-relieving properties.

Lavender continues to scent our modern world, appearing in culinary seasonings, household cleaners, and aromatherapy. But with one significant change: Lavender’s resurgence is now fueled by science instead of superstition, and by delight instead of desperation. This timeless herb has truly earned its place in today’s society as a potent and delectable ingredient for wellness.

At least 45 distinct species of lavender grow around the world. All of them belong to the genus Lavandula. Within those species, more than 450 unique varieties and cultivars of lavender have been named. In the rain shadow of the Olympic Mountains and in the rocky soil of Sequim, Washington, you’ll find over 150 kinds of lavender. Purple farms dot the countryside in this “Lavender Capital of North America,” and tufts of lavender bloom in profusion around homes, parking lots, and sidewalks. Only in Sequim, during the annual Lavender Festival, can you visit the beautiful fields of more than a dozen farms within ten square miles.

True to Sequim’s bootstrap heritage, family-owned lavender farms fill their shops with organic, hand-harvested products—from hand-distilled essential oils to hand-thrown pottery; from handmade lavender teas to cookies, from greeting cards to goat-milk lotion. Of the many lavender varieties locally grown, most of them are cultivars of the species Lavandula angustifolia or Lavendula x intermedia (lavandin).

Dubbed with names such as “common,” “true,” or “English” lavender, lavandula angustifolia is the most cold-hardy species. The sweetest perfumes and deepest blues also come from L. angustifolia, along with soft pastels, such as white, pink, periwinkle, and classic lavender. The essential oil has a delicate fragrance and is highly sought after for aroma-therapy, fine perfumes, and culinary uses.

Lavandin is the labradoodle of the lavender world. From one lavender parent comes winter hardiness and a sweet scent. From the other, longer stems, a higher yield of oil, and a sharper camphor scent (think muscle-rubs). This hybrid first appeared when bees cross-pollinated two species in neighboring fields.

Although bees love the nectar of lavandin, humans tend to prefer the milder L. Angusti-folia (English) lavender for their own culinary use. ‘Royal Velvet’, ‘Melissa’, and ‘Folgate’ are just a few of the more palate-pleasing culti-vars of lavender. Complementing both sweet and savory dishes, a thimbleful of lavender will flavor an entire pot or punch bowl.

In a teaspoon-sized serving of lavender, you’ll get about 1 percent of the body’s daily need for iron and even less of the micronutrients vitamin D, calcium, and potassium. But experts agree that a healthy diet should focus on variety and nutrient density, and in that way lavender can play a small but integral part in supporting your overall wellness and a healthy immune system.

Pepper and lavender are quite the power couple in a kitchen. The floral punch of lav-ender is equal to the bite of pepper, and their yin-yang adds a robust accent to such foods as fresh tomato or cucumber slices, roasted or fried potatoes, grilled fish, scrambled eggs, and green salads. And how about a big bowl of lavender-pepper popcorn! If fitting to your dish, consider adding a few more layers of flavor into the mix: dried minced onion, mustard seeds, all-spice berries, coriander seeds, fennel seeds, and garlic flakes all play well with pepper grinders and lavender. Makes ¾ cup

• 3/4 cup peppercorns (four-peppercorn blend, rainbow, or a combination of Tellicherry, white, and green).
• 1 tablespoon dried culinary ‘Provence’ lavandin buds.
• Combine the peppercorns and lavandin in a small mixing bowl and stir to incorporate.
• Pour the mixture into a pepper grinder and use for seasoning as desired.

Lavender salt makes a tasty rim on cocktail glasses, a topping for fresh melons, or a savory rub for meats and roasted vegetables. And a jar of this flavorful infused salt makes a lovely handmade gift! Makes 1 cup

• 1 cup pink Himalayan salt or other favorite coarse-grain salt.
• 1 tablespoon dried lemon zest (optional)
• 1 to 2 teaspoons dried culinary L. angustifolia lavender buds.
• Put the salt in a small mixing bowl and set aside.
• In a spice grinder or single-serve food processor, combine the lemon zest and 1 teaspoon of the lavender. Grind for 5 to 10 seconds.
• Transfer the lemon-lavender mixture to the bowl of salt and whisk well to incorporate. Taste-test and add more lavender if desired. Whisk again to blend the flavors.
• Pour the mixture into a salt grinder, or store in a container with an airtight lid. Use for seasoning as desired.

©2021 by Bonnie Louise Gillis. Excerpted and adapted from “Lavender: 50 Self-Care Recipes and Projects for Natural Wellness,” by permission of Sasquatch Books.

Layer up and enjoy the beauty of an unpredictable Seattle Spring

The collection was put together by Tom Stockley's daughters