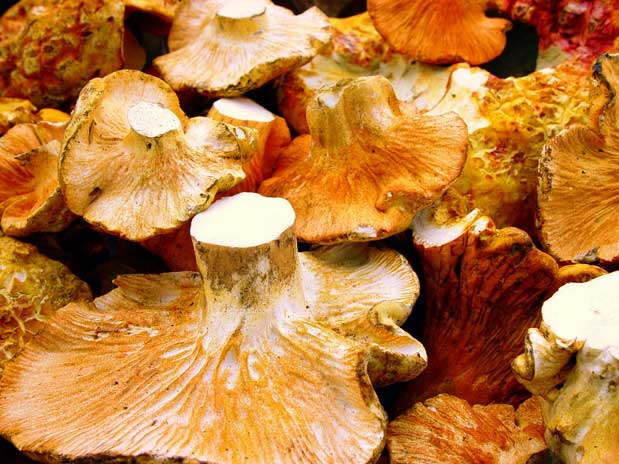 This article originally appeared in the September 2012 issue of Seattle Magazine.

Beginning around Labor Day, I’ll be heading into the mountains to go lobster hunting. Say what?

I’m in search of a crustacean of the woods. It looks a lot like a boiled lobster: fire-engine red. Such blazing color is often nature’s way of saying “Do not touch,” but not so with the aptly named lobster mushroom. I scoop as many as I can find into a bucket and haul them home for a tasty meal of land fish.

Mycologists will tell you that the lobster mushroom is the result of one fungus parasitizing another. Around here, the usual host is a type of white, gilled mushroom known as the short-stemmed russula. When the lobster fungus, Hypomyces lactifluorum, attacks it, an unpalatable mushroom is miraculously transformed into a choice—if weird-looking—edible.

Lobster mushrooms have a velvety texture when sautéed, not unlike cooked lobster, and their succulent meat hints pleasantly at seafood. Processing one can be a chore: Lobster mushrooms collect more than their share of dirt on a cap riddled with nooks and crannies. Don’t be afraid to scrub them hard, and then dice them up and sauté with a little butter, cream and cognac to make a colorful duxelles.

September is a good month to hunt. The woods surrounding Seattle are lousy with lobsters; they especially like old-growth Douglas-fir forests. We start to see them in local farmers markets in August.

Check out Lang’s recipe for lobster mushroom risotto on his blog, Fat of the Land.