A charming spot from the folks behind Bastille and Poquitos - with a serious scotch selection. 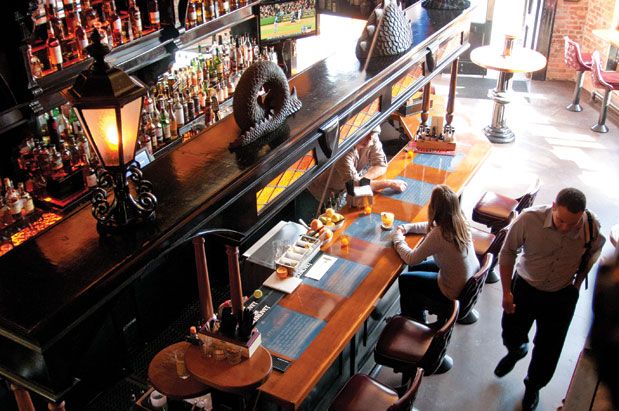 The Scotch Rocks
It’s fitting that Macleod’s has a large print of Scottish poet Robert Burns on the back wall; in 1785, he wrote in the poem Scotch Drink: “O Whisky! soul o’ plays and pranks!/Accept a bardie’s gratfu’ thanks!” With more than 50 Scotches arrayed behind the bar, Macleod’s is a place Burns himself might have liked, perched on a plush stool as the friendly bartenders reached for another bottle.

While the temptation is to solely stroll the Scotch selection, the menu also features tempting cocktails, such as the refreshing star drink of the late 1800s, the Mamie Taylor (here also known as the Inverness Mule: Scotch, ginger beer and fresh lime juice, $7.50), and cocktails, such as the Stonehouse (Buffalo Trace bourbon, amaretto, orange juice and lemon juice, $8.50). There’s not much food on offer, but you probably won’t care.

Settle in for a Spell
With a crowd that’s a hitch more seasoned than the masses up the road, Macleod’s is an ideal spot to settle into, with its brick walls and pretty wooden bar—topped by a Nessie that’s surprisingly uncutesy.