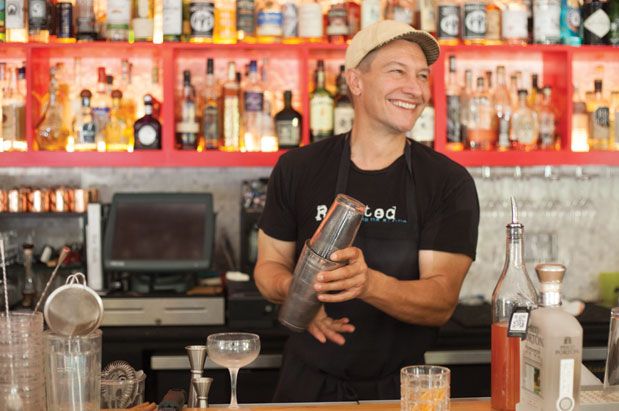 Jon Christiansen started working behind the bar at Tulio’s in the early ’90s, learning to sling classic cocktails such as grasshoppers and stingers. He went on to accumulate bartending experience at establishments ranging from trendy clubs to upscale eateries, and eventually found a home with Eric and Sophie Banh’s restaurants (Monsoon, Monsoon Bellevue, Ba Bar and 7Beef), where, as the bar director, he is tasked with developing Asian-inspired cocktails that feature quirky flavor combinations to build distinctive drinks.

“Balance and proportion hold a drink together,” Christiansen says. “Acid makes a cocktail pop in your mouth,” which is why he calls on a cabinet of vinegars and gastriques (also made from vinegar) to add zing to cocktails.

Whereas other bartenders traditionally rely on citrus acids such as lemon or lime, Christiansen plays with vinegars instead. The woody flavor of sherry vinegar adds depth to a drink. “I shake it with egg white and amaro, so it’s like a refreshing whiskey sour,” he says. A syrup of reduced balsamic vinegar will lightly sweeten a drink while giving it tang—perfect with strawberry purée and whiskey for his popular Point of View cocktail. Rice wine and white wine vinegar are refreshing and pair well with a neutral-based spirit such as vodka in a Bloody Mary.

“I think there is a jazz composition to it,” Christiansen says. And vinegars are his current muse.