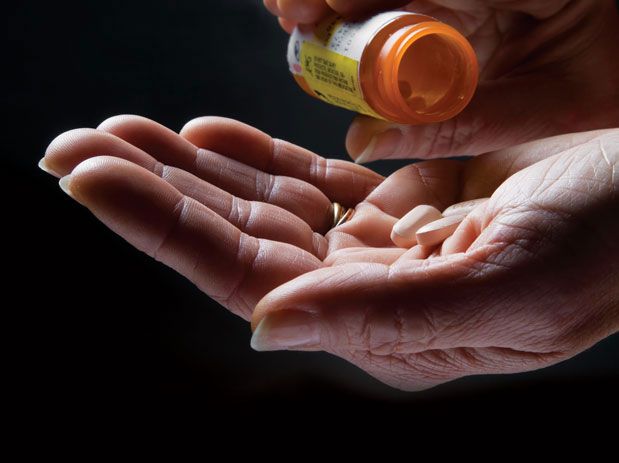 When Kaycee Kiesz of Seattle found out about a Virginia Mason Medical Center clinical trial for the first-ever oral multiple sclerosis drug, which later came on the market as Gilenya (pronounced “jeh-len-ee-ah”), she jumped at the chance to participate. She was diagnosed with MS in 2001, and after trying several different injectable treatments, she signed up and was accepted for that 2009 clinical trial. She’s been on it ever since and loves it. “I was tired of taking the shots so I was anxious to try it,” Kiesz says. “It’s been so much easier. Now, I don’thave to excuse myself to go to the ladies room to administer a shot. This is very discreet.”

This oral drug is just one example of the fast-moving innovations in multiple sclerosis research, an area of medicine that, in the last few years, has seen monumental advances with Washington state at the forefront. Gone are the days when physicians relied on superstition and often treated MS patients with spa water, injections of silver nitrate and even toxic strychnine. In the 1970s, it took an average of seven years to diagnose MS, but there have been more advances made in the last decade than in the preceding century. Kiesz considers herself lucky, even though she has been living with the daily struggles of MS for the past 11 years. The 39-year-old Starbucks executive continues to work full time, leads a busy social life and is active in her community; she chairs the annual Starbucks MS Walk and Bike teams and in 2004 received the National Multiple Sclerosis Society’s annual Spirit Award. Like many with MS, Kiesz’s first hint that she had the disease was when she temporarily lost sight in her left eye. Although her first reaction to her diag-nosis was “Why me?” she has vowed to take control of her life and her disease.

Treatment of any kind was virtually nonexistent until 1993 when the first injectable MS drug, Betaseron, was approved by the U.S. Food and Drug Administration. Today, there are nine FDA-approved therapies, including two new pill forms introduced in the last two years, plus another half dozen drugs that are either in late-stage development by worldwide pharmaceutical companies or already before the FDA for review. “This is definitely an exciting time for newly diagnosed individuals,” says Dr. Mariko Kita, director of the Multiple Sclerosis Clinic at Virginia Mason Medical Center, who has been instrumental in leading research and clinical trials supporting new MS treatments. It was Kita’s clinical trial that Kiesz joined in 2009.

Still, more than 100 years after multiple sclerosis was first identified as a chronic disease of the central nervous system (brain and spinal cord), it remains one of the world’s most complex and difficult medical puzzles, with no cure and no definitive cause. Multiple sclerosis is a frustrating, disabling, often progressive disease in which the body’s immune system attacks the protective covering, known as myelin, that surrounds nerve fibers in the brain and spinal cord, in much the same way insulating materials protect electrical wires. When the myelin sheath becomes inflamed or is destroyed, electrical signals cannot be conducted between the brain to the rest of the body, resulting in unpredictable symptoms that vary from person to person: Some have numbness in their arms and legs, others lose their eyesight or balance, and some can become paralyzed and in very rare cases, even die. People with MS experience periodic and acute episodes or “flare-ups” in which proper function of the muscles is impaired, sometimes crippling the person. In some, these episodes can be mild and subside, leaving differing degrees of residual impairment. Some people can go months, or even years, without a relapse, while others suffer daily with severer symptoms from more progressive forms of the disease.

There is no explanation for why people in the Pacific Northwest are more susceptible to the degenerative autoimmune disease. There are more known cases of MS in the Pacific Northwest than almost anywhere else on earth, according to the National Multiple Sclerosis Society. “Whoever puts this puzzle together will get a free trip to Stockholm for a Nobel Prize,” says Dr. James Bowen, medical director of the brand-new Multiple Sclerosis Center, opened last April, at Swedish Medical Center’s Neuroscience Institute. MS has long been known to be more prevalent in communities at northern latitudes, possibly due to less sunlight and more vitamin D deficiencies. It is also more common in people of northern European heritage, which includes Washington’s large populations of Scandinavian and Germanic heritage. The disease generally occurs between the ages of 20 and 40, and affects women three times more often than men. While there is a genetic susceptibility to the disease, MS is not directly inherited.

Ongoing research at the University of Washington Medical Center, Swedish Medical Center, the Benaroya Research Institute at Virginia Mason and other local MS centers is helping scientists and physicians better understand MS, and our state is home to many of the nation’s leading experts in MS research: neurologists, scientists and medical researchers who work in some of the largest and most comprehensive MS centers, all contributing to the development of new ways to treat the disease. “You would be hard-pressed to find any area of medicine that is as robust,” says Bowen. “The pace of MS research is really quickening.” This year, the National MS Society is expected to invest more than $44 million in more than 350 new and ongoing projects in the battle against MS.

In addition to medical research, dozens of scientific studies are under way to determine the roles of differing immune cells in the hopes of discovering new clues to control or prevent the disease. One recent study led by Joan Goverman, a professor and chair of the University of Washington’s Department of Immunology, revealed how misguided killer white blood cells (known as T cells) could be linked to tissue damage in the brains and spines of people with MS. Under normal circumstances, those cells would help fight off disease.

Finding a cure can’t come fast enough for the estimated 2.1 million people worldwide afflicted with this disease. It’s so prevalent that every hour of every day, someone is told they have MS—more than 400,000 of them are in the U.S., with more than 12,000 diagnosed in Washington.

Physicians at Swedish, UW Medicine, Virginia Mason, EvergreenHealth and others have participated in studies on just about every MS drug on the market and those still in the pipeline. Swedish, for instance, is currently conducting 24 MS-related clinical trials and numerous studies, including two focusing solely on the “primary progressive” form of the disease—the most aggressive and hardest to treat. Swedish and UW Medicine also are involved in high-tech treatments for MS, including bone marrow and other types of stem cell transplants.

The most common form of MS drugs requires daily, weekly or monthly injections. For many people with MS, giving themselves shots is often painful and leaves welts on their stomach and legs. That’s why a slew of new oral medications have sparked a new era in the treatment of relapsing/remitting MS, the most common form of the disease. “These are clearly new, promising treatments,” says Dr. Annette Wundes, medical director of the UW Medicine Multiple Sclerosis Center. “They will improve a patient’s quality of life because it’s more convenient.”

Approved by the FDA in 2010, Gilenya has been shown to reduce relapses by 50 percent and brain shrinkage by 30 to 40 percent—but patients must be monitored closely, and the drug is not recommended for everyone. The second oral pill to hit the market is called Aubagio. Approved by the FDA in September 2012, its safety profile is well known since it is similar to a drug that has been used by rheumatoid arthritis patients for years.

Other oral treatments aren’t yet on the market, but are highly anticipated. Perhaps the most eagerly awaited is called BG-12, which the FDA is expected to approve this spring. Studies have shown that it reduces relapse rates by about 50 percent and slows progression of the disease compared with a placebo. Kita, who co-wrote BG-12 research published in the The New England Journal of Medicine, says the drug appears to have a better safety profile than other medications and will be a good addition. It is an antioxidant that has an anti-inflammatory effect and may protect nerves against injury. The drug has been used topically in Germany for the treatment of psoriasis.

The drug Lemtrada has not yet been approved, but is expected to show an actual reversal of disability, instead of just delaying the disease’s progression. It would be administered by injection five days in a row and then three days in a row a year later. While no one believes that the drug itself improves function with MS, says Bowen, “The drug delays progression and if the pro-gression is delayed enough then perhaps the body’s own healing can lead to improved function.”

Other drugs currently used by MS patients include Novantrone, which works by suppressing the immune system, and Tysabri, considered a second-line treatment when an initial approach fails. Delivered by monthly infusion, Tysabri is thought to be more effective but it comes with serious risks including, in rare cases, death.

Unfortunately, while many of the new medications are aimed at helping those with relapsing/remitting MS, which applies to about 85 percent of patients, there has been little headway for the remaining 15 percent who suffer the more debilitating progressive type of MS. “They remain kind of the orphans,” says Kita.

Another important MS patient group that is the subject of a growing body of research is children and adolescents. “People don’t think of MS as a childhood disease,’’ says Nicholas LaRocca, vice president of health care delivery and policy research for the New York-based National Multiple Sclerosis Society, which has an active chapter in Seattle. About 3 to 5 percent of all individuals with MS experience onset of the disease before age 16, and an estimated 10,000 children (defined as 18 years old and younger) nationwide have it, according to the National MS Society. Another 10,000–15,000 have experienced at least one symptom suggestive of MS.

When LaRocca was studying pediatric cases 20 years ago, he was hard-pressed to find 10 children with MS. But today, there has been an explosion of interest in research in pediatric MS. “These young people who used to be sort of hidden away, now have opportunities,’’ he says.

The amount and scope of MS research have expanded beyond searching for a cure to discovering new ways to treat the disease, improve upon the safety of medications, enhance rehabilitation for those who have lost their ability to walk, and repair and reverse nerve damage. Current studies are focusing on discovering how to fix the neural pathways to allow crucial signals to get through to the brain. “Years ago, when we first started talking about neural repair, it was like talking about taking a flight to planet Neptune; it was a wild idea,” says LaRocca. “We’ve come a long way, but we don’t have the spaceship built yet.”

Because extensive research is under way simultaneously to stop MS progression, restore function lost to MS and end the disease forever, LaRocca points out that a “cure” means different things to different people: For someone who has been recently diagnosed, a cure might be a way to stop progression or for someone who can’t walk, a cure could be restoring the ability to walk.

While doctors and scientists have a greater understanding of MS than ever before, a definitive way to end the disease remains elusive. Says Kita, “I still think it’s never fast enough.”