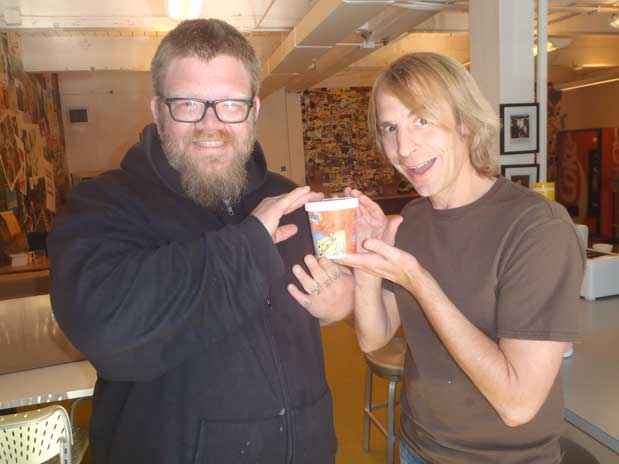 !–paging_filter–pFull Tilt’s Justin Cline is a huge music enthusiast–his original shop in White Center providing a venue for local performers from the get-go–so it seems particularly fitting that he created a special ice cream as a tribute to grunge iconnbsp;a href=”http://www.subpop.com/artists/mudhoney“Mudhoney’s 25th anniversary/a./p
p”I have always been a big fan and I thought ifa href=”http://www.seattlemag.com/seattle-magazine-gets-first-official-taste-ben…” target=”_blank” Ben Jerry could name ice cream after jam bands/a, I could name one after a band I thought was cool,” he said./p
pThe effort was collaborative, with Mudhoney front man Mark Arm offering input. Mark put the kibosh on honey caramel swirl and a espresso chip with honey. The winning combo is a honey cinnamon ice cream with a fudge swirl. The pints are decorated from artwork from a Mudhoney album.nbsp;/p
pAnd earlier this week, Justin dropped off a bunch of Mudhoney ice cream at Sub Pop Records, where Mark works.nbsp;/p
p”My mouth is so cold,” he said, after taking the first bite. When asked how he liked the second spoonful, he quipped: “It’s twice as good as the first.”/p
pThe special Mudhoney Full Tilt Ice Cream will soon hit the freezer cases around the city, but is currently available at Stockbox, the new grocery store on First Hill./p