By Sean Meyers and Rob Smith

The most popular ‘burbs to buy a home

This article originally appeared in the March 2021 issue of Seattle Magazine. 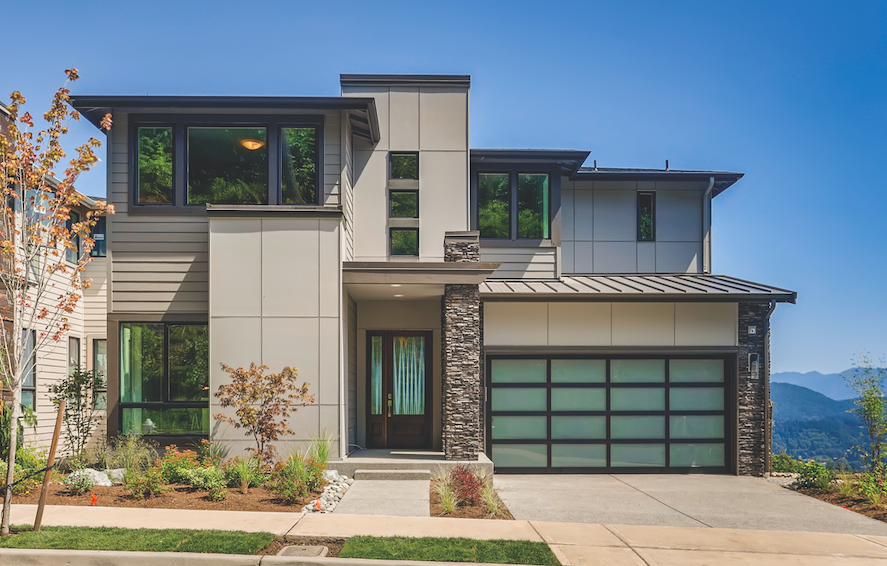 Claire and Derek Klein loved living in the downtown Seattle condo they purchased in 2016 across the street from the Washington State Convention Center. They took full advantage of the nightlife and pedestrian amenities in their neighborhood. Then Covid-19 hit and changed everything.

Derek, a technology consulting principal director for Accenture, began working from home. It didn’t take the couple long to realize that the 750-square-foot condo was never designed to serve as both a workplace and residence. Derek had no dedicated office and worked primarily off the dining room table. He retreated to the bedroom when he needed privacy for work conversations.

“It was tight,” Claire admits. “I felt cooped up.”

The couple last year moved to a 5,200-square-foot house in the Sunrise Beach area of Gig Harbor in Pierce County, roughly an hourlong drive or 30-minute ferry ride from Seattle. They miss the convenience of restaurants and takeout but, like everyone else, have discovered the joys of cooking as well as the challenges of home ownership: Their basement flooded their first night in their new house.

“I miss [Seattle] already, and it was really a hard decision to move,” says Claire, who notes that the couple now has the space to host visiting relatives, including her parents, who live in Olympia. “But we had incentive.”

The Kleins are part of both a national and local trend as former city dwellers descend on the suburbs as they ditch their commutes and work remotely. A report last month from Seattle online housing platform Zillow found that suburban homes sold faster than those in the city by the end of 2020. In Seattle and other expensive markets — think New York and San Francisco — suburban zip codes are typically 20% to 50% less expensive. Seattle, in fact, ended the year with higher inventory in the city than last year.

“The adage used to be that you drive until you find a house you can afford, and then you stop driving,” he says. “For a lot of people, that’s no longer true.”

The Washington Center for Real Estate Research reports that Puget Sound refugees have been a strong factor in spiking home prices as far away as Spokane and the Tri-Cities.

“What you have now is a lot of people saying, ‘We’re going to make that move now, while we can, and we don’t have to stay in Seattle,” says James Young, center director. “’We can live somewhere cheaper.’ It’s changed the paradigm of what’s commutable.”

for the Capitol Hill office of Coldwell Banker Bain.

“There have been a lot of homes for sale, but the pressure comes from a highly activated buyer pool that is simply desperate to grab whatever is available,” Shively says. “In many situations a buyer can’t even schedule an appointment to see a home before the seller has their offer review date.”

Here are some popular real estate markets with more room to Zoom than the Kleins’s small condo.

In January, those four markets combined exceeded the number of home sales in nearby and much more urban Tacoma by about 10%.

Puyallup — Pop. 41,000
Puyallup, home to a thriving daffodil industry, is far and away the hottest Pierce County market with 321 homes sold or pending in January. The median home listing price is $425,000.

Elbow room is the priority for many prospective homeowners in the wake of the pandemic, and recent studies indicate as little as 15 minutes per day of exposure to greenways can greatly improve mental health. Far from the crowd, Black Diamond is a former coal company town that has what is a rarity in King County: large uninterrupted blocks of undeveloped land. Walk-in-the-park-style communities such as Ten Trails add to the friendly vibe. City planners expect Black Diamond’s population to quintuple to 20,000 over the next 20 years, and at least seven permits for future school construction have already been granted. The median home sale price is $635,000, up 27% year-over-year.

Poulsbo — Pop. 10,600
“Little Norway” and/or the “Jewel of Kitsap County” is really starting to shine. Tri Pointe Homes, a builder of more than 18,000 Puget Sound-area homes in mostly Eastside locations during its 52-year history, chose Poulsbo as the toehold for its Westside operations. Tri Pointe’s Poulsbo Meadows lists homes from 2,108 square feet starting around $500,000, a price increase of about one-third from a year ago. President Ken Krivanec was attracted to Poulsbo’s walkability, bookstores and bakeries “It’s a rare find and a cool place to visit,” he says.

Paciﬁc County — Pop. 21,700
Located in the southwest corner of the state, Pacific County is home to “the world’s longest [28 miles] continuous peninsula beach,” and was recently designated as one of three Washington “Zoom town” regions by the Northwest Multiple Listing Service [NWMLS] because it is scenic,

fast growing and draws telecommuters from Seattle. The Pacific County median home price rose more than 50% in 2020, the highest increase in the state, but at $239,000, it may also be the best value. Oysters, forestry and fishing are the main industries, and the region’s population density is just 18 per square mile, compared with 8,620 for the city of Seattle.

Bellingham, where average home prices just topped $500,000, is the epicenter of Whatcom County’s booming housing market, says Chuck Occhiogrosso, Coldwell Banker Bain’s top-selling local agent. Many of his customers are Seattle expats. “It’s a college town, a safe town. With everything that’s been going on over the past year, a little town like Bellingham looks pretty good.”

In Ferndale, buyers are scarfing $500,000 to $600,000 homes in two new subdivisions, which is a notable turn-around for the local home market. “Before this, there’s never been a development in Ferndale where the developer didn’t go bankrupt,” Occhiogrosso says. “If you’re willing to drive 10 minutes to the north, you can save $100,000 from what the same house would cost in Bellingham.”

For Catherine Boys and her husband, Cameron, Blaine fit the bill. Located 26 miles north of Bellingham along the Canadian border, the 5,500-resident town offered the couple three key selling points over their former location in Renton: an acre of land, nearby family and the opportunity to work from home. “We had some cool opportunities. We didn’t need to be in the metro area any longer,” she says.

Like the Kleins, the Boyses loved living in the Seattle area, but Cameron, a computer professional at Seattle legal services firm Lighthouse, received permission from his employer to work remotely on a permanent basis. Catherine, who describes herself as “outdoorsy,” calls the property, which overlooks Semiahmoo Bay, “beautiful, with a great view at an excellent price.”

“It was a rare case of an opportunity in the pandemic,” says Catherine, who attended nearby Western Washington Uninersity. “We have the best of both worlds up here. It’s the perks of rural living but it’s also close to [Vancouver]B.C.”

Issaquah — Pop. 40,000
Just 25 minutes from Seattle, Issaquah remains a desirable market. Prices have skyrocketed 16.2% in the past year, according to data from Seattle-based online real estate marketplace Redfin, which called the market there “very competitive.” “Hot” homes on average go for 7% above list price and become pending sales in just four days.

Rick Lawton, owner of RPM Partners, a company that consults with developers and homebuilders, calls the market “pretty chaotic.” He consults with the developer and homebuilder on the Panorama development at Talus five miles from Issaquah. The luxury homes start at $1.7 million and there’s a long waiting list.

“Our buyers are dual-income, and they’re looking for somewhere they can work and play in their home,” Lawton says. “They need a work environment and they need space to tutor a child at home.”

A prospective home buyer who was priced out of the Snohomish County market was able to find an unimproved flat parcel for $135,000 in Mount Vernon in Skagit County, says Coldwell Banker Bain agent Debra Hamilton. The land is slightly more than an acre, approved for manufactured housing, and within 200 feet of both water and electricity. The market is more expensive in nearby Everett. One recent seller was asking $565,000 for a house that would have sold for $450,000 in 2018. The final purchase price was $650,000. “The market has just gone crazy,” Hamilton says.

Granite Falls, eight miles northeast of Lake Stevens, is also a hot spot, despite its small school district. A developer just bought a 91-lot parcel in Stanwood, which recently remodeled its high school and offers great access to Puget Sound. The average home price is pushing $500,000, Hamilton notes. “It has a good school district and is kind of untapped, so far.”

Another NWMLS-designated “Zoom town,” Wenatchee offers excellent public and private schools and a superb hospital, says Laurie Boyd, a Coldwell Banker Bain agent with homes in Seattle and Wenatchee. A townhouse or smaller home in Queen Anne might cost close to $1 million, “which will buy a huge house on a nice piece of land with amenities in Wenatchee” [median home listing price $368,000],” Boyd says.

An increasing number of Boyd’s Seattle clients want to locate in north-central Washington, including Leavenworth, which offers a closer commute to Seattle and also to Chelan, about a 25-minute drive to the heart of one of the state’s best recreational areas.

Ray Johnston and his wife, Mary, started building their home in Twisp in north-central Washington’s Methow Valley 16 years ago. They decided to move there permanently last year because of the pandemic. The Johnstons, who own Seattle architecture firm Johnston Architects, travel to their office in Seattle once a month but now run their company remotely.

The benefits of living in the scenic area go well beyond great vistas, deer sightings, visits from the local bobcat and the treasure trove of nearby recreational activities. Johnston says the couple has become completely embedded in the cultural and social fabric of the local community.

“The opportunities to give back are a little less personal in the city,” Ray says.

“It’s pretty rewarding living in such a small town.”

As the migration trend suggests, many clearly agree.