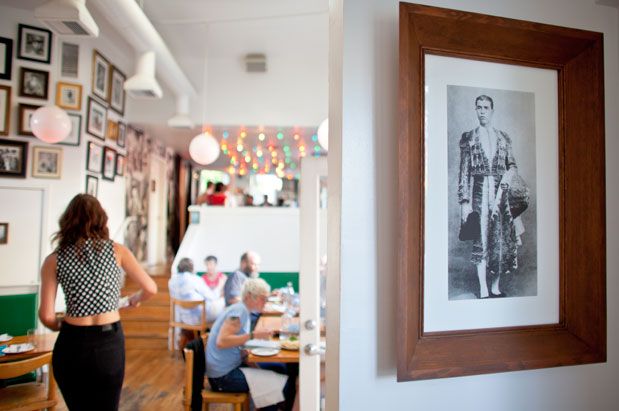 Like a lot of restaurants that have been around for more than a few years, it’s been a while since anyone has thought twice about The Saint (1416 E Olive Way; 206.323.9922; thesaintsocialclub.com). When it opened in April 2008, it was this cool, superhip and pretty tequila bar on Capitol Hill that specialized in Mexican food. Now, once again, owner Quentin Ertel, who also owns nearby Havana, is bringing his tiny turquoise and white cantina back into the spotlight. Nearly six years to the day he opened The Saint, he made the genius move of hiring Álvaro Candela away from restaurateur Matt Dillon. For those not already familiar with Candela’s work, he has been the guy behind the hugely popular Monday taco nights at Sitka & Spruce for the past three years. I haven’t been this excited about tacos in…forever.

Mexico City–raised Candela reworked The Saint’s menu to include his favorite traditional tacos, which are arguably superior to any others in Seattle. His personal favorite is the al pastor: three tiny tacos in corn tortillas (the flour variety doesn’t exist here) topped with marinated, spit-roasted pork, pineapple, onion and cilantro. It’s a great taco, but there are so many others I enjoyed more, like the trucha tacos ($12), featuring garlic-fried trout, cabbage and pico de gallo. The small, thin fish makes for a really wonderful taco—not too big, mild in flavor, and it doesn’t overpower the toppings. And the suadero ($11): beef belly, the bacon of the cow, is topped with roasted tomatillo salsa, cilantro and red onion and has an overwhelming melt-in-your-mouth quality. The richness of the fat is a beautiful thing and should be enjoyed hot. What all of these tacos have in common is that they’re unctuous and salty, with just the right amount of acid and heat. If anything could elevate these already satisfying tacos, it would be an extra little accent. This isn’t a place where you’ll find hot sauce on your table—the tacos come already seasoned to the chef’s liking.

The Saint has always been focused on the wonderful food and drink of Mexico, but now, with Candela on board, it means that much more to the neighborhood, where tacos haven’t exactly reigned supreme—until now.