Tech Addiction Is on the Rise in Seattle and Beyond

When a Seattle boy couldn’t stop playing video games, his parents came to a hard truth: Their son was addicted. And he’s not alone. In our tech-focused city—and the nation—more people are seeking help for this condition. But there’s no easy fix. 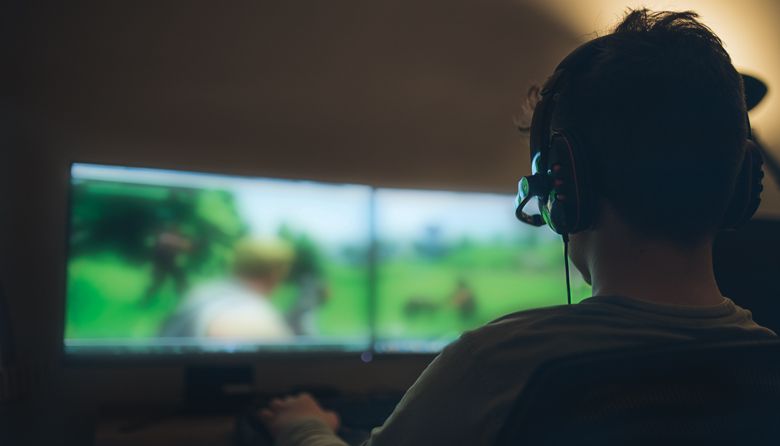 All portraits by Hayley Young

This article appears in print in the June 2019 issue and is produced in collaboration with Crosscut. Click here to subscribe.

* The names of the family members have been changed to protect their privacy.

Laura and Dave Johnson* had always known that their older son, Eric, was different than other kids. Diagnosed with severe ADHD at a young age, Eric was smart, sensation-seeking and focused—the kind of kid, his mother says, who has “a brain for coding,” and is “smart in a way that we don’t understand yet.”

If he wasn’t racing his mountain bike downhill, he was bouncing parkour-style off the sides of downtown buildings or watching television with an intensity that unnerved his parents. “He could watch TV all day long,” says Laura Johnson.

Then, like most of his peers, Eric discovered video games—Mario Kart, Splatoon (a third-person game in which players splatter each other with ink), The Legend of Zelda. After that, Johnson says, things were never the same. Unlike most kids and adults who play video games, Eric, now 15, didn’t seem to have an “off” switch. By the time he was in middle school, games were all he could think about. It was like the games were doing the same thing for him that mountain biking did, Johnson says. “He likes that tactile [sensation] and he needs his brain to go fast and he needs feedback from something.”

The Johnsons live in a comfortable brick Tudor in Seattle’s Broadview neighborhood. There’s one TV in their house and just two computers: a desktop in the basement that Dave uses for work and Laura’s laptop. The idea that video games could become a problem, much less an addiction, was completely alien to them. Over time, though, they began to realize that their son’s fascination with games and other screens resembled an addiction. “He rushes through other things if he knows there’s ‘game time’ in his future,” she says. “And that ‘game time’ is on his mind [until] he gets it—regardless of what we are doing.”

While gaming—or tech—addiction is uncommon (and the label “addiction” remains controversial), Eric is not alone. Dr. Dimitri Christakis, director of the Center for Child Health, Behavior and Development at Seattle Children’s Research Institute and professor of pediatrics at the University of Washington School of Medicine, estimates that between 5 and 12 percent of young adults show signs of gaming disorder; a 2017 paper in the American Journal of Psychiatry, meanwhile, put the number at less than 1 percent of the general population.

The jury is still out on whether tech addiction is more prevalent in places like Seattle, where a higher-than-average number of people work in the tech industry, but anecdotal evidence suggests there could be a correlation. Hilarie Cash, the founder of a Fall City–based inpatient tech addiction treatment program called ReStart, says that when she started treating people for gaming disorder, back in the mid-1990s, most of her patients were adults working in the tech industry; today, she says, many of her clients have parents who work in the industry and who “tend to be very surprisingly oblivious to the impacts of screens on child development.”

Experts generally agree that too much screen time can inhibit kids’ ability to focus, develop social skills and engage in activities that don’t produce an immediate reward the way screens do. Cash also points to school districts in large, highly connected cities that, she says, have “drunk the Kool-Aid and are trying to get tablets and computers in the hands of every student, even in elementary school.”

In recent years, there has been significant interest in recognizing gaming disorder as a formal diagnosis, spurred largely by an international uptick in people seeking treatment for the disorder. Last year, the World Health Organization officially recognized gaming disorder as a condition in its International Classification of Diseases, and the American Psychiatric Association, which publishes the Diagnostic and Statistical Manual of Mental Disorders (DSM), has recognized “internet gaming disorder” as a “condition for further study” for possible future inclusion in what’s often called the bible of psychiatry. The state of research remains in its infancy, however, and experts disagree on everything from the best course of treatment to whether compulsive gaming should be classified as an “addiction” at all.

For the Johnsons, their attempts to curtail Eric’s obsession with gaming began by trying to restrict his access to technology. They established boundaries, one after the other—no games until he’d done something creative, or no more than an hour of gaming a day—but Eric broke every rule. “I tried so many different scenarios,” Johnson says. “No boundaries ever worked. Nothing ever worked.”

Over the course of Eric’s seventh-grade year, this “very smart, very savvy…fascinating” kid transformed into a person his parents barely recognized—a kid who spent all his time “speedrunning” (playing through games as fast as possible) and throwing fits when his parents tried to restrict his access to games. “He would run away,” Johnson recalls. “He jumped out of the car once while it was moving.” After the Johnsons took away his smartphone, Eric stole money from his brother, who is three years younger, got off the bus on the way to school and bought a second phone. (Then, when they took that phone away, he did it again.)

At their wits’ end, the Johnsons sought advice from Ann Steel, a counselor who specializes in gaming addiction. Following her advice, they sent Eric to a wilderness camp on the Olympic Peninsula—an increasingly common, if still unproven method of treating kids whose gaming or screen time starts to negatively impact their lives—shortly before his 13th birthday. On his final night before he left for camp, Eric stole his mom’s laptop and stayed up all night surfing the web, like someone getting a last fix before going to rehab. After 10 weeks in the wilderness, Johnson says, Eric “did seem clearer in his head.” On the other hand, the day after he returned, he broke Johnson’s windshield.

Last year, after doing more research about its options and hiring an education consultant, the family sent Eric to Cherry Gulch, a therapeutic boarding school outside of Boise, Idaho, that offers individualized education and treatment to kids struggling with various issues, from grief to ADHD to digital addiction. Johnson says her son is doing well. After a year at Cherry Gulch, she says, “his growth has been huge. The most growth we’ve had in his 15 years of life.”

Still, it’s unclear what his parents will do when Eric graduates from Cherry Gulch this summer, and how they’ll keep him from slipping back into his old habits when he returns. He’s just coming to terms with the fact that he has an addiction to gaming and screens, Johnson says. “He isn’t quite at the acceptance phase.”

The notion that it’s possible to be addicted to video games, or any type of technology, has gained mainstream acceptance in recent years. Like gambling—the only behavioral addiction currently included in the DSM—video games seem to trigger some of the same chemicals in the brain as alcohol and illicit drugs, including dopamine, the so-called “reward neurotransmitter” of the brain. But games (and social media such as Instagram and Twitter) have an additional characteristic that makes them habit-forming: They provide that kick of dopamine at unpredictable intervals, providing an incentive to stay glued to the screen.

Think of it as a lab experiment, says Christakis. “If you try to condition a rodent to push a lever when a stimulus comes, and they get a reward every time, it doesn’t create an obsession,” Christakis says. Make the rewards unpredictable, and the rats are “much more likely to become compulsive. The reward could come at any second, and they might miss it if they aren’t paying attention.”

Gaming also gives people something of value that they may be missing in their lives—whether a person is a smart kid craving stimulus and mental challenges, like Eric, or an adult who lacks a sense of accomplishment in life. Alok Kanojia, a Boston psychiatrist who specializes in gaming disorders and says he was once addicted to video games himself, says, “People will play 40, 60, 100 hours of World of Warcraft”—a massively multiplayer online game, or MMO, in which people cooperate and compete with each other in real time— “and they derive a sense of value out of it. You may feel like you’re no one in the real world, but you’re someone in the game.” Just playing a lot of video games is not enough to qualify someone as an addict. But if someone is playing compulsively despite negative consequences, or neglecting school, work or personal obligations, there might be cause for concern.
Young men are particularly susceptible to gaming addiction, although opinions differ about why that is. Steel, a former family medicine physician and licensed mental health counselor, says games “provide a really full spectrum of what young men are often looking for,” particularly bright, introverted young men, including “competition, a sense of accomplishment and mastery, fun, independence, intellectual stimulation and social interactions.”

Other experts, including Kanojia and Christakis, argue that girls are just as susceptible to tech addiction as boys are, but tend to gravitate toward social media—perhaps because game companies haven’t figured out how to target them yet. “I think it’s just a matter of time before the gaming industry figures out that, ‘Gee, we’re missing 50 percent of the market here, and why don’t we start to develop platforms that have appeal to the female gender?” Christakis says.

As kids’ use of video games and other forms of digital media has risen, so have rates of depression and anxiety—twin trends that some experts believe are intertwined. Steel says that many of her own clients discover that once they stop playing games around the clock, their depression or anxiety goes away, suggesting that the addiction was causing the depression, and not the other way around. Others believe kids and young adults turn to video games as a response to underlying issues that aren’t being addressed.