This article originally appeared in the January 2014 issue of Seattle Magazine. 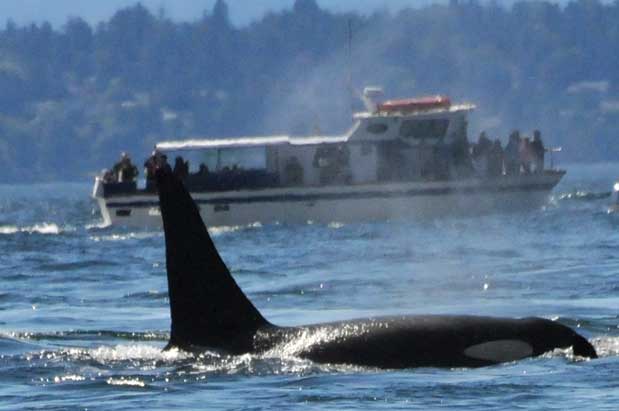 !–paging_filter–pAlong the western shore of San Juan Island, across Haro Strait, the view that most people observe when the killer whales are present is generally a placid one: The only noises are the sounds of the currents rushing, the “koosh” of the whales as they surface and blow plumes into the air—although at times, the calm is broken by the engines of the boats, sometimes 30 vessels at a time, that come crowding around the whales to get a close look at them. If there are large ships in view, they are mostly distant and seem almost silent as they glide past.brbrBut drop a hydrophone into those same waters and the picture changes dramatically. There will be whales, all talking in their distinct Southern Resident dialect to each other and echolocating for fish. There will be the whale-watch boats, whose engines are mostly short-lived whines and low-level thrums. And then there will be large cargo ships. Because sound travels so well in water, a ship or a orca can be heard across great distances. The underwater sound of a loud ship passing a mile or two away produces a sound that compares to the sound a chainsaw might make in the air. brbrVal Veirs, a semi-retired physics professor, listens to all this racket, and monitors and records it with an array of hydrophones he has set up off his waterfront home on the west side of San Juan Island. What he and his fellow scientists have found is that killer whales will more often than not increase the volume of their vocalizations when there is higher background noise from boats and ships around them. Researchers at NOAA Fisheries are still studying whether whales fall completely silent because noisy ships are around. brbrBut, according to Veirs, it’s inevitable that these noise levels—particularly the high-frequency component of ship noise—are going to affect their abilities to communicate and hunt, both of which are closely connected to sound. Vocalizations not only appear to play a role in the social component of their salmon-hunting behavior, the orcas also rely directly on echolocation.brbrVeirs says the ship-noise potential for all this traffic worries him when it comes to the whales. “Right now, about 60 percent of the time, there’s no ship within hearing range,” he says. “But if you put a couple thousand more ships per year in there, it seems to me you’ll end up with about 30 percent of the time…that the whales are able to communicate without interference from vessel noise.”nbsp;/p