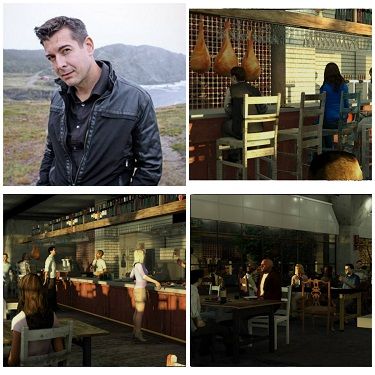 A first time restaurateur with a background in 3-D animation and a penchant for modernist cooking is opening a restaurant on Capitol Hill this fall.

Chris Cvetkovich gave me a tour yesterday of his upcoming project on 14th Ave. (in the REO Flats) that will be sandwiched between Artusi and Porchlight Coffee.

Because Cvetkovich is a big traveler, the new place will be a playground for international street food.

“Every country that I go to, there’s some cool bite that you get on the street or you get in a café, but for whatever reason, nobody brought it back to the United States,” he says. “Some of them because they’re weird, like squid beaks. A lot of that stuff isn’t necessarily delicious, but it’s crunchy or has a good sauce under it.” Like a bowl of deep-fried dragon flies he had in China that he says was fantastic. You won’t see that on his menu, but there will be world flavors—influences from Korea, Africa, Saudi Arabia, South America and the like.

“What surprises me is how many of these foods are not challenging foods. For example, every country has a grilled meat. They throw something on a kebab and grill it, it’s just different spices, different meats, different grinds; I want to bring that back and simplify it that way.”

The name of Cvetkovich’s restaurant is Nue.

“Nue is this mythological creature that has the body of a tiger, the head of a monkey and the tail is actually a snake. So it’s this conglomeration of different parts that creats a cohesive whole and that’s kind of what we’re doing here. It also means ‘new’ in Spanish, and our menu is going to be new and change a lot of the time. Nue is also French for ‘naked,’ but I haven’t quite figured out how to incorporate that!”

Cvetkovich will be doing a lot of the cooking, but he has also just hired an executive chef, who will be coming on board at the end of November.

Nue will be a small, casual place with about 30 seats, an open kitchen, a bar and a walk-up window for take-out items and liquid nitrogen ice cream.

There will also be a bunch of hanging Mangalitsa pig legs scattered about.

“I’m trying to make really, really good, simple food. I do like a lot of the Modernist [Cuisine] cooking and whatnot, and I’m going to be using some of the techniques, but you’re not going to know it. There’s not going to be some big show of smokes and foams and bubbles—it’s simple street food.” Except for maybe that LN2 ice cream.

Nue will be open for lunch and dinner and late-night eats courtesy of the walk-up window. Hours of operation haven’t been figured out yet.

In addition to running Nue, which best case scenario will open December 1, Cvetkovich will be busy with a 3-D animation business he recently started that focuses on the food science industry. Check out his blog, Things About Food.