One Year Later: Cafe Racer and the Gun Control Discussion

This article originally appeared in the May 2013 issue of Seattle Magazine. 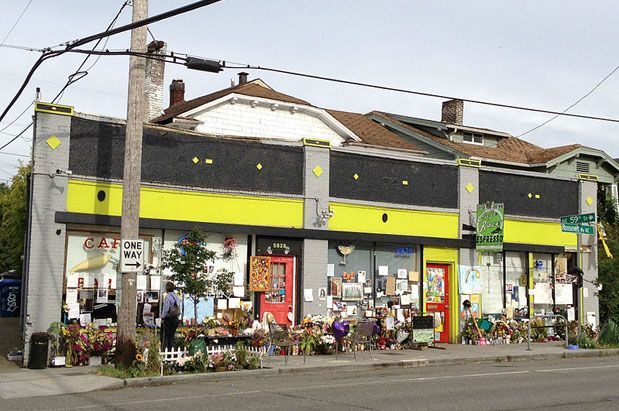 Walter Stawicki remembers exactly where he was on May 30 last year, when his wife called to say she’d just seen a surveillance photo of their son on the news: Ian was holding a gun inside Café Racer, where five people had reportedly been shot. “I was on the freeway…around Northgate,” Stawicki recalled in an interview with Seattle Community Media. “I was going to get off at 50th and University,” less than a mile from the café. In the following hours, as his family absorbed the shock of the day’s events, Ian would evade a massive police manhunt, eventually killing one more person and later himself.

Stawicki says his son Ian had become increasingly socially isolated in the three years leading up to his death. He held extreme views about others and would use dehumanizing speech in front of his family. “His mother would ask him to stop talking like that, and he would,” Stawicki says. “He had a piece of control in those situations, but somehow that control didn’t click in that morning at the café.”

Since the shootings, Stawicki has become outspoken on behalf of the families of people who have mental illness. “If the child is seriously needing help and isn’t going themselves, the parents need strategies and somebody to help them work to get that child to the point of accepting help,” he says. “I would have liked a lower barrier for [Ian] to be held and evaluated.”

The first anniversary of that terrifying day in Seattle comes at a time when the nation is struggling with the overwhelming problem of gun violence in our society. The shooting last December of 20 children and six adults at Sandy Hook Elementary School in Newtown, Connecticut, sparked a push for gun control and a heightened focus on the much-debated connection between mental illness and gun violence. In response, state lawmakers are considering changes to policy that will impact not only gun ownership policies but also mental health care. The conversation

includes everything from improving access to mental health care to changing the criteria for forced psychiatric evaluation.

For years, the National Rifle Association (NRA) has been quick to emphasize evidence of mental illness when an incident of gun violence captures the public’s attention. At a press conference the week following the events in Newtown, NRA executive vice president Wayne LaPierre questioned why the federal government refuses to create a national database of the mentally ill. “The truth is that our society is populated by an unknown number of genuine monsters,” he said. “People that are so deranged, so evil, so possessed by voices and driven by demons, that no sane person can possibly ever comprehend them.”

The media is also quick to question the mental health status of gun shooters, says Amnon Shoenfeld, director of King County Mental Health, Chemical Abuse and Dependency Services Division. “When things happen like Sandy Hook, people are grasping to understand what would cause someone to do something like that, and because of the horrendous nature of that kind of violence, a lot of people jump to the conclusion that they are mentally ill,” he says. “It creates in the public mind the perception that people with mental illness are dangerous.”

While it may provide easy answers to an uneasy public or a diversion from topics like universal background checks for all gun purchases, the linking of mental illness with gun violence intensifies a pervasive stigma against people with mental disorders. In January, The New England Journal of Medicine published a report on two national opinion polls conducted just weeks after Sandy Hook showing that almost half of respondents believed that people with serious mental illness are more dangerous than members of the general population. A higher percentage, 71 percent, said they would not want to work closely with someone with a serious mental illness, and 67 percent said they would not be willing to have a person with a serious mental illness as a neighbor.

Other factors such as drug and alcohol abuse significantly increase the risk of violence. People with no mental disorder who abuse drugs and alcohol are more than seven times as likely to be violent as those who are not substance abusers. “And yet there’s been no discussion that I’m aware of among policy makers at the state and federal level or among the media about the need to provide more access to drug and alcohol treatment,” Shoenfeld said at a February Town Hall meeting in Seattle titled “Gun Violence: A Public Health Crisis.”

Shoenfeld noted higher risk factors that are predictive of future violence at the Town Hall meeting, including a history of being abused or victimized, social isolation, unemployment, criminal history including a history of juvenile detention, and recent divorce or separation. And yet, the difficulty in influencing public perception on this score was illustrated at that very meeting. After Shoenfeld made a statistic-rich case for the fact that mental illness does not equal gun violence, at least one member of the audience told a Q13 Fox News reporter, “It’s about mental health issues and easy access to guns.”

Carl Bell, director of the Institute for Juvenile Research at the University of Illinois–Chicago and a nationally recognized expert on violence prevention, says the media plays a big role in skewing public perception. He notes that events like the Café Racer and Sandy Hook shootings are actually extremely rare, but they get a lot of attention. “It leads people to believe that the exception to the rule, is, in fact, the rule,” he says. People then want to identify people who might become violent, a task Bell says is actually very difficult to do.

Still, the push to lower the barriers for involuntary treatment, as called for by Walt Stawicki, has gained traction. In 2010, Washington lawmakers did in fact make substantial changes to the state’s Involuntary Treatment Act. They altered the criteria under which a person could be held for 72 hours against their will for psychiatric evaluation from presenting an “imminent danger” to themselves or others to presenting “a substantial likelihood of harm” to self or others.

The new standards seemed like a win for relatives of people with mental illness who have complained that the imminent danger criteria made it impossible to get a loved one help before they were in crisis. However, lawmakers in Olympia had delayed implementation of the bill until July 2015 to give the state time to build capacity in an already overcrowded mental health system.

Now thanks to momentum created by the gun control debate, lawmakers are considering an amendment to implement the law a year sooner. Cassandra Ando, chair of the public policy committee of National Alliance on Mental Illness Washington, says there is a notable increase in bills related to mental health care under consideration in Olympia this legislative session. “It’s an opportunity, but it’s a double-edged sword,” she says. “We don’t like the pairing of mental illness and violence at all.”

Amnon Shoenfeld agrees. After four years of sizable budget cuts, he would welcome more resources for mental health care. “But I don’t want it to be done because of this fear that people with mental illness are violent and we need to lock them up and commit them against their will more often,” he says. “Instead, we need to provide the kinds of services that are going to get them the help they need and include them in our community rather than exclude them.”

Stacey Schultz is a Seattle-based writer and editor with a background in covering medicine and mental health. She has also written extensively about parenting, religion and science for websites and magazines, including National Geographic News; Brain, Child; and U.S. News & World Report.