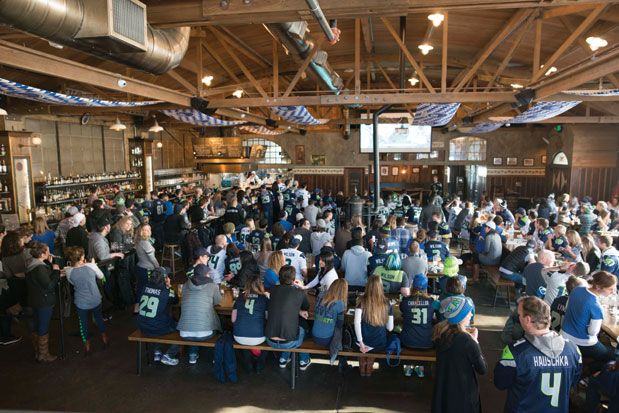 So, I waited nearly three months after the hall’s September opening to take my family (hooray for another spot you can have a beer and bring the kids) and was pleasantly surprised. I liked the prompt service and authentic feel of the 7,000-square-foot open space, from the 14-foot community tables, the intentionally scuffed-up tiles and German signs, to the comprehensive beer program (nearly 60 hard-to-find imports and local craft brews) and generous Austro-Hungarian style dishes. Wild boar brat from the grill

The brats? They come from Bavarian Meats in Pike Place Market and Nicky Farms (Portland), and they’re delicious, especially the snappy wild boar one-third-pounder ($14 with fries, sauerkraut and Macrina rye bread). But, I agree with the aforementioned critics. Even though the intention is to get people up and milling about like they did in old-time beer halls, it is annoying to pay cash for one part of your meal when you plan to use plastic for the rest. Next time, I’m taking cash and going on a Thursday night to hear live music (jazz and bluegrass, according to the event calendar) and just eat sausages. Lower Queen Anne, 203 W Thomas St.; 206.659.4043