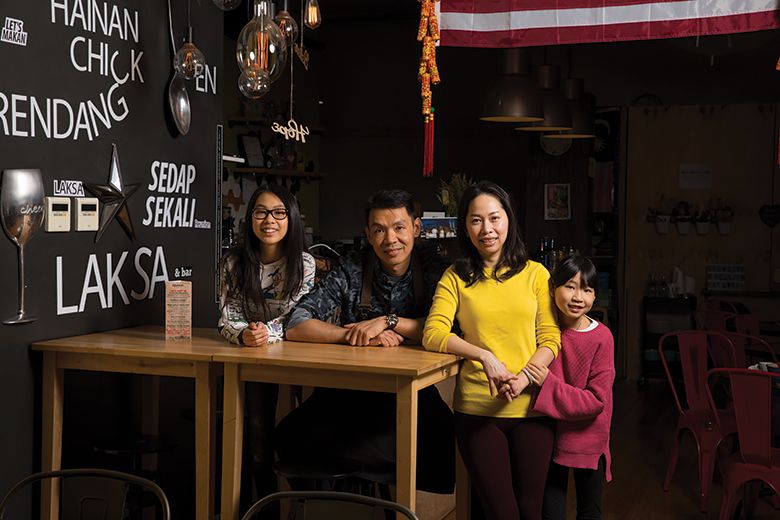 This article originally appeared in the April 2019 issue of Seattle Magazine.

Robert Tju didn’t set out to open a Malaysian restaurant. Tju and his wife, Grace Ting, moved to Seattle from Little Rock, Arkansas, in 2016 to be closer to family. In Little Rock, he had been the managing partner of a Japanese restaurant, but after the move, the couple decided to open a café with Ting’s brother, Francis, who already lived here.

It’s a transition that mirrors Tju’s career. “I didn’t know how to cook Malaysian food,” he says of the time when he arrived in Little Rock at age 20 to go to school. He didn’t really know how to cook at all—but as he studied, he worked in restaurants, eventually becoming a sushi chef and restaurant owner. He also tried to learn how to cook the dishes he missed from home, finding what information he could on the Internet, watching food television and learning from phone calls back to Malaysia. But moving to Seattle was a big help in transferring what he had learned to the kitchen.

“At least we can find all the ingredients here,” Tju says, noting that while there aren’t many restaurants in Seattle that offer Malaysian dishes (he believes Reunion is the only Malaysian-owned Malaysian restaurant in the area), local Indian, Vietnamese and Thai grocery stores carry ingredients that help him stay stocked with what he needs. That says a lot about what Malaysian cuisine consists of: the curry-style spice pastes like those found in India; the fresh, bright herbs of Vietnamese food; and the same hot-and-sour, sweet-and-salty mix that characterizes Thai food.

Over time, to please his customers, Tju has learned to re-create the Malaysian street food staples of his childhood, including laksa, a noodle soup with coconut milk curry. “There are thousands of different variations of laksa,” he says, and the beauty of laksa is that it can take on any form, with almost any ingredients. The laksa he serves at Reunion speaks to his own journey: made from his grandmother’s recipe, using the ingredients he finds in the Pacific Northwest and tweaked to match his own memories of growing up in Malaysia. 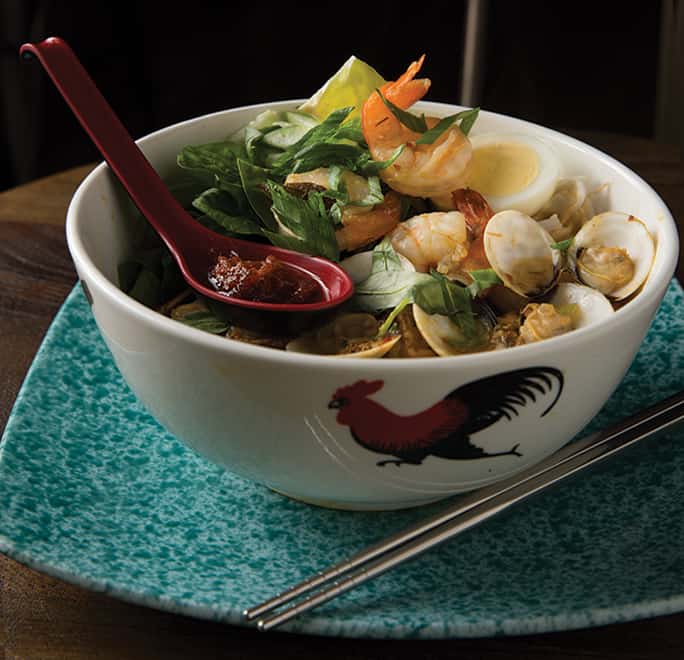 “It only gets better as it sits,” says Tju of the soup base for his laksa, so he encourages anyone making this to make it ahead of time—two days in the fridge will only improve it. As for what goes into the soup, he uses rice vermicelli noodles at Reunion, but says any kind of noodle works, including ramen noodles. He also includes blanched bean sprouts, shrimp, tofu puffs, a hard-boiled egg and fish balls, but, again, anything goes. “Each person can even customize it at the table,” he suggests. For garnishes, he uses chopped limes, cucumber slices, scallions and a few herbs, including the one he says is most important, rau ram (Vietnamese cilantro). The key, he explains, is in the sambal paste, which the diner stirs into the soup base. Everything else is up to the cook—or diner.

To assemble your soup, just heat the broth, add your ingredients and garnish. Stir in a spoonful (or more!) of spicy sambal paste just before eating.

Blend all of the ingredients together except for the oil. Use a little bit of water to loosen the mixture as needed to make sure the blender can power through the mix. Heat the oil in a small pan over medium heat and sauté the paste until fragrant and darkened, about 15–20 minutes. Add salt and sugar to suit your taste.

In a blender, combine the chilies, shallots, nuts, lemongrass, shrimp paste, turmeric and galangal together, adding water as needed to keep things moving, to make a paste. Heat the vegetable oil in a heavy stockpot over medium heat and add the paste, cloves, star anise and cinnamon stick, and sauté until fragrant, about 15–20 minutes. Add the stock and coconut milk and bring to a boil, then either add remaining ingredients to eat immediately or refrigerate until ready to use.