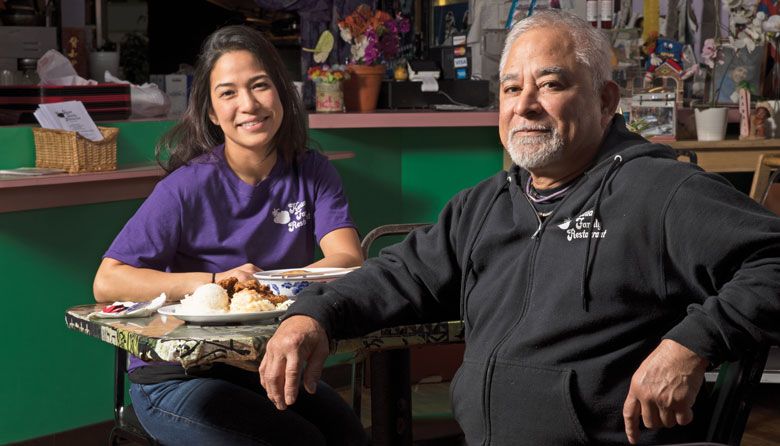 Kauai Family Restaurant opened to little fanfare on November 1, 1993. Recently divorced, owner Peter Buza had moved to Seattle from Hawaii, joining his mother and sister on the mainland. He bought the Georgetown restaurant from a Korean woman, keeping her menu of mostly fish and chips, burgers and teriyaki, but renaming the eatery for the island he had left behind.

Twenty-five years after opening, the menu looks a bit different: loco moco, Spam musubi, chicken adobo, saimin and curry tripe stew. Seattleites count on the strip-mall spot for a taste of island life and hearty Filipino and Japanese comfort foods. Buza’s daughter, Randi, now partner in the restaurant, explains that one day shortly after they opened, a Hawaiian longshoreman stopped in (prompting more Hawaiians to come in) and asked why this Hawaiian man wasn’t cooking any Hawaiian food. There were a few island items on the menu, but Buza was inspired to add more.

Buza already knew how to cook more than fish and chips: He’d been working at The Lawai Restaurant on Kauai, owned by his Japanese father-in-law, for years. And he had grown up and learned to cook in the Filipino labor camps where plantation workers were housed. By virtue of living in Hawaii, he learned to cook local foods: kalua pork, lau lau and lomi salmon. Later in Seattle, the new menu proved to be a hit, and Hawaii transplants spread the word about it.

By 2001, Randi—who had stayed on Kauai with her mother—had graduated from high school. She had been working at her grandfather’s restaurant for four years (alongside her mother and four brothers), but she didn’t see much future for herself on the island. So, she joined her dad at Kauai Family Restaurant, where she’s been ever since.

“For first-timers, I always recommend the Lawai chicken,” she says. “It’s my grandfather’s own recipe, named for his town, where it’s a popular dish.” The menu features dishes from her grandparents on both sides of the family—giving special meaning to the word “family” in the restaurant’s name. But the name also speaks to the spirit of the restaurant, where she and her father run a home-style kitchen, cutting all the meats themselves, and preparing the house salad dressing and teriyaki sauces from scratch. “When people order a cheeseburger,” Randi says, laughing, “I’m like ‘Ughhhhh, try something else, explore!’”

In the years since she arrived, she has seen more and more people explore the menu—ordering oxtail and loco moco (which is her personal favorite: “It’s the gravy that makes it”), the foods that she says remind her of home, childhood and family. One dish that’s a family favorite is butter mochi.

While mochi—a rice cake—is a Japanese tradition for New Year’s, butter mochi is an any-kind-of-party tradition in Hawaii: “It’s always there,” says Randi, adding that someone will always bring it to a gathering. Every family in Hawaii has its particular recipe, and the butter mochi on the menu at her grandfather’s restaurant on Kauai is from his wife’s recipe. “My mom learned from her; it’s something we made together,” Randi says. “It’s so comforting, chewy, sweet and buttery. It should be a staple in every home.” Georgetown, 6324 Sixth Ave. S; 206.762.3469

Each family has its own recipe, and the Buza family’s version is a closely guarded secret. So, the recipe below is very similar to their recipe, says Randi, “with one tiny tweak.” We may never know what’s different between the recipes, but we can say this: We tested this version and can’t imagine that there’s a better one out there. Heat the oven to 350 degrees Fahrenheit and grease a 9-by-13-inch baking pan.

In a very large bowl, mix the mochiko, sugar, baking powder and salt. In a separate large bowl, beat the eggs. Then add the milk, butter, coconut milk and vanilla to the eggs.

Slowly add the wet mixture to the dry ingredients, mixing very well. When completely incorporated, pour into the baking pan.

Bake for 1 hour. For a crispier butter mochi, turn off the oven at 1 hour, but leave them in the oven for 10 more minutes. Cut into pieces—approximately 36.

Tips
PARTY PLATTER
This recipe makes party-size portions, because—as Randi warns—this is a dish made for big groups and for sharing. Plan to bring some to friends.

RICE AS NICE
Mochiko is a sweet rice flour that you’ll find in many local grocery stores, either in the baking section or with the Japanese foods.