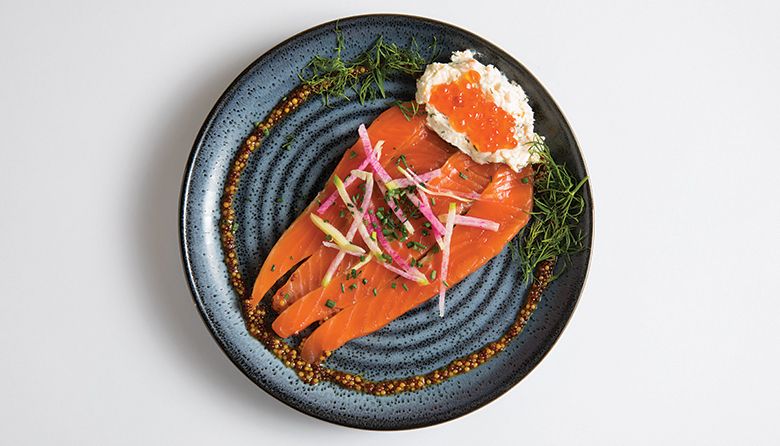 As good things often do, it started over a plate of bread and butter. As they nibbled, two chefs—award winner Jason Wilson of now-closed Crush and Seattle newcomer Maggie Trujillo—brainstormed and conceptualized both the menu (farm-fresh and hyperseasonal) and how they wanted guests to experience Aerlume, their glossy eatery near Pike Place Market that opened in late December.

They eventually landed back at the bread and butter: a welcoming restaurant that celebrates simplicity. At Aerlume, as at culinary director Wilson’s other Fire & Vine Hospitality restaurants (such as Miller’s Guild and The Lakehouse), simple food from quality ingredients is key. The bread is made with local grain and baked daily at Proven Bread and Pastry in Woodinville; the butter is churned and cultured at a farm in Duvall. Produce is grown, largely to order, by Amanda Marino of Fall City Farms, and might include a head of cauliflower, divided into parts: florets that are batter-dipped, fried, and served with raisins and red curry yogurt ($16), and leaves that are used in a sauerkraut served alongside excellent pastrami-spiced short ribs ($46). Executive chef Trujillo, whose 16-year background in hospitality has, for the most part, centered on farm-to-table cooking for restaurants and catering services in Oregon, says the relationship between farm, chef and diner is crucial: “You can really taste the difference in the food when you get it off the truck that comes from the farm directly.” Trujillo talks about farming, butchery and preserving in a way that could easily make you think she worked on a homestead, rather than in the indulgent, flashy setting that Aerlume inhabits: 5,500 square feet of contemporary design showcasing hypnotic views of Elliott Bay through west-facing, fully opening windows. Though there doesn’t seem to be a bad seat in the house, the best ones are those surrounding an indoor fire table or along the seasonal outdoor patio.

The owners of the building in which Aerlume is located first approached Wilson a number of years ago, suggesting it as a home for Crush. The timing wasn’t right then; but now, with the Alaskan Way Viaduct, right outside, rapidly being demolished, and the waterfront drawing more attention than ever, the location makes total sense.

MUST TRY: Pastas (such as dumplings paired with perfectly seared sea scallops, $46) are made by neighboring Mercato Stellina, where pasta maker Joe Obaya is a master of his trade. Chef Maggie Trujillo says they could make the pastas in house, but why would they when perfection can be found just steps away?