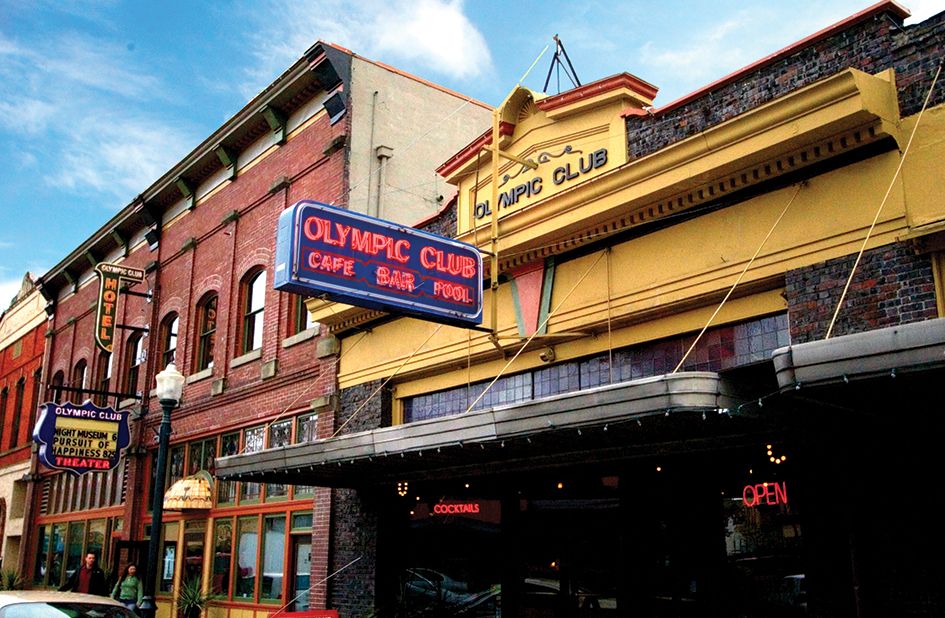 This article appears in print in the October 2019 issue, as part of the Fall Road Trips cover story. Click here to subscribe.

From Interstate 5, it’s easy to take exit 82 to visit Centralia’s outlet stores and conclude that’s all there is to this southwest Washington town. But travel a few blocks farther and you’ll hit the stroll-worthy downtown. Streets here are lined with antique stores, boutiques, coffee shops and restaurants, along with the refurbished Olympic Club Hotel, a McMenamins property. Stop inside to tour the historic building, built in 1908, and enjoy a casual meal at the hotel’s New Tourist Bar. Not surprisingly, Centralia’s historic downtown district, established in 1886 and on the National Register of Historic Places, boasts another restored property: the Centralia Square Grand Ballroom & Hotel, originally built in 1920 as the first permanent home for the Centralia Elks Lodge. The hotel’s two restaurants offer more dining options: the Berry Fields Cafe, which serves breakfast and lunch; and the Branch Bar and Public Room, where you can enjoy dinner and cocktails. Another historic building is the 1912 Centralia Train Depot, which features the ornate woodwork and red brick facade of an earlier era; today, it still serves as a stop for Amtrak trains. Nearby is Fort Borst Park, Centralia’s 121-acre signature park, which offers a variety of athletic facilities, 3 miles of recreational trails, and access to the Chehalis River and Borst Lake, which is stocked with rainbow trout.

The neighboring town of Chehalis also boasts a historic downtown of shops and attractions, such as the Vintage Motorcycle Museum. Another historic draw is the Chehalis Centralia Railroad & Museum, where you can catch a ride on a steam-powered train, choosing between short excursions, dinner-train options or other specialty rides, including the harvest-themed pumpkin train on October 26–27. The Chehalis Centralia Railroad is a must for train nerds. Photo by Gabriel Michael Photography

The histories of Centralia and Chehalis were laid by railroads, thanks to the Northern Pacific Railway, which arrived in the late 1800s. The Willapa Hills route of the old railway is now the 56-mile-long Willapa Hills State Park Trail, open to hikers, cyclists and equestrians. The path, which starts in Chehalis and winds through idyllic farmlands and forests before culminating on the coast at South Bend, is a mix of asphalt and gravel; parts are still unimproved. After a workout on the trail, enjoy a meal at Jeremy’s Farm to Table restaurant, where you’ll also find an accompanying market and fruit stand. Pick up some produce from the local harvest before heading home. TO GET THERE
Sister towns Centralia and Chehalis—approximately 4 miles apart—are about 90 miles south of Seattle via I-5.
Why we like it: This area is often used as a pit stop on a trip from Seattle to Portland, yet it offers attractions worth further exploration.
Main attraction: Bargain shoppers flock to Centralia’s outlet mall, while railroad fans seek out an 18-mile ride on a steam train along the Chehalis-Centralia railway, built in 1916.
Don’t miss: Giant, handpainted murals depicting figures from Centralia’s vibrant history grace several buildings throughout the historic downtown area, including George Washington, the African-American founder of Centralia. In Chehalis, the Claquato Church is the oldest continuously attended church west of the Mississippi, built in 1857. The Centralia Square Grand Ballroom & Hotel dates back to 1920. Photo by Kyle White