This article originally appeared in the November 2013 issue of Seattle Magazine. 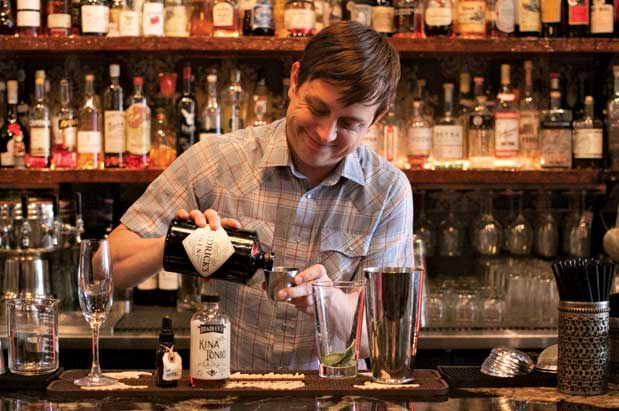 !–paging_filter–pTaking over the space that once held Noodle Ranch and then Dope Burger, Rocco’s em(2228 Second Ave.; 206.448.2625;a href=”http://www.roccoseattle.com” target=”_blank” roccosseattle.com/a)/em makes a mark on Belltown’s crowded Second Avenue corridor with its easygoing elegance, creative cocktails and unpretentious service.brbrWhile the name has a New Jersey ring to it, it’s actually the product of Seattleite Jesus Escobar, owner of Stylus Salon and the late club Noc Noc. His attention to detail is everywhere, from the beautiful faux tin ceilings to the antique beer signs, to the cocktail menus bound in charming old children’s book covers, such as emThe Visual Biography of Charlie Rich/em.brbrThe cocktail menus aren’t merely stylish, however. They’re bubbling over with a surprising array of drinks featuring out-of-the-ordinary ingredients, such as artichoke brine and avocado, alongside traditional spirits and trendily tasty imports such as the aperitif wine Cocchi Americano Rosa Aperitivo. My top pick in the “Is that really a drink?” category was the Aruglito ($9). Sadly no longer on the menu, it combined muddled fresh arugula, gin, simple syrup and freshly ground black pepper. A bit like drinking a salad, which is cool, but it was refreshingly modern without sacrificing balance and flavor. brbrThe bartenders at Rocco’s, led by bar manager Leroy Thomas (previously of Mercato Ristorante in Olympia), aren’t just avant-garde scientists. They also have a firm grasp of the classics, making a mighty fine old fashioned ($10–$18) with one of the whiskeys from the bar’s impressive selection. Plus, Rocco’s also has a dandy number of craft beers and wines.brbrWhile my focus is always on the bar first, it’s impossible to enter Rocco’s without seeing the double-decker pizza oven. They make a solid pie here, with a crust that has a firm chew and top-notch ingredients, including ricotta and house-made sausage. So, belly up to either the long wood bar or the stone bar, for pizza with a side salad in your glass./p