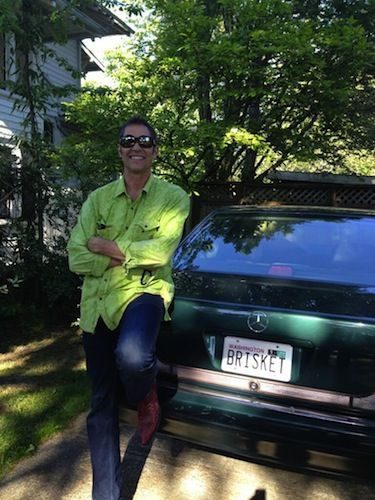 !–paging_filter–pI don’t usually get too excited about barbecue, but when a guy considered to be the King of Brisket in Seattle tells you he’s opening a barbecue joint, it’s cause for excitment. Regardless./p
pJack Timmons, whom I had the pleaure of meeting last year during a “brisket off” at his home (he was experimenting with smoking techniques on different cuts of meat, and holy shit was it good!), told me this morning that he’s taking over the old strongBogart’s/strong space on Airport Way (em3924 Airport Way S./em), situated between Georgetown’s main drag and SoDo. He’s signing the paperwork today./p
p“Because I’m doing smoking,” he says, “I had to have it in an industrial neighborhood; it couldn’t be in a residential neighborhood.”nbsp;/p
pAs Timmons’ fans already know, he’s been testing the waters for this new joint for about a year-and-a-half, with a string of barbecue pop-ups called stronga href=”http://seattlebrisketexperience.tumblr.com/” target=”_blank”The Seattle Brisket Experience/a/strong. And now, he has a place to call his own.nbsp;/p
pThe building, a convenient stop before hitting I-5, is a whoppernbsp;— about 6,000-square-feet./p
pimg src=”/sites/default/files/newfiles/jacksbbq1.jpg” width=”375″ height=”249″ style=”float: right;”There’s a main area for the bar and dining room, a private room in the back that holds about 60 people, and another area with a stage, which means shows galore. “I’ve been having musicians play my events, like Vince Mira — the young guy who sings like Johnny Cash. He’s amazing!” Timmons also talks of having a monthly burlesque show./p
pAnd because the parking lot is also huge, Timmons is going to shuttle people to football games and possibly sell season packages that include dinner, drinks, rides to the game, more drinks, etc. The ginormo-trifecta will be completed by a smoker that will sit outside. “So when you walk in, you’ll see this giant steampunk, humungous smoker that I just got.” Check out the photo below. It’s 21-feet long, 6,000-pounds, and so herking, it needs to be towed with a one-ton truck. “It’s very Mel Gibson emMad Max/em!”/p
pBack to the bar. There’s about 15 seats, none of which will be the site of any fancy crafty cocktail sipping. Timmons wants to keep his menu simple. “I’ll do a Manhattan. You rim the glass in Scotch, so it’s a smoky Manhattan. Kind of hard to do, but it’s delicious and I’d call it something like The Austin Statesman. I do martinis, I always put in a pickled okra. I’ve been doing it all my life. The Texas-tini. So something simple, but a little nuanced. Good bourbons, beers — local beers and always a cheap beer, like Oly, and a couple of Texas beers.”/p
pimg src=”/sites/default/files/newfiles/jacksbbq3.jpg” width=”375″ height=”211″ style=”float: left;”/p
pDaily lunch and dinner service will feature barbecue, of course, but Timmons gets hugs for his side-dishes, which include: remoulade slaw, Texas caviar (black-eyed pea salad), corn pudding, greens, beans, mac and cheese, and central Texas dessert classics, like vinegar pie (an old Southern custard pie with a little vinegar twang to it),nbsp;banana pudding and pecan pie. Good lord./p
pDown the road, Timmons will introduce breakfast. He’s excited about tacos, “like they do in Austin and San Antonio. All those guys going to work will love ‘em, with chopped up brisket or pulled pork, you know? I think a couple of breakfast tacos for five or six-bucks and a latte and you’re on you way.”/p
pJack’s BBQ joins Brendan McGill’s a href=”http://www.seattlemag.com/brendan-mcgill-has-broken-ground-hitchcock-del…” target=”_blank”forthcoming Hitchcock Deli Georgetown/a as new lunch options in an otherwise bar-heavy area.nbsp;/p
pLook for Jack’s BBQ to open in June or July./p