A quick roundup of Seattle happenings 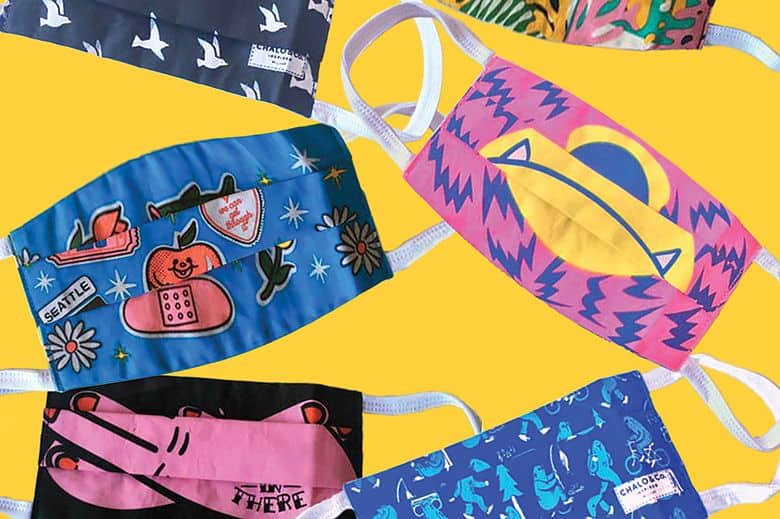 A company best known for its splashy gift baskets, totes, make-up bags, salmon packs and hand-blown glass is now offering a new and timely gift: facemasks to help protect against the spread of Covid-19. Bellevue-based Chalo – founded by designer Danialle An-Shukla – brings the same fresh, fun look to a basic cloth mask as it does to its other products, many of which are sold via Made in Washington stores. Chalo masks are colorful, whimsical and playful. The masks are 100% cotton, double-layered and designed to fit most teenagers and adults. Most cost $10 and can be shipped across the continental United States. But hurry: They’re selling fast, and some are already out of stock.

Tim Gamble and Teresa Spellman Gamble first fell in love with Seattle’s Georgetown neighborhood when their son participated in a rock-and-roll camp there a decade ago. Now, the owners of boutique Woodinville winery Tinte Cellars are planning to open a tasting room and event venue later this fall in a refurbished, 1900s-era building at 5951 Airport Way S. “Georgetown’s history as a destination for revelers from Seattle before, during and after prohibition makes it a perfect location for us,” says Tim Gamble, who notes that the new space “will be informal and flexible” and will showcase the work of local artists. During the past century, the now-revitalized Tinte Cellars Georgetown location was home to a general store, a folk-art shop, and a butchery and smokehouse. Most recently, it was a notable scooter sales and service shop whose iconic rooftop scooter has been saved, restored and will once again assume its rooftop perch. The Gambles, who created the wine label in 2018, have already made their mark on the state’s burgeoning wine scene. The winery has captured numerous gold medals in various wine competitions the past couple of years, including for its notable 2019 Tinte Cellars Rosé of Counoise.

Seattle clothing manufacturer Beyond Clothing does nothing in a basic or boring way. The expeditionary clothing outfitter has now launched a pollinator program to support bees, which the company says are critical for supporting ecological health and biodiversity in nature. The business recently installed an observation beehive with more than 60,000 bees adjacent to a garden of bee-friendly flowers that will serve as an educational tool for visitors to The Acropolis, Beyond Clothing’s headquarters and retail store in South Seattle. The company is also using seed paper for its hang tag and order inserts, embedded with lavender/poppy seeds (two of the bees’ favorite flowers). The cards will grow after they’re planted and watered. Beyond has also partnered with the Seola Bee Co., the Puget Sound Beekeepers Association and the American Beekeeping Federation to both empower their initiatives and learn from their expertise.

This is most definitely not the rickety structure you remember as a kid. The Klickitat Treehouse is a gorgeous, alpine-inspired contemporary tree house that recently opened in White Salmon, Washington, about 230 miles southeast of Seattle along the Columbia River Gorge. The 500-square-foot cabin sleeps up to six guests and features 18-foot, floor-to-ceiling windows that offer panoramic views of the surrounding forest, the valley and Mount Adams. It comes equipped with heating, air conditioning, indoor/outdoor showers and a kitchenette. The tree house is the brainchild of Colin and Taryn Mooney, who bought the wooded property in 2018 for its trees and the mountain view. Ironically, Colin’s family also operates a tree house resort in the woods of Ohio, called The Mohicans.

One of Seattle’s top local steakhouses is reopening in an historic building on the National Register of Historic Places. El Gaucho Seattle has been closed since February but is almost done rehabbing its new home, the 110-year old Union Stables building two blocks north of Pike Place Market. Its location has been on the National Register of Historic Places for seven years and was once considered among the most modern buildings west of the Mississippi. The four-story structure was originally built for the livery stables firm of Benjamin & Maddocks and housed 300 horses, who pulled streetcars and fire engines. The building was LEED-certified five years ago and has won several awards for historic preservation and redevelopment. The renovation retains several unique touches; the weight-bearing wood beams are reinforced but diners will notice the markings where horses nibbled the wood. El Gaucho’s parent company, Fire & Vine Hospitality, is also preparing to open a waterfront location at the new Hotel Indigo in Vancouver, Washington.

It’s still the water, but now it’s about vodka, not beer. Olympia Beer just launched Olympia Distilling Co., where it will produce Olympia Artesian Vodka.  As was the beer – as described in the famous slogan, “It’s the water” – the vodka will be blended using artesian water that flows from the nearby Cascade Mountains. “It’s amazing to think that we’re using the same natural water sources that they were over 100 years ago,” says Lesa Givens, a master distiller and co-leader of the company, along with master distiller Ray Watson. Earlier this year, Olympia Distilling shifted production at the new Tumwater facility from vodka to hand sanitizer, producing more than 12,000 bottles in response to Covid-19. Olympia Brewery was founded as The Capital Brewing Co. in 1896 and became Olympia Brewing several years later. The brewery was sold to Pabst Brewing Co. in 1999 and was closed in 2003.